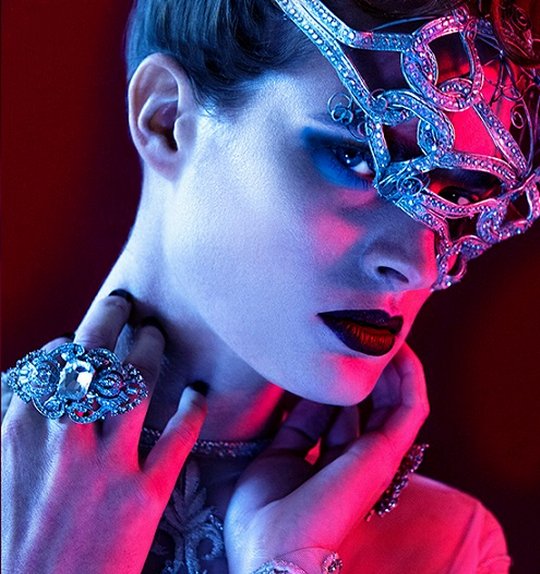 1. Tell us a little about your background and how you discovered your passion for millinery ?

I came from an Art & Design background specializing in Fashion & Textiles, which led me to study Costume at London College of Fashion. It was here that I found my passion for Millinery as I found a natural ability to create theatrical headwear.  I didn't progress on that path for a further two and a half years as I worked in retail management but I decided to leave this full time job and return to college. I had enrolled at the famous Kensington & Chelsea College where I studied all forms of Millinery.

2. What are the pros & cons of having a unique Fashion business like yours ?

The pros are creative freedom and loving what you do, and being in control of what direction you take. The cons are that a lot of work is done for free to gain exposure and it can take a lot of time and effort to get to where you want to be.

3. You have collaborated with so many designers and participated in so many fashion shows. Which collaboration did you enjoy the most & why ?

I love catwalk headwear! Taking part in shows is my favorite part of the job and I have enjoyed collaborating with every designer that I had the chance to work with. It is great to be able to be inspired by their themes and their collections but it can also be challenging; many designers have an idea of the kind of headwear they want which can limit my creativity but you have to respect that.

I would say my most favourite collaboration was with Salita Nanda as it was her first collection which was presented at the NextGen Lakame Fashion Week and was featured on Vogue.com. It was a  thrilling experience, her designs were inspired by Picasso and were so inspirational and I was allowed creative freedom.

4. What materials do you enjoy working with the most ?

I love to create with the things that people throw away, recycling and up cycling inspires me the most. My most favorite hat is a piece I made from CDs.

5. What would you describe as your typical client and typical hat ?

My typical hat client is someone who isn't afraid to stand out, infact they want to stand out from the crowd, they want something unique. The hats I create are never typical, they are always unique! I have made hats with horses on, hats with feather flowers, hats from plastic bottles, hats from CDs, and hats made from wire.

" My typical hat client is someone who isn't afraid to stand out, infact they want to stand out from the crowd, they want something unique. "

6. Are there any collections you are currently working on? What inspired it ?

I am currently working on a collection of headwear and costumes that I will showcase as part of London Fashion Week hosted by House of Ikons at the Millennium Hotel Mayfair London on September 17th 2016.

7. If you were given full creative liberty to design a hat for anyone in the world, who would it be and what would it look like ?

I would design a hat for Lady Gaga as she is very much about creativity and self expression.  I believe the piece I would make her would be something multi functional, all singing and dancing, something that would attract her more attention than she already has. I would create something unique and wacky, probably made from CDs or perhaps music sheets to represent her work.

8. In your opinion, what is the key to success in the Fashion Industry today ?

I will have to answer this when I have found the answer...I am still trying to work it out. I would say that talent is not the only thing to get you discovered. A lot of the time it is about networking, being known and recommended by others.