EERIE, DARK BEAUTIFUL & MOODY, WE CHATTED TO ARON WIESENFELD ABOUT HIS QUEST TO UNDERSTAND OUR SENSE OF BELONGING AND HOME 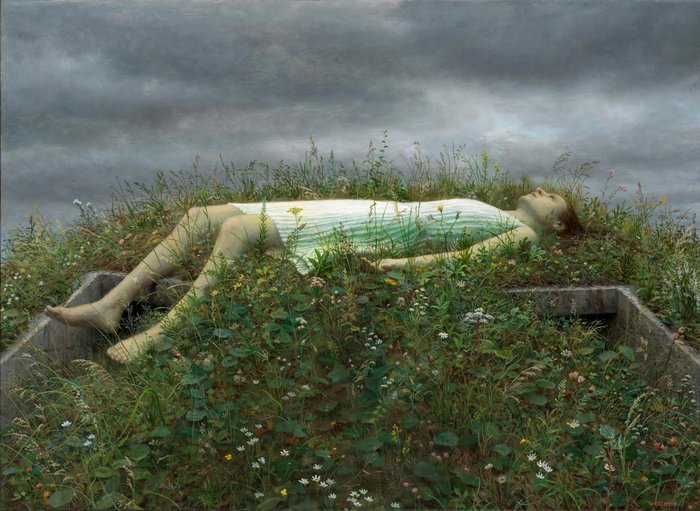 Your works are beautiful - talk us through your process, how do you create them?

Thank you!  My paintings often start from the mood of a certain place that appealed to me.  I do sketches of that, and often the sketches lead to further ideas.  By the time I start painting it, there has been a lot of working through the image already in my mind and sketches.  The actual painting is based roughly on old master techniques, starting with a toned ground, then a monochromatic layer to establish the light and forms.  The full color details take a lot of time to get right, worked out from a variety of sources usually, but I try to do as much a possible from memory and imagination.  I don’t want my paintings to look photographic. You use quite a lot of imagery of children or young adults in your works - is this to allude to the concept of innocence in children?

Partly.  It’s the fact that young adults, usually women, are in a state of change.  They are at a crossroads, and faced with a decision.  It’s a universal thing, but it’s most pronounced in teenagers. Conceptually they seem to have a longing and sadness about them - particularly some like ‘drainpipe’ and ‘greenhouse’ - is this something you strive for? What are the driving questions behind your practise?

Where do I belong? What is the meaning of home?  Will I ever be safe?  Am I created by our culture, or do I create myself?  If I feel paralyzed by uncertainty, would it be bad to do nothing?  Is there a point to questing? The colour palette of your works is quite cool, lots of browns and blues. Have you always been drawn to creating what some might call ‘darker’ works?

A dark and cool color palette seem to work well for me.  I'm drawn to the image of a bright figure on a dark ground, such as in Titian or Rembrandt.  I’ve also been very inspired by the middle tone paintings of Whistler, and the sense of night or weather that he is able to express, though I find that very difficult to do.

You’ve also put together two incredible books ‘The Well’ and ‘The Other Sky’, talk us through them; why you created them and what you wanted to give to the reader?

“The Well” was a publication of all the best work I had done up to that point.  I was really happy with the way it came out.  The images are large, and beautifully reproduced.  The publisher used top quality printing and materials.  “The Other Sky” was a collaboration with the poet Bruce Bond.  He wrote poems loosely based on my paintings, and they were printed side by side.  I say loosely because the images were only a starting point for him.  The poems went far beyond, expanding the story and space of the paintings.  The result is much more than the sum of the parts.

You’ve also just had a show in NYC - your first solo at the Jonathon Levine, whats the theme and what were you showing?

It’s 16 new paintings and drawings, it took about a year and a half to make.  The title is “Unwind The Winding Path”, which is a quote from the Keats poem “Byzantium”.  It’s really a continuation of the themes mentioned above.  It will be on view until December 17th.

Whats next for you, will you be continuing with the theme from the show? Show the works elsewhere?

Working up towards a show it’s all about finishing the work, which requires being shut off from the world, so the next thing is to change my state of mind, to be open to new inspiration.  It’s uncertain what that will be.  I’ll probably have another show in 1 to 2 years.