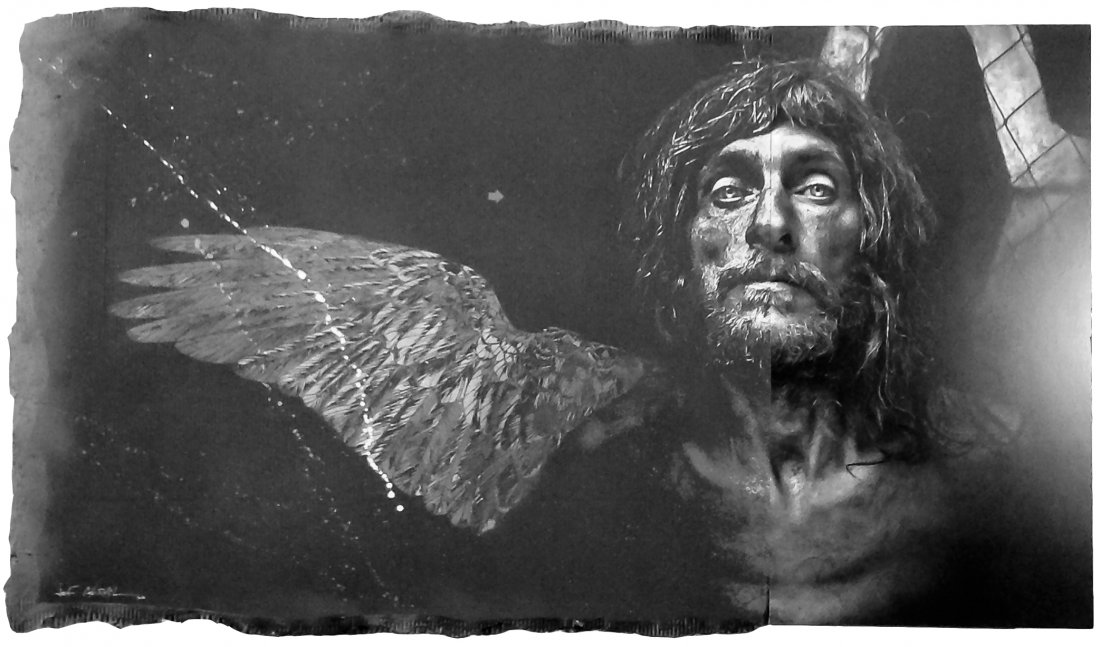 Synergy – When photography and stencil interact

[synergy: interaction of elements to produce a combined effect greater than the sum of their separate effects]

‘Synergy’ is an artistic and social encounter between street artist Jef Aérosol and photographer Lee Jeffries.

Stemming from the original ‘Synergy’ exhibition that took place in Paris at Mathgoth gallery in March 2015, this collaboration casts a new light on a sensitive topic: the homeless.

The artistic chemistry was sparked when the two artists first met in London, early 2014. Mesmerized by Lee Jeffries’ portraits of homeless people, Jef Aérosol contacted the photographer when they immediately decided to combine their work. They both felt the urge to explore and share with the public their vision of this universal issue. Together, they explore faces and confront techniques to give another life to the forgotten of the streets.

The result is an incredibly harmonious project. Lee Jeffries’ powerful yet delicate portraits lend themselves perfectly to stencilling, allowing Jef Aérosol to reinterpret the characters’ faces and stories.

The movement given by Jef Aerosol’s stencil complements the stillness and gravity of Lee Jeffries’ portraits. The detail, the singularity, the strength of the pieces will leave the audience moved and startled. The show features individual works as well as several four-handed pieces, for a combined effect that is truly ‘greater than the simple sum of its parts’.

Jef Aerosol started stencils in 1982 in France. With a few other French artists, he pioneered a new way of artistic expression - breaking the limits of gallery spaces and canvas format to make streets a free and open exhibition arena.

Characters are the focal point of Jef Aerosol’s art. Whether they are cultural icons or anonymous people, Jef Aerosol masters the technique of stencil to portray intimacy, catching the truth of an instant.

Jef Aerosol (b. 1957) lives and works in Lille. His art is present in many private collections as well as on the wall of most major cities around the world, from Paris to Shanghai. Regularly auctioned at Artcurial and Bonhams in Paris, London and New York, Jef Aerosol is a legend of French street art who regularly participates to international street art festivals and has been invited to multiple solo exhibitions in museums in France, Germany, Argentina, Brazil and Morocco.

>french art studio has been created by Caroline and Jerome Le Luel in 2006. Passionate about contemporary art, their aim is to present and promote the French contemporary art scene outside its borders and therefore meet art amateurs as well as keen contemporary collectors from all over the world. Numerous events and exhibitions are regularly held in a beautiful space situated in the heart of Kensington. The gallery also participates to many art fairs all around the world. French art studio presents a wide selection of paintings, sculptures and photographs. In a friendly and relaxed atmosphere, art amateurs can discover and enjoy beautiful pieces of art by well-established artists as well as young emerging talents.

Other events from >french art studio