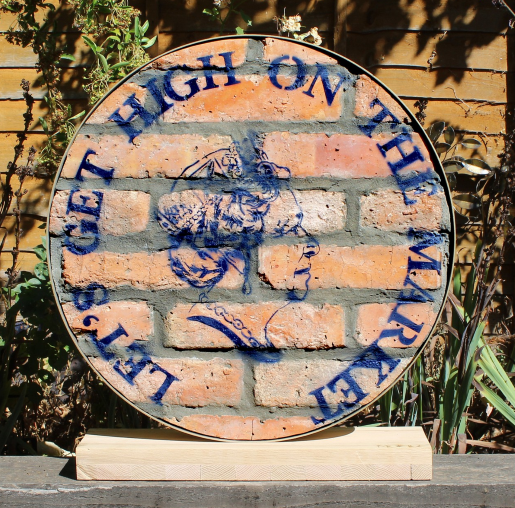 On 1st September we are opening a new exhibition by Jofre Hall! His brand new project MOCO ROCKETGIRL will explore the current situation of housing, affordability and property market in London. Creating artworks on the streets, using bricks and sculptures of houses, MOCO raises awareness of the increasing property prices.

Jofre Hall is an artist and humanist born in Barcelona and living in London since 2011 who dislikes globalization, climate change, ostentation, contempt, inequality and many more disqualifying adjectives. He is an artist who vindicates the facts and intends to represent in the simplest and most graphic way, the synthesis between two elements that by themselves are contrary but if put together add greater meaning.

His works are always visually simple but impressive, using plain colors and playfulness. Often minimalist but granting room for interpretation so that in return the observer formulates diverse opinions and achieves enrichment. He does not have a specific technique. If the result of his new idea is to be represented in metal, then he will learn to cut and weld. Or it can be wood, plastic, glass, fabric, marble..., the materials will always follow the idea.

We invite you to the private view/opening night of the one and only MOCO opening on 1st September 2022 at 6 PM at Stour Galleries in Haggerston, 258 Kingsland Road!

Spanish-born multi-disciplinary artist Jofre Hall has been living in London for over a decade. Self-taught and self-styled, his latest exhibition is a multimedia response to the
ongoing housing crisis in his adopted city and indeed, the world at large. His latest work asks the timely question that although it’s often said that great artists have no country,
should it also be the case that they have no home? Jofre Hall lives and creates his work in an otherwise nondescript semi-detached rented house in resolutely unfashionable Tottenham. Whilst a significant percentage of art is content to hang unobtrusively on the wall, nearly all of Jofre’s work looms at you, as if contemptuous of the passive observer. A giant, exposed egg yolk set defiantly against a sea of blue. A hail of all too real arrows puncturing a sheer yellow canvas. A metal shutter cropped at a vicious angle like the blade of a guillotine. A hex key expertly carved from
wood, standing as tall as a man.

The audacity of his work is also represented in the sheer breadth of thematic subjects tackled therein. In Jofre’s worldview, the bigger the issue, the more important it is to confront. His palette of consciously bright colours mirrors the urgency of the subject at hand, be it climate change, globalisation, war, gentrification, consumer culture and the many unfettered indulgences of late capitalism. And yet, Jofre’s work is defiantly personal rather than political – perhaps influenced by his roots in Catalonia. His common sense, pragmatic approach to any problem at hand is also reflected in his methodology. Indeed, Jofre is a self-taught painter, illustrator, carpenter, metalworker and sculptor – for no other reason than the work seemed to demand that he adopt these disciplines.
The sudden resurgence of boardgames during the first lockdown of the pandemic provided the latest spark of inspiration in the form of the little green houses found in the game of Monopoly. Jofre wanted his next project to incorporate his disdain for the self-perpetuating housing crisis exacerbated by constantly escalating property values. The scope of the project was so large that it required a reinvention of sorts and after a period of workshopping, the multifaceted MOCO brand was born. Working with a laser engraver for the first time, Jofre began to create affordable housing in the comfort of his own bedroom – initially in the form of small wooden houses painted in MOCO green but soon morphing into disparate shapes such as long cascades of dominos, a tight beehive of terraced houses and ultimately into the form of a soaring rocket, simulating the trajectory of the housing market.

MOCO seemed too big to contain in any given location and quickly spread into the still empty streets of London via a nocturnal campaign of eye-catching dioramas and spray can stencil art, much to the enjoyment of local residents and the occasional chagrin of property owners. Bolstered by a multimedia campaign of street art, photos, videos and drone footage, Jofre’s exhibition at the Stour Gallery in Hackney represents the culmination of over a year of intensive work, as well as the most productive and ambitious period of his artistic life to date. Featuring over a dozen pieces of art, it is a showcase of thought-provoking ideas represented via several different mediums. The diversity of materials and techniques employed throughout embodies the restlessness of an artist fixated upon continuously learning and evolving.
Or as Jofre would have it, “each idea is a new challenge and every day a new class…”.

We invite you to the private view/opening night of the one and only MOCO opening on 1st September 2022 at 6 PM at Stour Galleries in Haggerston, 258 Kingsland Road!

Other events from Stour Galleries