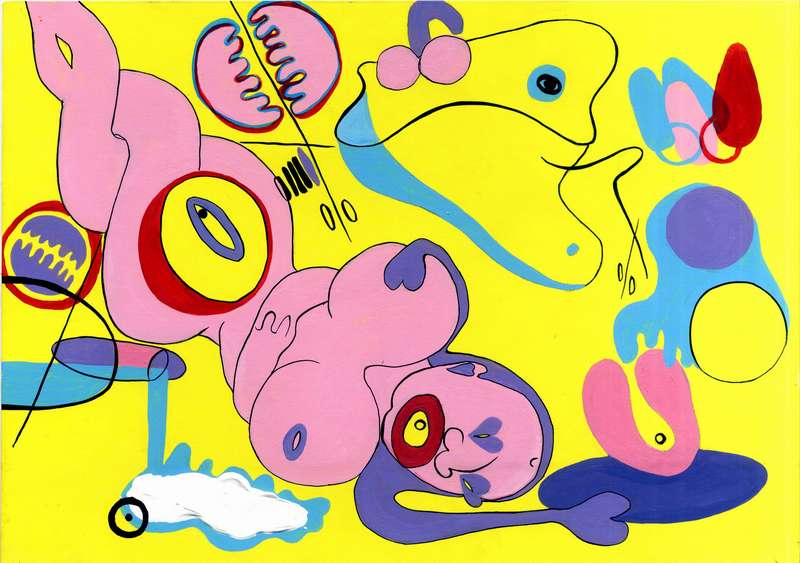 1. Tell us about your background. Was your family in the Arts ?

I am originally from Thailand but I came to London to study Fashion Illustration at the London College of Fashion. I came from an Asian background therefore, you can imagine, I had a strict upbringing! My father was a businessman and he was not really into the Arts. However, my mother was very interested in Fashion; she always loved dressing up and matching clothes and accessories. Initially, they wanted me to follow a more business-orientated pathway but I found myself being drawn to the process of creating Art. I was constantly showing them that I am eager to become a successful artist. Later on, when they realized I was dedicated, they started to show their support and began helping me chase my dream.

2. You feature a character called Lolla quite a few times in your artworks. Tell us more about her.

Lolla is an icon that I have almost always featured in recent artworks. She represents sexual contexts or sexual innuendos in advertising. I have created Lolla because I think this can reduce the criticism of sexual objectification in advertising.

Many modern advertisements tend to use young female models when it comes to representing sexuality, which has sparked much public debate regarding how appropriate it is and how, to a certain extent, this can insult women. I personally think, sex is a natural thing and that sexual context has had its presence in media for decades, so we cannot avoid media that represent sexuality.

By replacing young female models with Lolla, the content of the advertisement becomes cuter or more sexually positive as a graphic, as oppose to sexually violent. In addition, my Lolla project is about sensory perceptions of sexual images and represents sexual contexts rather than directly representing sexual texts. So, the audiences would not think my work is too violent and wild.

" my Lolla project is about sensory perceptions of sexual images and represents sexual contexts rather than directly representing sexual texts. So, the audiences would not think my work is too violent and wild. "

3. What initially made you so fascinated by the idea of hidden sexual context in advertisement ?

I have always been interested in decoding messages in many types of media from films to commercials, to Disney animations. I love surfing YouTube for hidden messages in advertising and cartoons; it’s certainly clever! And I find it interesting that there is more than meets the eye in a lot of films, art, advertising and everyday surroundings.

" I have always been interested in decoding messages in many types of media from films to commercials, to Disney animations. I love surfing YouTube for hidden messages in advertising and cartoons; it’s certainly clever! "

4. Do you see the use of sexual innuendos in fashion advertisement as a good or a bad thing? Would you say your views are reflected in your images ?

" For example, some food advertisements use sexual innuendos to sell their product. I think it is not compatible but it does make the advert look funny. "

5. How do you hope to see the Lolla Project developing in the future ?

I want to see my Lolla character in many forms, not just in painting. Right now, I am experimenting and trying to feature Lolla in 3D forms and make the Lolla project something more adaptable to a worldwide audience. I would like to incorporate my visions of Lolla in the real world and to build more of a following and become known as her creator.

6. Are there any other mediums you currently work with or wish to try in the future ?

I've always used acrylic paints and ink to paint on canvases, mount board or plaster. However, I became interested in performance too because I think performance comes from reality as it is all about how people express their true feelings. Similarly, I would like my Lolla icon to become something real as oppose to a fake, sexual looking doll. So, I would like to adopt ideas of performance into my Lolla project.

7. Describe your life as a student at the London College of Fashion ?

My life as a student at LCF was fun and certainly fluctuated; I've done so many things including party, spend time experiencing the underground party scene and making friends with people from other nationalities, giving me the chance to come face to face with new cultures. It really opened my eyes! The London College of Fashion gave me plenty of experiences such as nude drawing classes, which I would have never experienced in high school where I was focused on the study of science and mathematics. This was certainly something different.

I am always eager to improve my skills and create something new. In 5 years times, I hope to see myself become an internationally renown artist with my signature project, Lolla. However, I will not stop experimenting and stepping out of my comfort zone and will always try to create something new for my audience to see. So, currently, I plan to roam around and get a lot of ideas.