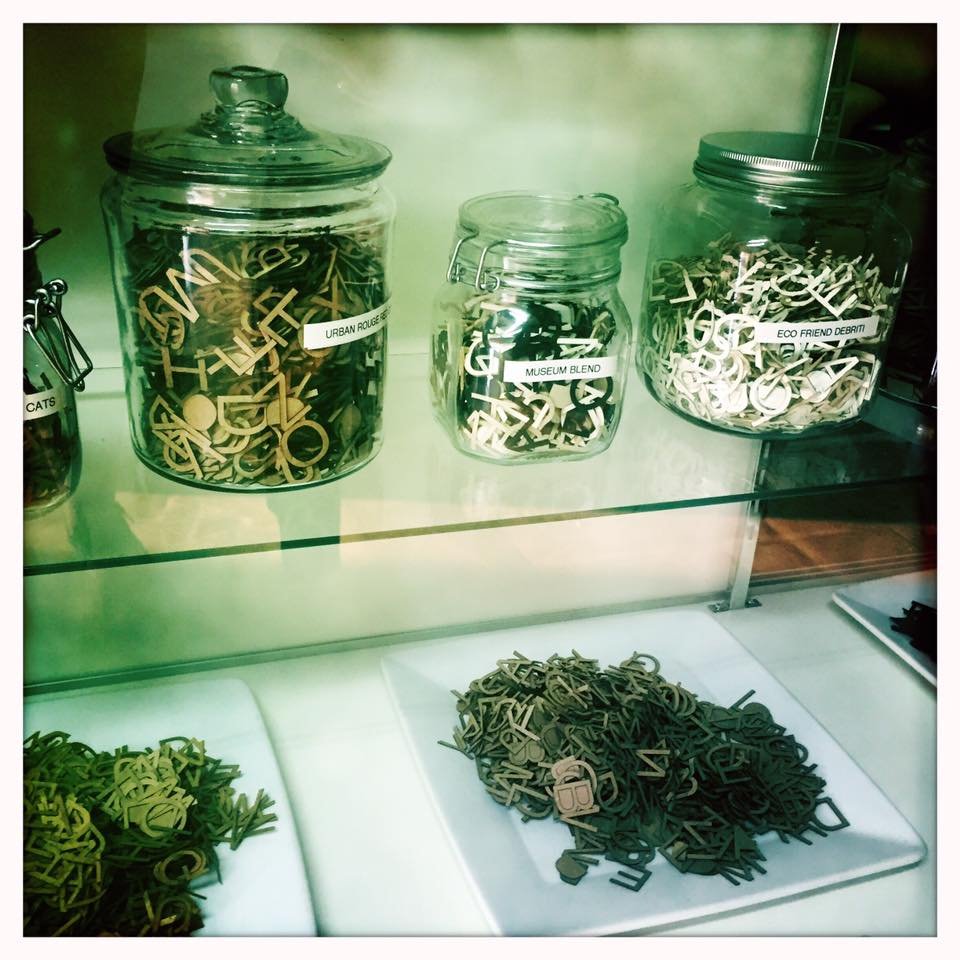 Los Angeles based artist JonMarc Edwards will be exhibiting " The Debriti Show", a traveling immersive installation that challenges visitors to " Choose Your Words Carefully". Modeled after a modern-day apothecary, "The Debriti Show" features a text dispensary where visitors can buy distintic blends of text poems in a jar and personal mantras. Both witty and profund " The Debriti Show" explores the transformational power of lenguage and tangible text.The installation is located in The Tool Room gallery at the Bells Arts factory. JonMarc will also be exhibiting a large-scale Debriti sculpture in The Museum of Ventura County pavillion. This exhibition is presented by Dulce Stein, a Los Angeles based curator and director of The Gallery Presents in Hawthorne, curatorat The Neutra Institute Gallery and Museum.

Jonmarc Edwards Born to a nomadic family of retail hustlers and small town shopkeepers, Jonmarc grew up making produce signs and wrapping gifs for his fatherís 5 & 10 stores. Jonmarc's art began to grow out of this mixture of ink and block printing and his careful attention to gift presentation. As his fatherís job evolved into managing stores, art became the only constant in Jonmarcís life as his education became a revolving door of public schools throughout the Midwest. Eventually Jonmarc would travel all over the U.S. and Japan gathering influences as diverse as calligraphy, punk art and short story writting. Since 1990, Jonmarc has lived in Los Angeles, finding fertile ground for these interests. He is best known for work that transforms composed writtings into concise, legible pictographic landscapes. His work has been individually exhibited in the United States and abroad at galleries that include Apex Art Gallery, NYC, Coagula Curatorial, Newspace Gallery and Carl Berg Gallery in Los Angeles, Art Affairs, Amsterdam, Netherlands and the Deborah Colton Gallery in Houston, Texas. Edwards has received numerous grants, awards and commissions including the Louis Comfort Tiffany Foundation in New York City, the Bush Foundation Artists Fellowship in Minneapolis, MN, the Jerome Foundation in St. Paul, MN and the NeimanMarcus Memorial Commission in Dallas, Texas. Edwards diverse interests have led him to create a line of jewelry, costumes and set pieces for the performances of Looming Bias, performed at Art Center, Pasadena and a billboard series My Work Is Here, located at major intersections of Los Angeles. Jonmarc has recently finished The Truth Collection, an edition of fifty-leaded crystal sculptures completed in September 2013. The Truth Collection, under the direction of Mark Litwin M.D., MPH. Professor and Chair of the Department of Urology, David Geffen School of Medicine at UCLA, is awarded to graduating residents that exhibit a gift for the sensitive and nurturing practice of patients rights advocacy.

Dulce Stein is an up coming Los Angeles based curator. Born into a family of artists, Dulce found her passion in Curatorial practices. Director of The Gallery Presents in Hawthorne and head curator at The Neutra Institute Museum gallery, Dulce Stein has curated over 500 artists in the last year an a half and looking foward to next year.

The Museum of Ventura County first opened in 1913 in the newly built Ventura County Courthouse (now Ventura City Hall). Soon known as the Pioneer Museum, its collections of artifacts and curios were the legacy of Dr. Cephas Bard, a Pennsylvania doctor who came to Ventura after the Civil War. A compassionate man with wide-ranging interests, Dr. Bard accepted historical objects in lieu of cash payment for his services. Priceless Chumash, Spanish and Mexican-American objects from his collection are on display in the galleries today.

In 1977, the Museum moved to its 15,000 square foot building on Ventura’s Main Street, near historic Mission San Buenaventura. In 1978, it became an independent nonprofit, no longer receiving operating support from the County of Ventura.

Other events from Dulce Stein