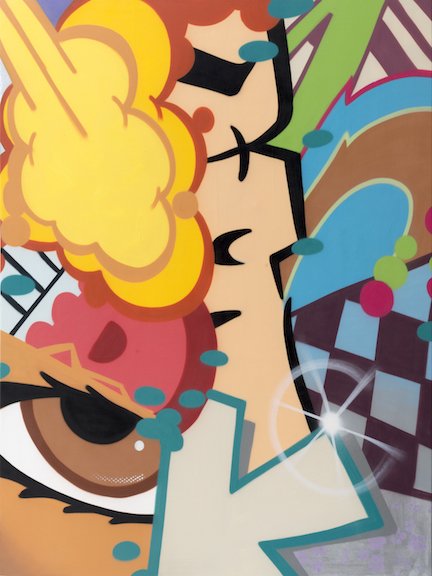 You know it when you see it, graffiti we mean. It's edgy. It's powerful. It speaks to the streets. It speaks to the people of the streets with statements of Revolution and Evolution, where Impermanence becomes Freeing. See its public outrage morph into private solidarity; works that tease with bold abstraction and sophisticated amusement. You’ll be biting to become part of this artistic crew.

CRASH (b. John Matos, 1961, Bronx, New York) took an interest in unconventional artistic expression at an early age.  At just 13 years old, he began following the older teens from his neighborhood to the train yards and began bombing.  Designated as “CRASH” after he accidentally crashed the computer in his school, his name started appearing on trains circulating all throughout New York City.  By 1980, the display of his work transitioned from train yard backdrops to canvases on gallery walls. CRASH transformed the graffiti movement by curating the groundbreaking "Graffiti Art Success for America" at Fashion MODA. CRASH’s career took off and he saw instant international popularity.  His work has been part of numerous museum and gallery exhibitions around the world, including shows such as “Graffiti” at the Brooklyn Museum of Art and “Art in the Streets” at the Museum of Contemporary Art, Los Angeles.

Regarded as a pioneer of graffiti art, CRASH’s work combines elements of both traditional fine art and underground urban art creating a dialogue concerning the very nature of art itself. With apparent Pop-Art influences showcased amongst a subcultural street art foundation, CRASH allows viewers to explore the impartial quality that art has to offer, reminding us that great art can be found everywhere, whether it be on the side of a train, encompassing the surface of a building, or displayed on the walls of an art gallery.