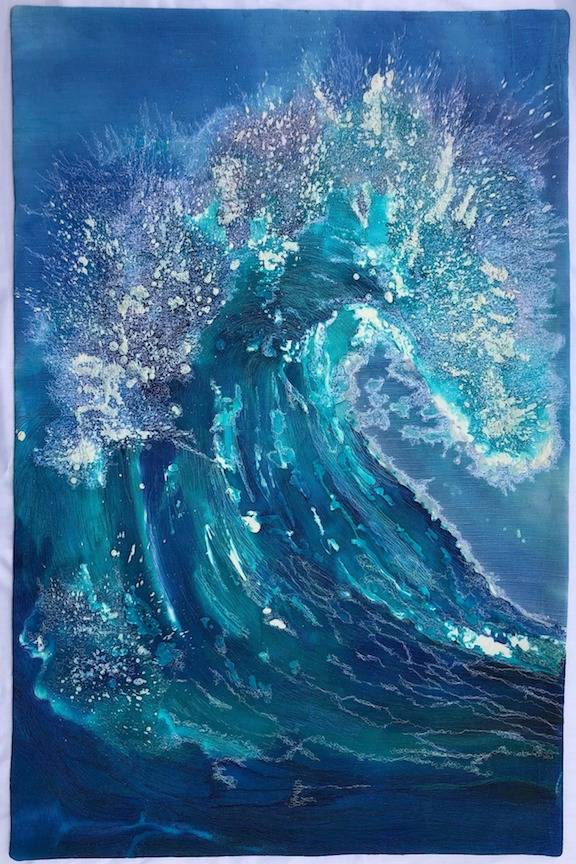 Czech Center New York presents Czech Contemporary Quilt, a cross-sectional exhibition, which charts the development of Czech artists working in this textile discipline, which was practically unknown in the Czech Republic just 20 years ago. Works by thirteen best women quilt artists will be on view June 30th – September 2nd, 2022. Following a number of exhibitions in Europe, this exhibition marks the first time that the best Czech artists will be presented to American audiences.

Despite being present on the world stage for less than 20 years, contemporary Czech quilting has become increasingly recognized in Europe and beyond. From the perspective of the American and Western-European quilting public, the start of Czech quilting in the early 2000s -- without any traditions; without an established system of clubs, associations, regular meetings, and exhibitions; and without museums and galleries as a backdrop – may seem baffling, however, Czech women artists had everything they needed: sewing machines, plenty of fabrics, and a high level of skill, and they were used to designing and improvising themselves. It was enough for them to take a few basic courses, learn from the experiences of those who had encountered patchwork before when they were abroad, read the first available magazines and books, and learn from their first interactions with neighbors across open borders.

The first Czech quilts were purely classic in nature complete with patchwork tops, but very soon some of the more creative artists switched to modern quilts. Massively organized courses across the Czech Republic brought up both new makers and trainers in a matter of a few years. Czech women began traveling to foreign exhibitions and gradually discovered a whole range of quilts from traditional to more modern styles. In 2007, Prague hosted its 1st Annual Prague Patchwork Meeting (PPM), an international exhibition that definitively connected Czech female quiltmakers with the outside world and, for the first, time showed foreign visitors Czech works. Bilateral inspiration, the increasing number of quilts on display, and thousands of visitors helped catapult the PPM and Czech quilting to the top European level in less than 10 years after the actual start of quilting in the country.

And the next chapter was written by modern Czech quilting. Europe began to appreciate new female quilt artists from the Czech Republic, the most prominent of whom received their first invitations for solo presentations at prestigious events, as well as cross-sectional collections for the whole Czech Republic. The motivation to create, experiment with new materials, and design original works was supported by the PPM exhibition and its associated circle of Art Quilt Club members who held beginner's courses in special techniques and incorporated foreign innovations.

The success of Czech quilting is due to the strong, individual stories of women artists. Without their constant work on new projects and their willingness to exhibit their works and further pass on their knowledge, the Czech quilt would not be represented in so many international collections and in private and museum collections, including in the US. Czechs are also represented in the prestigious SAQA organization.

Presented in collaboration with Brno Quilt Show and supported by SAQA.

Jana Štěrbová is the artistic director of the international textile exhibition PPM QUILT SHOW BRNO. Her own modern wall quilts are known not only in the Czech Republic but also abroad. In addition to teaching and curatorial activities, she also participates in publishing the PPM Brno online Magazine. She is a member of SAQA, AQH, Patchwork Gilde Deutschland.

The international textile exhibition PPM QUILT SHOW BRNO is the largest show of combined textile techniques not only in the Czech Republic, but also in Central and Eastern Europe. Until 2019, it took place in Prague and after a long pause, it continues from 2022 at the Brno Exhibition Center. Leading authors of the artistic wall quilt regularly take part in the exhibition. Thanks to the high number of exhibits and attendance of 5,000 people, the exhibition ranks 4th in Europe, and its level is rising year by year. More at https://www.bvv.cz/ppmbrno/.

THE CZECH CENTER’S mission is to actively promote the Czech Republic by showcasing Czech culture, innovations and creativity in the US. Its program covers visual and performing arts, film, literature, music, architecture, design and fashion, science and social innovations. As well as hosting its own events, the Czech Center offers support for other groups organizing interculture initiatives among Czech and US partners.

The Czech Center also seeks to further enhance cultural relationships between the US and the Czech Republic through curatorial visits, media tours and artistic residencies; helping to generate creative dialogue among artists, scholars, scientists and cultural activists from both countries. The Center promotes instruction of Czech language and provides series of Czech language courses.

The Czech Center, a contributory organization of the Czech Ministry of Foreign Affairs, opened in New York in 1996. The Czech Center is part of a worldwide network of 26 branches across three continents including the Czech Houses in Moscow, Jerusalem and Bratislava. The Czech Center was a founding member of the EUNIC. www.czechcenter.com