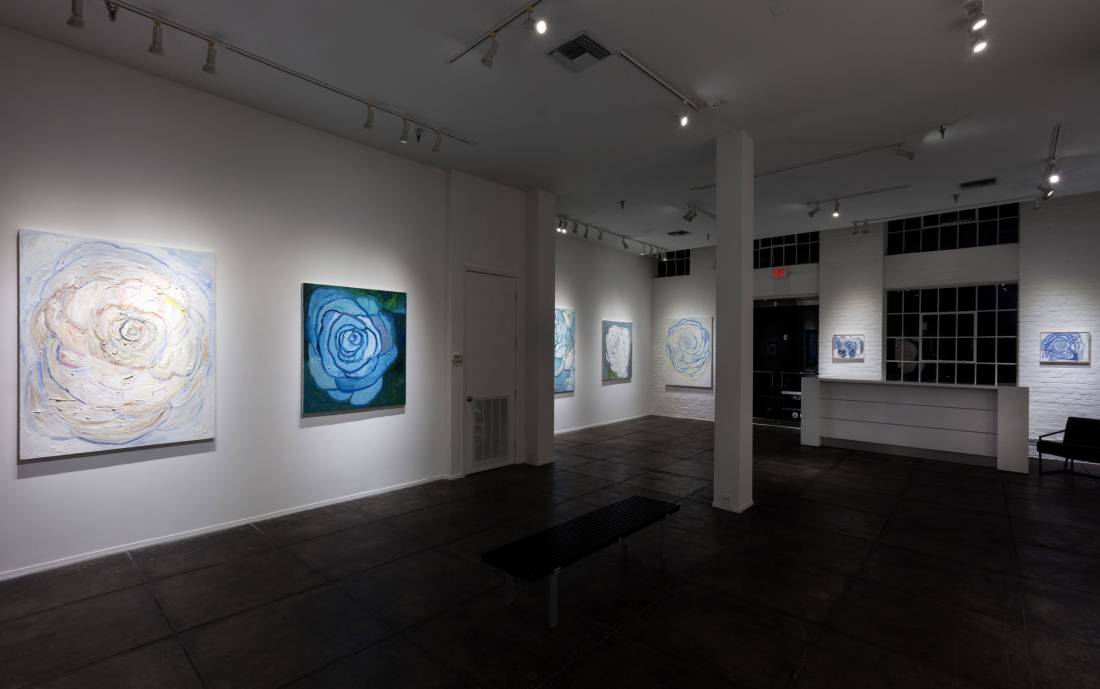 16 February 2022 (New Orleans, LA) JONATHAN FERRARA GALLERY is pleased to announce the fourth solo exhibition of New York-based and Louisiana-native artist MARGARET EVANGELINE entitled Camellias from a Temperate Zone. In this collection of eighteen new and recent paintings, Evangeline explores themes of patience and vulnerability with her striking and sophisticated floral imagery. Evangeline’s ongoing study of the camellia flower paired with her signature mark-making in oil impasto brilliantly emerge from the canvas to symbolize strength and perseverance in these delicate blooms.

The artist says of the exhibition:

The Camellia’s image even when it is blue reminds me of a wound that’s healing itself. That was my original attraction to it. It fascinates me that the process of painting is a healing one yet paint leaves a wound, a mark and is a mystery.

I read the Harper Lee novel, “To Kill a Mockingbird”, during the summer of its release. In it, a white camellia comes to express the uncertainties of understanding and patience. In it, Harper Lee attempts to remind us that racism can’t be transformed superficially through violence. An older white woman says to her young white gardener, if you want to kill a camellia you have “to pull it up by its roots”. She wants to strike a chord that takes us back to a camellia as a reminder that only patience and understanding can transform cruel bigotries. I see this flower as emblematic of the American South. It takes my own image-making to a new level that tells again a story of strength in vulnerability.

The exhibition will be on view from 16 February to 19 March 2022, with an opening reception coinciding with the Arts District of New Orleans’ (ADNO) First Saturday Gallery Openings from 5-8 PM on 5 March.

MARGARET EVANGELINE received her MFA from the University of New Orleans (UNO) in 1978, where she was the first woman to graduate from the program. Margaret studied with Calvin Harlan who introduced her to Robert Bly, a visiting artist to UNO. Bly’s translations of Kabir, the 15th century mystic poet, have influenced Margaret throughout her career. Throughout the 1960s and early ’70s, Margaret re-located numerous times with her three young children and Air Force pilot husband before moving to New Orleans. After receiving her MFA she established her painting practice in New Orleans, exhibiting at Gallery Simone Stern and then Jonathan Ferrara Gallery. She developed the Fine Arts Department and Gallery Program at Delgado Community College, where she continued to teach painting and life drawing courses until moving permanently to New York City in 1992.  Evangeline established her studio practice in Chelsea on the Hudson River in 1995 where she worked until 2015.

In New York City Margaret was represented by Stux Gallery (later Stux + Haller) until their closing in 2016. She currently exhibits with Kim Foster Gallery. Important exhibitions in New York included her videos as well as paintings, especially on the effects of Hurricane Katrina on family and friends. Her first monograph, Margaret Evangeline, was published by Charta in 2011. The project book Sabachthani (2012) documented a venture done in collaboration with servicemen in Iraq. This book led to the exhibition Sabachthani at The Eli and Edythe Broad Museum at Michigan State.  The installation was subsequently purchased by the museum. Some important group exhibitions throughout this period include: The Drawing Center, ACA Galleries, Taipei Fine Art Museum, Delaware Center for the Contemporary Arts, Art in General, and White Box Gallery. Some important solo exhibitions throughout Margaret’s career include: Shaw Center for the Arts, Louisiana State University, Palm Beach ICA, The Rose Art Museum of Brandeis University, The Ogden Museum of Southern Art, Paul and Lulu Hilliard University Museum, and Olin Gallery of Roanoke College. Important site-specific permanent installations include: The Fields Sculpture Park, Omi International Arts Center, and Michigan State University.

Margaret Evangeline was commissioned to make a site-specific painting in 2018 for Neevelgarde Building, Nieuwegein, Netherlands, and for 50 West a new residential building in Manhattan. Other commissions include a sculpture installed in London on the River Thames across from the Tate Modern. Her work is included in private and public collections in Australia, Canada, China, France, Ireland, Saudi Arabia, The Netherlands, and the UK.  She has participated in Art Fairs in the U.S. and Europe.