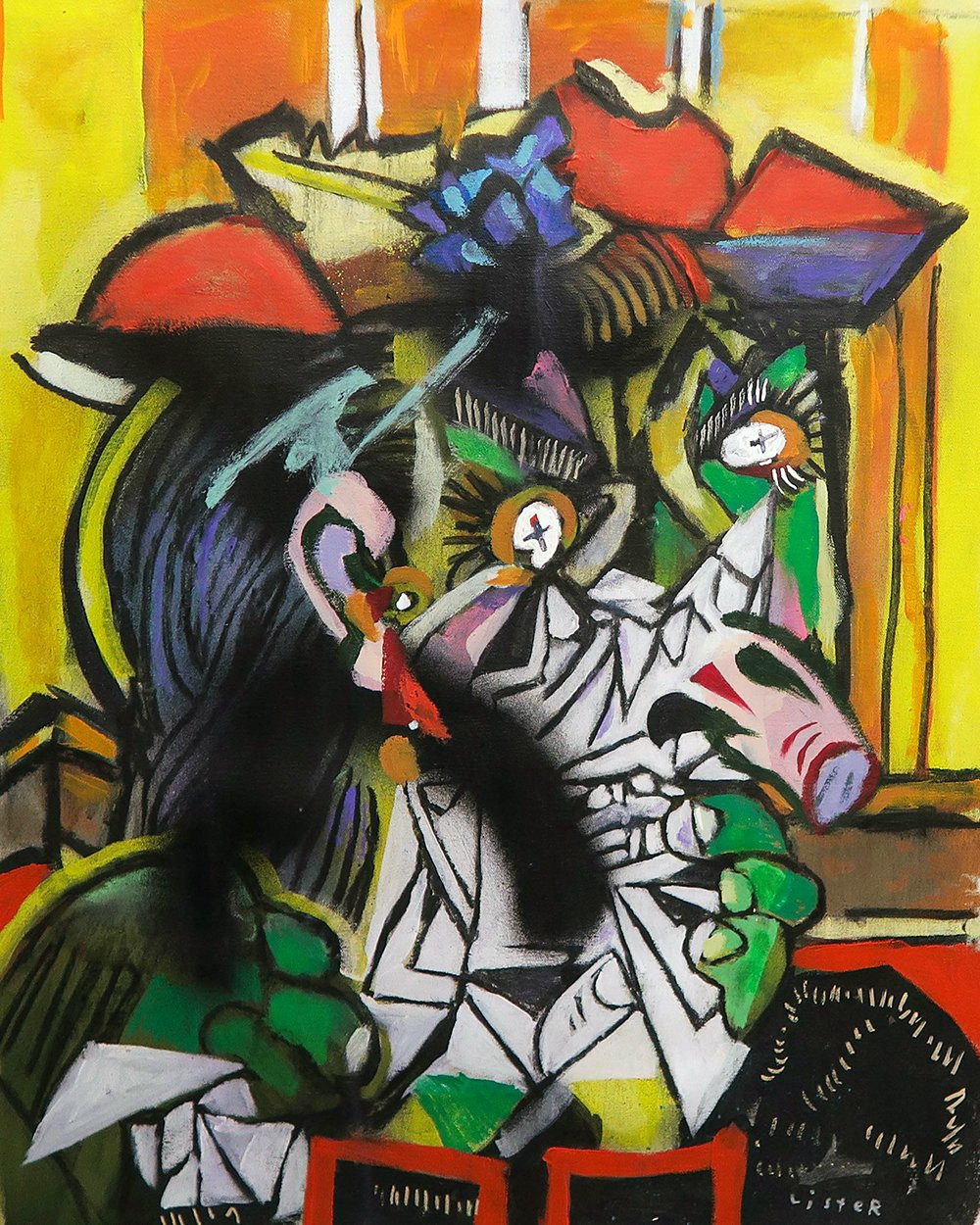 About the Exhibition: "Modern Masters"

Artist Statement:
I make artworks about interesting things I like to talk about. I also make artworks about serious social issues I feel need to be talked about. Need for discussion. Art history is fascinating. It is important for me to openly pay my respects to just a few of the masters of whom I admire and have drawn reference to in my own work for years. There were moments while painting for this show where I felt real joy and clarity, in many ways I felt closer to the divine light that has guided painters for millenniums. This exhibition is loaded with literal conversations between myself and the master painter of who’s artwork I am referencing. In the making of these paintings I found it it necessary to recreate the original in every way possible­ -Including: size dimensions, colour pallets, titles and of course subject matter. Only once the work resembled the actual original did I feel comfortable to respectfully respond that my contribution is in someway an accurate representation of a truly impossible collaboration given that every other artist in the show besides myself are dead. Question: how does one improve on perfection? I chose these works from these painters that I admire because I love these works. I don’t think for a second that by me adding anything onto them in anyway could improve these masterpieces from their true forms; to think this would be both arrogantly foolish and ridiculously vain. Having said that and to be completely honest, as a painter I found myself struggling with this regularly. There was only one way that I could make these works; I needed to imagine as if I was actually collaborating with these painters. I had to imagine that they each gave me permission to finish the artworks each had “started“ many years ago.

Artist Bio:
With literally hundreds of successful exhibitions to date, Anthony Lister is a serious and professional artist. His work focuses on social issues like: freedom, morality and power in a rich and unique tapestry of ambiguity.
His exhibitions have been presented in Museums such as; The Nation Gallery of Australia, Institute of Modern Art, Berlin’s ­ Urban Nation Museum and a number of Academic Institutions worldwide. His artworks have been featured and seen in several Hollywood films. He himself was the subject of a feature length film on his life directed by acclaimed documentarian Eddie Martin titled: ‘Have You Seen The Listers?’ which is seen Internationally on Netflix. Lister has also collaborated with many painters, writers, poets and musicians including Singer Song­writer Nick Cave.
Anthony Lister is a graduate of the Queensland College of Art and student of New Zealand born, New York based painter Max Gimblett. He pioneered the Street Art movement in Australia before moving to New York early in his career. Whilst participating in the ‘Spring Street Exhibition’ the Wooster Street Collective curators Marc and Sara Schiller which saw his work published on the cover of the New York Times Art section. Not long after, Lister began to work with several businesses and magazines which elevated his profile as a painter to watch.
Anthony Lister has given numerous talks at Universities and seminars, speaking on the fundamentals regarding social concerns and the theoretical definitions behind his ‘Contemporary Mythology’ artworks. His ongoing relationship with curator Roger Gastman, who is highly regarded within contemporary Art, whom recently curated: ‘Beyond The Streets’, and co-­curated: ‘Art in the Streets’(LACMA) with Jeffrey Deitch and Aaron Rose. In collaboration Roger and Anthony have held several successful exhibitions as well as created the 356 page Ginko Press publication ; LISTER ­ Adventure painter. Anthony continues to keep busy, painting in his studios around the world and is currently working towards his sixth major survey publication about his work.v