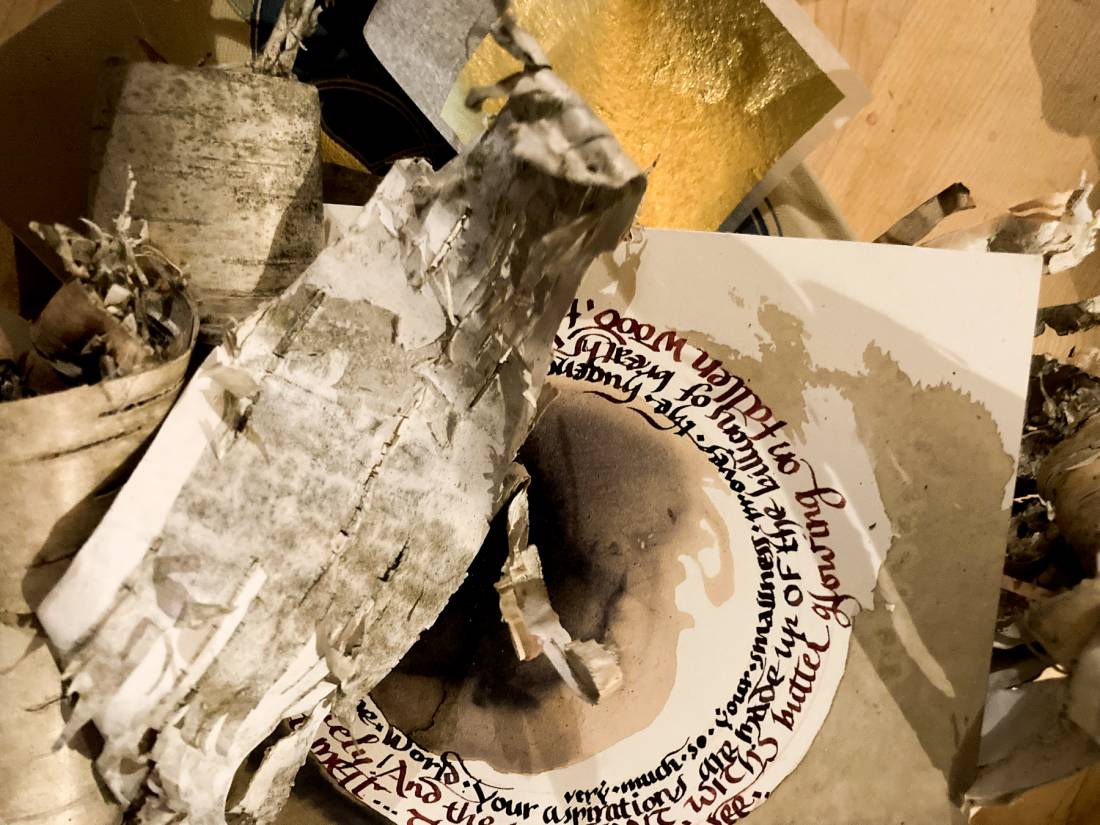 Recalling the Chimæra is a collaborative three-person exhibition featuring work by artist Candace Jensen, artist and poet Coleman Stevenson and ink-maker and artist Thomas Little. The show features animist text and image investigations, illuminated sigils and calligraphic symbols, cross-species collaborative artifacts, and ætherial visual geometries. The exhibition itself is the Chimæra, and the makings of a ritual to rewild language, to come back into conversation with the nonhuman, the inhuman, the magic and the impossible through figurations of speech and symbol.
​

Join artists Candace Jensen, Thomas Little & Coleman Stevenson to celebrate the opening of Recalling the Chimæra. Light Refreshments to be served, free and open to the public!

Candace Jensen (she/her) is a polymath artist, radical idealist and woods witch living on the unceded lands of the Elnu Abenaki and Pennacook people (Southern Vermont). Jensen earned an MFA from the Pennsylvania Academy of the Fine Arts, and a BFA from Tyler School of Art, both in Philadelphia (traditional lands of the Lenni-Lenape). She has exhibited her work in New York, San Francisco, Philadelphia, Brooklyn, Vermont and Antwerp, Belgium, and is currently represented by Amos Eno Gallery in Brooklyn, NY. Her visual art and writing have appeared in Iterant, ANTE Mag, Studio Visit Magazine, the Komask biannual catalog, and is forthcoming in both ē·rā/tiō modern poetry as well as Cambridge Writers’ Workshop’s Disobedient Futures. Jensen serves as the Book Arts & Letterpress Director at the Ruth Stone House, Art Editor of Iterant Magazine, faculty at Fleisher Art Memorial, and is Cofounder and Programming Director of In Situ Polyculture Commons, an arts residency and regenerative culture catalyst.

Thomas is an ink and pigment maker who explores mystic and scientific concepts through the lens of ink and our relationship to mark making. He gathers threads from alchemical imagery, chemical phenomena, mystic observations and incorporates them into a holistic synthesis theory of art-science-magic. The natural world informs his work with ink in not only the materials used, but the relationships expressed between organism and element. He makes the pigments he uses and sells from firearms he takes out of circulation and dissolves in acid. He works with slime mold (Physarum polycephalum) to produce cross species collaborative artifacts. He has contributed pigments to university material libraries, including the University of Massachusetts and the University of Pennsylvania. He has curated exhibits on pigment histories and taught numerous workshops in museums, art studios and botanicas.

Coleman Stevenson is the author of three collections of poems, Light Sleeper (2020), Breakfast (2015), and The Accidental Rarefication #5609 (2012), several books about the Tarot including The Dark Exact Tarot Guide, and a book of essays on creativity accompanying the card game Metaphysik. Her writing has appeared in a variety of publications such as Seattle Review, Mid-American Review, Louisiana Literature, tarot.com, and the anthology Motionless from the Iron Bridge. In addition to her work as a designer of tarot and oracle decks through her company The Dark Exact. Her Fine Art ork, exhibited in galleries around the Pacific Northwest, focuses on the intersections between image and text. She has been a guest curator for various gallery spaces in the Portland, Oregon, area, and has taught poetry, tarot, design theory and cultural studies at a number of different institutions there, most currently for the Literary Arts Delve series, which includes seminars at the Portland Art Museum.

Other events from Amos Eno Gallery