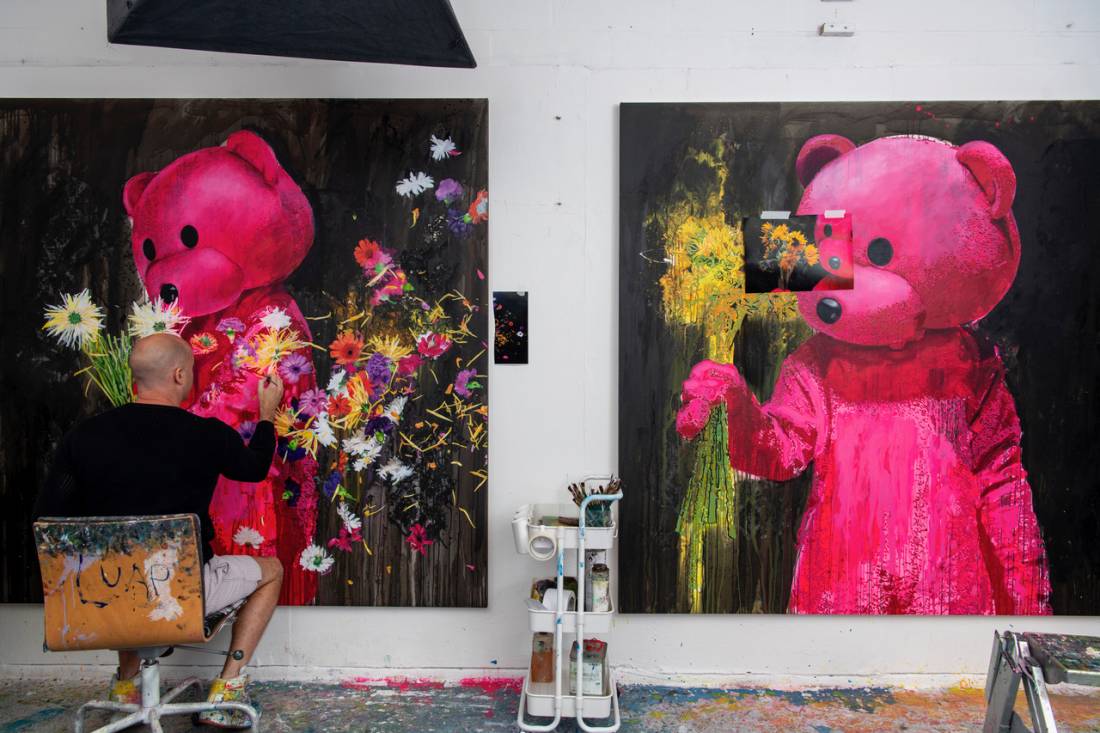 The Pink Bear is a signature of LUAP’s work. It has appeared in street art murals in London, on a billboard in Times Square, on the front cover of an Italian fashion magazine, in photographs, prints, live performances, and even as a series of soft-toy collectibles.

And this Autumn, the year of the artist’s 40th birthday, the Bear, and the man inside, will be making their most complex and physically-demanding trip yet.

This September, the artist LUAP is traveling to Mongolia to ride on horseback through one of the world’s most remote landscapes.

Why The Bear? How Did It Evolve Into The Protagonist of LUAP’s Multimedia Practice?

In 2015, the British artist Paul Robinson (better known by his moniker LUAP) climbed the four highest peaks of the Atlas mountains for the National Autistic Society charity, the first of the challenges that the artist set himself while overcoming a period of darkness. Venturing out of his comfort zone went from an unconscious therapy to a conscious one - and one which would dictate the direction his career from that point forward and unlock his artistic potential.

During an earlier period of Cognitive Behavioural Therapy, the artist had turned to a long-forgotten childhood memory for comfort: a family photograph of LUAP with his parents, brother, and a large pink bear. The photograph now hangs in Robinson’s home while The Pink Bear has evolved into the protagonist of LUAPs multimedia practice. The Pink Bear symbolises both the artist’s childhood hopes and his adult dilemmas.

A key focus of LUAP’s practise is the impact on the planet of Western attitudes to consumption. That’s why, this year, the artist is collaborating with Le Good Society in a stand against plastic pollution. The decision to ride on horseback was made because the journey will have no carbon footprint other than the feeding of the horses. With the changing employment ecosystem worldwide, the hunters of the Golden Eagles may soon be relegated to legend, and the traditional way of living in Mongolia may vanish too.

LUAP residency at The Exhibitionist Hotel

The current exhibition of the meticulously hand-painted canvases depicts LUAP’s journey around the world, filled with his ionic bear in forests next to fires and high up on the glacier, he continues to challenge our understanding of mental health. Some of the paintings are larger than 2 meters in width. The exhibition is titled ‘What A Wonderful World’, based on the song made famous by Louis Armstrong, is exhibited throughout the hotel, and artworks are for sale, until the 6th of October.

For the 5th Edition of Kensington and Chelsea Art Week (KCAW), LUAP revealed an immersive installation on the first-floor Art Corridor of the hotel - a first for the artist. It is an experience – completely free and open to the public 24/7, and tours will be conducted during the event.

The Hotel's curator, Vestalia Chilton, has been working with artists to use the hotel’s walls as a blank canvas since 2015. There are four art corridors that are changed every year by wild creative interventions. As a result, the Exhibitionist Hotel is a constantly evolving artwork.

Other events from AFTER NYNE CONSULTING