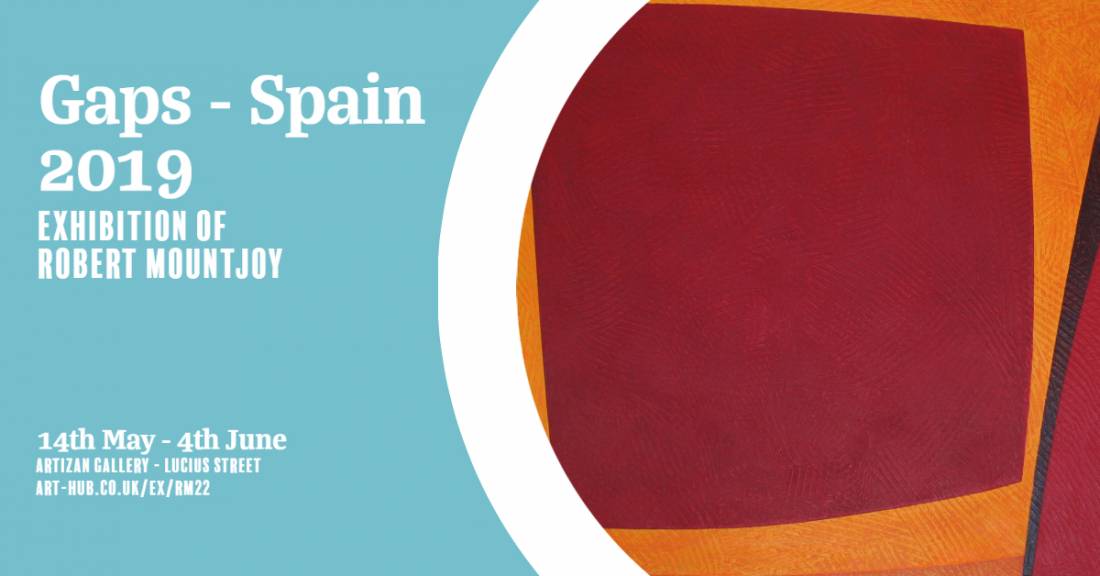 Artizan Gallery welcomes South West Academician, Robert Mountjoy to show a body of work completed following a trip he made to Spain in 2019,  as they enter their Summer season of exhibitions.

In September 2019, Robert Mountjoy took an unscheduled trip to Spain, visiting Andalucía and its historic sites. He took a sketchbook and a camera and came back full of new ideas, minimalist forms and textures, but most of all colours— reds – both intense and bleached out, with deep yellows and dusty grey/blues.

He spent some weeks playing with figurative landscapes based on the drawings, but felt he was not producing anything new or exciting. Looking back through his photographs, he found a batch where he had accidentally nudged camera settings to wide angle and continued to shoot before noticing the mistake. The resulting images showed views through narrow streets from one plaza to another with ‘barrel’ distortion… and these resonated with a series of abstract collage sketches he had been experimenting with.

The artist adapted and scaled up some of his collages; overlapping convex sided lozenges and painting them with the hot dry colours and textures recalled from the recent travels. Working on HDF or canvas boards, he built up layers of colour and texture over hard edged forms with contrasting gaps. The colours became more intense as the series continued and the stripped-down forms less architectural.

Having had individual works exhibited in several showcases over the past two years, the full collection now comes to Artizan Gallery in this new exhibition.

I was born in 1950 a month or two after Terry Frost painted “A walk along the Quay’ and I grew to regard the British Modernists as integral to my cultural heritage. As a young impressionable art student in the 1970s I was taught the basics: composition, colour theory and drawing for which I am thankful. I emerged as a teacher and an abstract painter in 1972.

A move back to my native Devon in 1985 resulted in a brief halt in painting. When I did begin to paint again, I painted landscapes. My abstract paintings had mostly been constructed through a response to landscape and I initially explained my new approach as ‘going back to the source’ but I liked the idea of moving from abstract painting to realism, counter to Panofsky’s model of artists’ development.

From expansive landscapes I began to explore corners of rural neglect and then still life paintings involving time worn utensils. I now choose to paint simple subjects set in beams of strong light. The highlights and shadows that were abstracted in my early paintings are now appreciated for what they are. These shadows, reflections and luminosity are now the main subjects.

For the most part the objects I paint now have no symbolic significance and are chosen for their colour and form. I try to render them truthfully, but make adjustments for the sake of composition. I want to avoid the sterility of excessive accuracy and brush stokes are not entirely blended out. I believe it is important to be able to read how the painting is made.

I work mainly on paper which has been stretched in the watercolour tradition and primed with gesso. Layers of thin acrylic overlay underpainting, and the composition is built up holistically. Finally, the detail is added by stippling with a size 0 brush. There may be final glaze to draw the surface together and sometimes a coating of varnish.

Other events from Artizan Gallery