Caput Mortuum - After the Fire 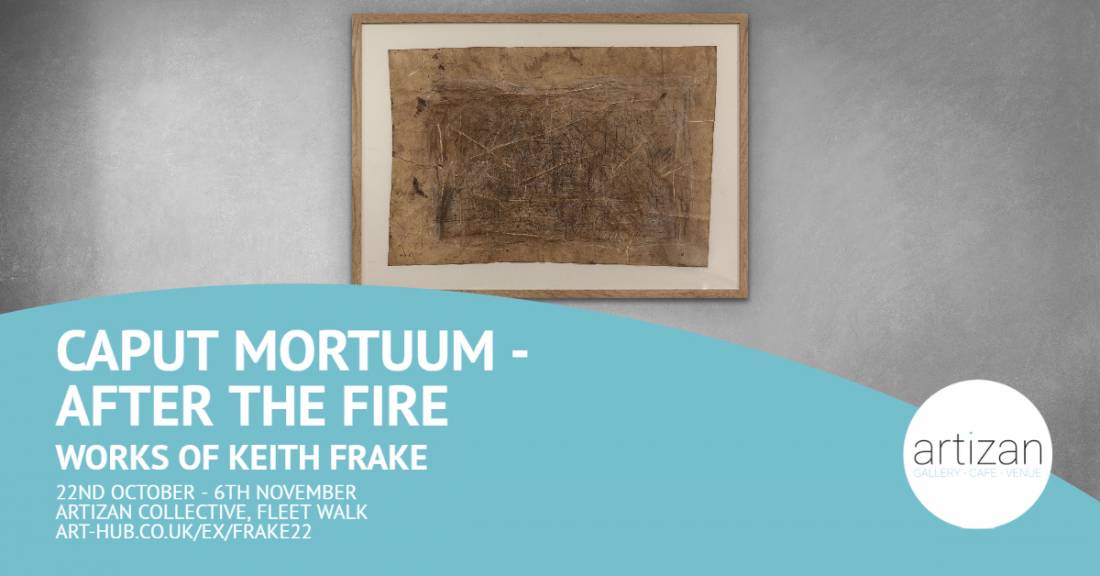 ​Keith Frake makes a welcome return to Artizan for a solo show introducing new works, this time to be hosted at the Artizan Collective gallery on Fleet Street.

The title of Keith’s exhibition, Caput Mortuum, refers to the main strands of influence that effect and inform his work. It is the Latin term and alchemical reference meaning both ‘Dead Head’ and Worthless Remains’ and it is the theme of ‘Worthless Remains’ and the alchemical process that this represents that has informed and is an important element of his latest work.

‘Fire is the main element that energises and transforms the materials I use. Fire has the capacity both to destroy and create, to calm and produce fear. It can be used to harden, strengthen, and make materials more fragile, fragile to the point where the material becomes lifeless and falls apart to become ash. I use the process of calcination, to introduce the element of unpredictability and instability into the work. I mainly use melting, boiling, scorching, burning, and drying, by directing flame onto the work either by blow torch or by putting objects into a bonfire, incinerator, or burner.

I also use caustic substances to burn and blister surfaces to produce colour variations. The materials I use are predominantly ash, clay, lead, various other metals, bitumen paint and beeswax.’

Keith studied Fine Art at Newcastle and the Royal College of Art in London during the 1970s, working primarily in film, video, and performance. During this time he exhibited work in galleries and festivals both nationally and internationally.  He then pursued a career as a teacher for over twenty years before returning to painting and drawing, developing images from a range of influences: the writings of Franz Kafka and Robert Walser, the poetry of Georg Trakl and the Book of Revelations. The films and writings of Andrei Tarkovsky have also been a strong influence.

Keith’s exhibition will make full use of the gallery space with several large-scale pieces and a combination of both 2 and 3D works and will run for two weeks.

I studied Fine Art at Newcastle and the Royal College of Art in London during the 1970s. My work was primarily film, video and performance related. I exhibited work in galleries and festivals both nationally and internationally.

I started teaching art and photography to children and eventually trained as a primary teacher. A career I continued for over twenty years.

As a teacher I continued to follow my interests in contemporary art some of which I introduced into the classroom.

My desire to start painting and drawing again and give form to my ideas evolved over a period of time. The images developed from a range of influences: the writings of Franz Kafka and Robert Walser, the poetry of Georg Trakl and the Book of Revelations. The films and writings of Andrei Tarkovsky were a strong influence. On a visit to the National Gallery of Scotland I discovered a small work by the expressionist painter Chaim Soutine, Le Mas Passe-Temps, Ceret 1920-21. I was particularly attracted by its swirling foray of thickly applied paint, darkness, distorted trees and buildings. Some of these ideas and motifs I introduced into my work.

My work over the last two years has tended to be dark in tone: using bitumen paint as a base surface into which I scratch and make abrasions. Much of my work is completed over long periods of time involving inscribing, peeling and sanding the surface, others are constructed relatively spontaneously and quickly. The same images appear and reappear in different forms and guises. Angels, trees, ladders, mountains and tiny stick figures that fall from the sky or hide underground. These images have become almost compulsive in their inclusion. Perhaps each piece of work reveals a small but unconscious part of a hidden narrative to which I am not privy.

I sometimes use watercolours or combinations of different medium. I also use a variety of materials including copper wire, lead and feathers.

Other events from Artizan Gallery