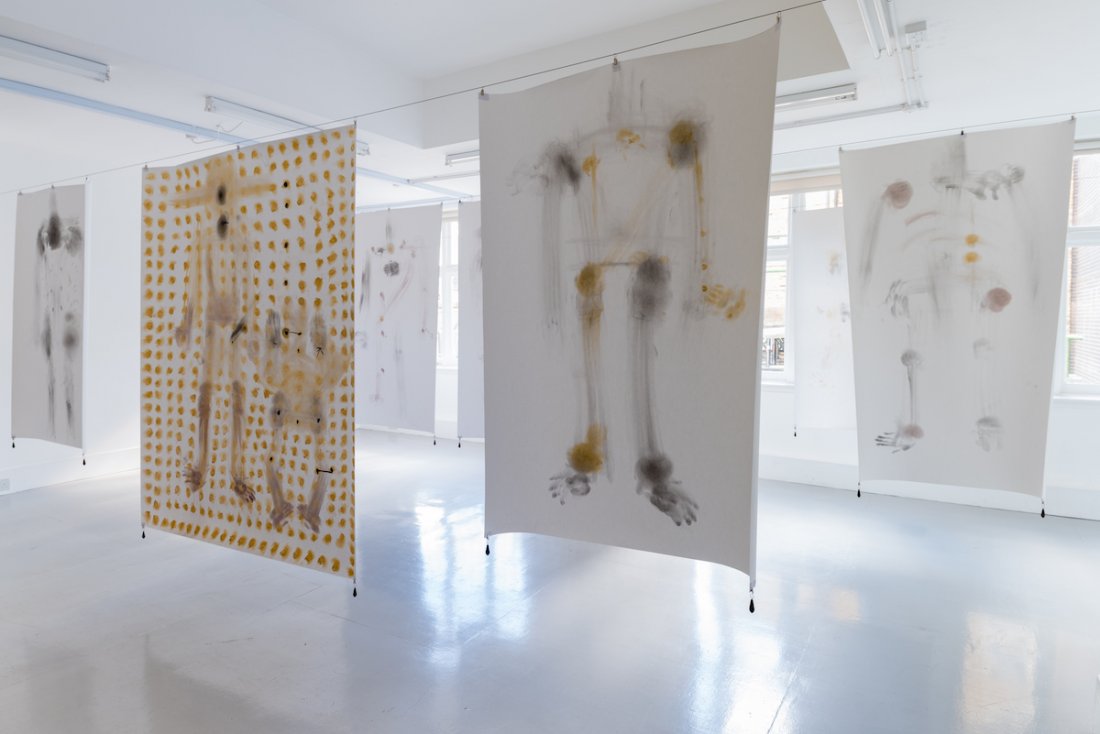 Reopening of Georgia Sagri's first UK institutional solo show, includes drawings, writings and performance on recovery and care, based on one-to-one treatments with members of the public.

Mimosa House​, an independent non-profit space in London dedicated to supporting the dialogue between intergenerational womxn and queer artists, ​will be reopening to the public on Princes Street in London on 2 September – 10 October ​for one last exhibition before it’s move to a new site in Holborn. The exhibition will be a continuation of ​IASI – the ongoing research practice of artist ​Georgia Sagri (b. 1979, Athens), which began this January and prematurely closed due to the COVID-19 pandemic.

From January to March this year, Sagri worked with individual participants ​via private and anonymous one-to-one sessions as part of her research into self-care and recovery – a ​10 year long body of research which includes voice tuning, breathing exercises and movement techniques. The upcoming exhibition in September will showcase the case studies developed over the three month period, taking shape in the form of performances, objects, drawings and writings by the artist. A screening of a performance by Sagri titled ​Breathing (5-1-5) ​which took place in Mimosa House in March 2020 will feature as well.

Sagri’s ongoing research was the basis for her iconic work ​Dynamis​, which featured at documenta 14 ​(Kassel and Athens, 2017) and involved sharing these techniques with ​200+ members of the public across the two cities. During this process, Sagri observed an improvement in the general wellbeing of participants, and continues to explore the stages of recovery in her work, IASI​.
The collaboration with Mimosa House is Georgia Sagri’s first institutional exhibition in the UK​, and is also the inauguration of her research practice ​IASI,​ and her long-term commitment to working directly with the public. This chapter of her research is being developed in ​overlapping phases across three international organisations​, each of which will host Sagri’s one-to-one sessions, research and respective case studies. The organisations are ​Mimosa House in the United Kingdom, ​TAVROS​ in Greece, and ​De Appel​ in the Netherlands.

Addressing the pathologies of our time, ​Georgia Sagri identifies her role in this process:
“... to support, listen and navigate with each participant the compass of their discomfort, and its causes and effects. The treatments are approached as a creative practice, in which we work together through voice, gesture and movement techniques. Each participant will find movements and behaviours that allow them to learn from their pain, become stronger and empowered, and facilitate the potential of further self-recovery”

On the project, ​curator and Mimosa House founder Daria Khan has said​:
“Georgia Sagri’s ‘IASI’ brings a unique and new opportunity to Mimosa House: to explore the impact of artistic practice on the public, as well as to ask wider questions about artist labour, self-care and pathologies of our time. ‘IASI’ is an experiment in establishing in-depth collaboration with individual members of the audience, through a process of sharing knowledge and bodily practice which have a long lasting effect beyond the exhibition’s timeframe and space.”

The exhibition will be open to the public from 2 September to 10 October at Mimosa House on Princes Street, London.