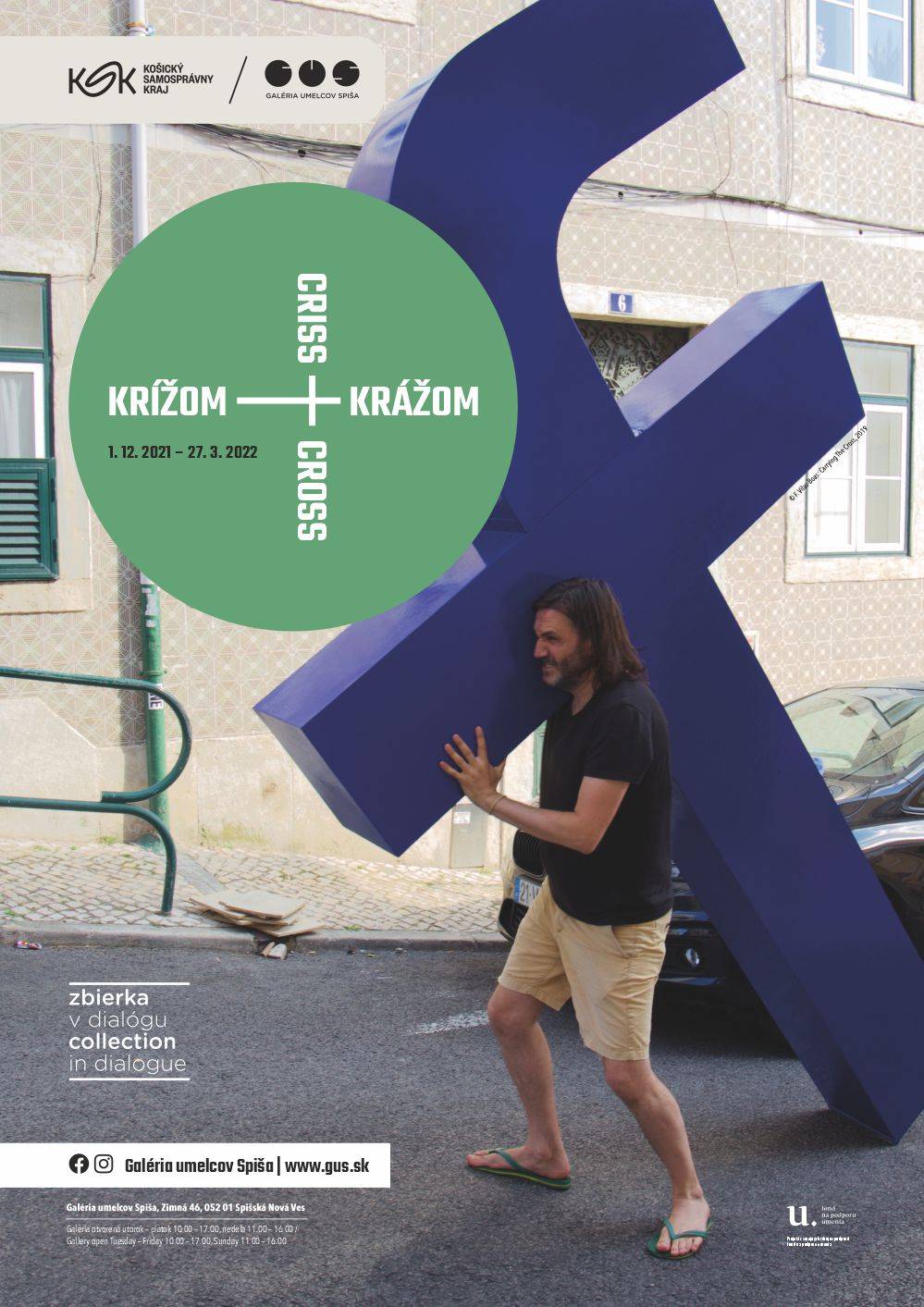 The exhibition Criss Cross is a journey through the collection of the Gallery of Spiš Artists in search of the Cross as a sign and symbol. The intention is to transcend the religious symbolism of the Cross and thereby indicate new connotations and contexts through confrontations with individual artworks which have been carefully selected from the collection in order to provoke new dialogues. The chosen works are characterized by an expansive time scale, ranging from the early 20th century to the present day, thereby presenting the work of 27 artists from the collection in dialogue with works of 4 foreign artists (from the Czech Republic, Spain, Poland and Portugal) which offer a new perspective on the theme and expand the interpretational field. The exhibition is part of the dramaturgical exhibition cycle COLLECTION IN DIALOGUE.
The Cross is an integral element of our culture and also of Slovak national identity. The Byzantine double-barred cross, as borne by the missionaries Cyril and Methodius, is the central symbol on the Slovak flag. Standing on its three mountain peaks, the Cross demonstrates its place in our consciousness: the Cross is both central and elevated. The Cross is the pinnacle of church towers and steeples, a point to which our gaze is lifted. The Cross by the side of the road guides pilgrims and greets travellers as they enter towns and villages. It is both the beginning and the end. The Cross is a graphic depiction of the centre, a cosmic axis, the point at which heaven and earth meet. The Cross is also a symbol of the universal, archetypal man who is capable of expanding harmoniously in both the horizontal-rational and vertical-spiritual planes. We spend our brief lives under the gaze of the Cross so that we can then rest in eternity under its shade. The motif of the Cross is an ancient symbol of life. An equilateral cross set within a circle symbolizes the Sun as the giver of life. This motif runs like a golden thread through the depths of history, reaching back to the Neolithic period. It was the symbol of Sol Invictus, the Sun God who was extraordinarily popular in the late Roman Empire. Surviving relics reveal that the symbol of the Sun God partially merged into the motif of the Christian Cross following the Emperor Constantine’s adoption of Christianity as the official religion of the Roman Empire in the 4th century AD. The earliest depictions of Christ on the Cross are a negation of death; they are instead a representation of celebration, glory and life. Only in the medieval period do we see the acknowledgement of the aspect of suffering in the Crucifixion, with many works of art depicting a torn and battered human body at the very limits of its endurance. Yet here too an element of hope appears in the form of the green shoots visible in depictions of the Cross as the Tree of Life. In many narratives, the Cross is made of wood from the Tree of Life planted in the Garden of Eden. The cycle is thus completed – the death on the Cross grants us access to Paradise where the Biblical story of mankind had first begun.
Mgr. art. Katarína Balúnová, ArtD., exhibition curator