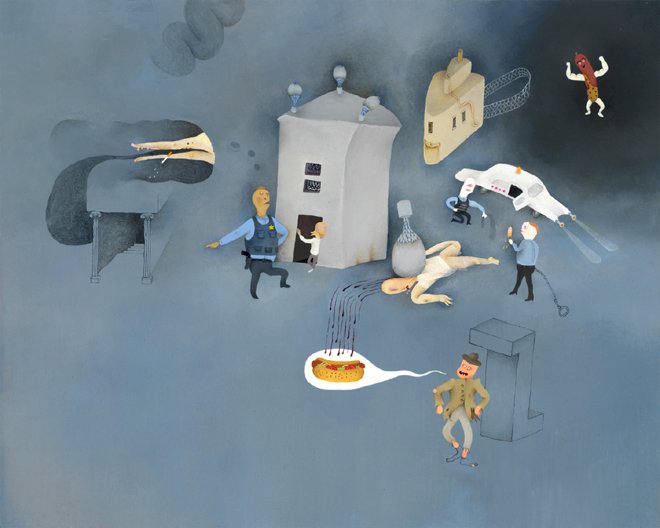 Rosean states: "For me, drawing is solving a math problem while working out deeply rooted anxieties and compulsions. It uses spatial reasoning to understand psychology. Inspired by the scenarios that play out in my dreams, I try to make sense of the dream-play by identifying their archetypal imagery. Ice cream truck, smoke detector, turnstile, homeless man, cell phone—the visual vocabulary that composes my dream scenery is personal and shared. Though my work is largely diaristic, I believe the scenarios I am representing through drawing speak to a collective anxiety, specific to our era."

"In this space of collective anxiety, time has collapsed and everyone is ugly. That uncanny feeling of being you but not you is ever present. In order to communicate multiple viewpoints and time collapse in my compositions, I have borrowed heavily from comic art and late medieval Sienese painting; in which the placement of imagery on the page can signify when an event happened, and its relative importance. Though I make drawings in series, each drawing stands alone as its own narrative. And while the narratives express feelings of estrangement and shadowy anticipation, they are attempts at connection."

Clare Rosean received her B.F.A. from the School of the Art Institute in Chicago, IL and her M.F.A. at the University of Chicago.  She has exhibited in New York, San Francisco, Seattle and throughout the Midwest and has received a Luminart Visual Arts Fellowship from the Union League Club of Chicago.  Clare Rosean "Middle West" is on view from March 2 to April 28, 2018 at Zg Gallery in Chicago.