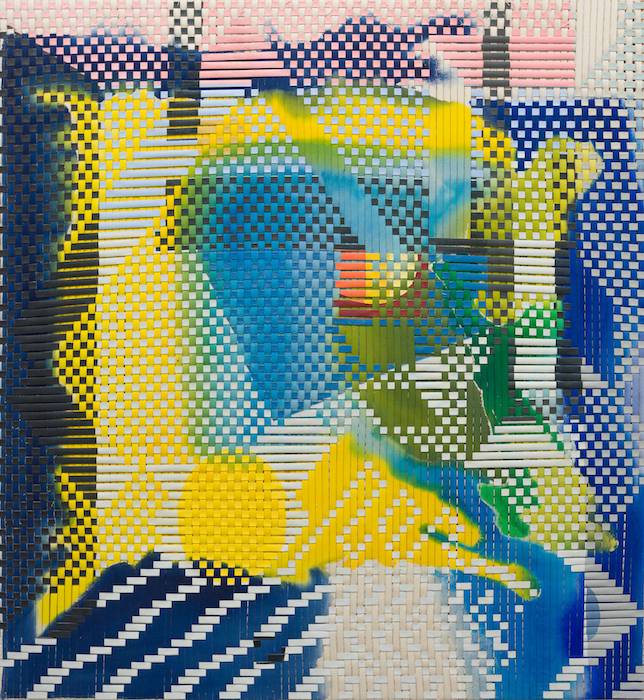 Johansson Projects is pleased to announce a forthcoming solo exhibition of recent works by Oakland-based artist Miguel Arzabe entitled Cóndor de Cuatro Cabezas (Four-Headed Condor), which will be on view to the public [by appointment] from May 8 through July 24. The exhibition’s title is inspired by the ancestral mythology of the indigenous Sacaca people Bolivia, who held a pantheistic conception of the world that featured the transposition and recombination of animal parts into divine beings. These beings continue to be expressed in the textiles of the region that portray pájaros monstruosos, “monster birds,” such as half-puma half-eagle, or a four-headed condor.

The works included in Cóndor de Cuatro Cabezas feature intricate canvas and paper weavings that are crafted from strips of painted reinterpretations of artworks by pre-war American abstractionists, which Arzabe weaves into new visual interpretations using improvised patterns inspired by Andean textiles. The four heads of the condor referenced in the exhibition title represent the various ‘authors’ of each work: the two artists whose works Arzabe deconstructs; Arzabe himself as the third artist who then reconstructs their work into a new, mixed form; and the viewer, who then engages with and creates new meanings from the resulting woven piece.

Arzabe says, “My weaving practice is a way for me to explore my own identity as an American with Bolivian ancestry. For many mestizos, the origin of the Indigenous bloodline is speculative, since only the European origins were codified. I want to confront the inherent white supremacy within that tendency of generations of families to highlight their European roots while neglecting their Indigenous ones. My work ultimately has to do with recuperation, the act of reinvesting old things with new energy, just as the condor bridges the worlds of the living and the dead.”

Miguel Arzabe makes colorful and dynamic abstractions that take the form of weavings, paintings, and videos. His materials include paper ephemera from art shows, reproductions of modernist paintings, and discarded audio recordings, which he then deconstructs and reverse-engineers into new forms. Drawing inspiration from the cultural techniques and motifs of his Andean heritage, Arzabe weaves the fragments together to reveal myriad intersections between form and content, the nostalgic and the contemporary, loss and recuperation.

Arzabe lives in Oakland and is a charter studio member at Minnesota Street Project in San Francisco. His work has been featured internationally at the Centre Pompidou in Paris; the Festival du Nouveau Cinéma in Montreal; the Geumgang Nature Art Biennale in Gongju; MAC Lyon; MARS Milan, RM Projects in Auckland); and FIFI Projects in Mexico City. In the US, his work has been included in exhibitions at Marylhurst University in Oregon); the Berkeley Art Museum; the Albuquerque Museum of Art; the de Young Museum; and the San Francisco Museum of Modern Art. He has been an artist in residence at Facebook, the Headlands Center for the Arts, Montalvo Arts Center, and the Santa Fe Art Institute. Arzabe holds a BA from Carnegie Mellon University, an MS from Arizona State University and an MFA from UC Berkeley.