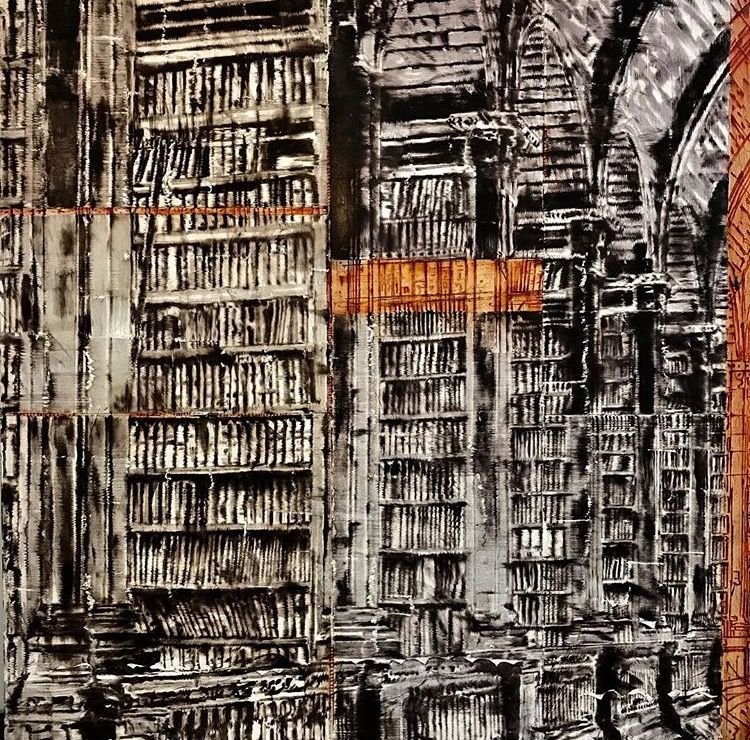 Cristin Tierney Gallery is pleased to present Sign of Abandonment, an exhibition of new paintings by Jorge Tacla. It opens with a reception on Thursday, November 2nd from 6:00 to 8:00pm, and closes December 16th. Sign of Abandonment precedes a major survey of the artist’s work at Fundación Corpartes, opening November 21st in Santiago, Chile.

Tacla’s new series of paintings continue the artist’s decades-long exploration of the invisible structures and systems at work in society. Like other recent works, they feature heavily impastoed, expressionistic surfaces wrought in oil and cold wax, and limited palettes of grey, blue, and red. Also similar are the artist’s subjects: buildings and real places, distilled from Tacla’s memory as well as his vast archives of images from photo albums, books, magazines, and the Internet. But whereas previous series often presented deteriorating or destroyed spaces to the viewer, the architecture featured in Sign of Abandonment remains seemingly intact.

This shift in depiction is key. Instead of urban ruins and rubble, the artist presents extant museums, libraries, and universities from all over the world. The political significance of these sites, which have traditionally functioned as centers of learning and as repositories of knowledge, is undeniable in the current era of alternative facts and moral relativism. By prominently featuring them in Sign of Abandonment, Tacla echoes the widely held belief that history’s lessons hold the secret to our future failures or successes.

The painting Señal de Abandono 22 (or Sign of Abandonment 22) illustrates the Trinity College Library in Dublin. Home to almost 200,000 rare and significant books, including the Book of Kells and a copy of the 1916 Proclamation of the Irish Republic, the Trinity Library is a valuable historic site. However, Tacla presents it as empty aside from the books—an allusion to the fact that spaces such as these are rapidly disappearing, moving away from their original missions, or growing increasingly devoid of patrons and visitors with the advent of the Internet. It has become a scene of abandonment. Presented together in a group, Tacla’s new series may be seen as a warning, and a call to remember our history before it is too late.

Tacla’s upcoming survey at Fundación Corpartes will showcase several never-before-seen paintings from the Sign of Abandonment series alongside some of the artist’s earliest canvases from the 1980s and 1990s. Entitled Todo lo sòlido se desvanece (or “All that is solid melts into air”), the exhibition is organized by curator and critic Christian Viveros-Fauné. A catalog will be published to accompany the show.

For more information please contact Candace Moeller at candace@cristintierney.com or +1.212.594.0550.