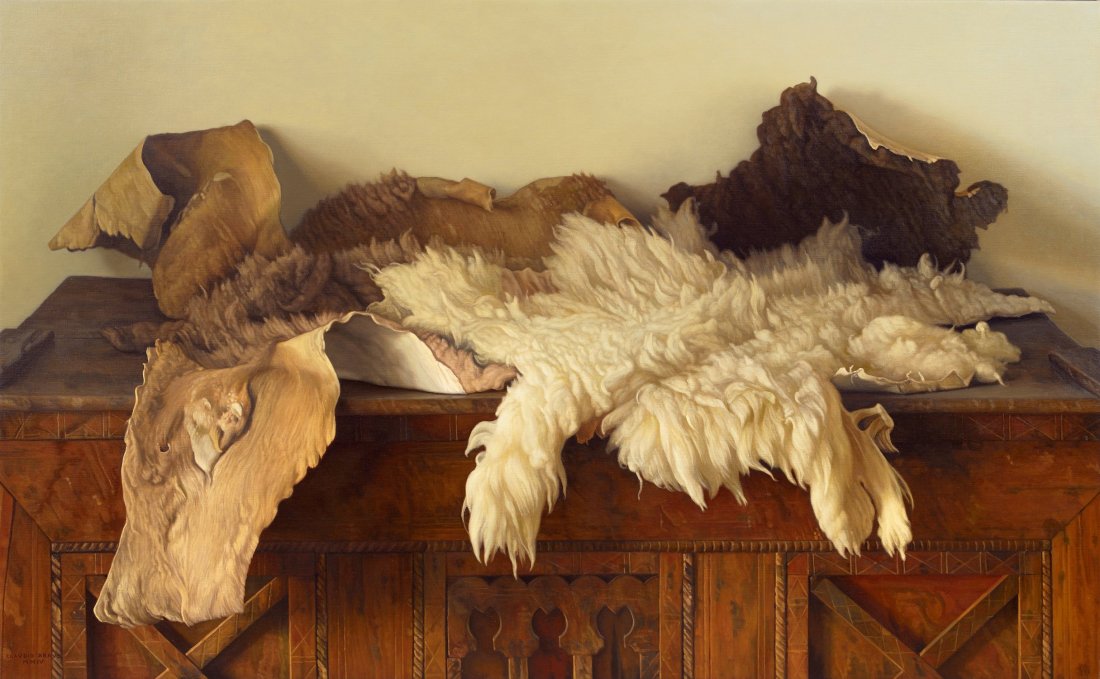 In his catalogue essay, Art in America contributing editor David Ebony writes, “Gifted with technical virtuosity, Bravo commands a seemingly effortless sleight-of-hand to enthrall viewers in unexpected ways.  Like a modern-day alchemist, he manages to transform everyday objects and ordinary subjects into something inimitable, rarified and extraordinary.  Even his most austere and nearly abstract compositions can inspire awe in their transcendental allure”.

Claudio Bravo was a painter of color and light. It was the extraordinary light of Morocco that drew Bravo to the country where he lived from 1972 until his passing in 2011.  He used this light to propel his art, rendering, in his still life paintings, objects from his own collections and his everyday life that he carefully arranged in the light to focus on their enigmatic meaning.  His gift for economy and nuance served his interest in evoking an emotional response rather than creating a mere depiction.  In the Forum Gallery exhibition, Moroccan Fans, 1994; Ritual Stones, 1997; Camel and Lamb Skins, 2004; and Yellow Marjana, 2008; are imbued with the harmonious color and spectacular light that set Claudio Bravo’s still lifes apart.

Inspired by the paintings of Mark Rothko and Antoni Tàpies, Claudio Bravo began painting the palpable textures and subtle colors of paper and fabric in the early 1960’s, and these subjects became the best-known of his works, remaining popular throughout the world during his lifetime and beyond.  The exhibition includes Three Aluminum Papers, 2010, and Red Cloth, 2011, Claudio Bravo’s last completed painting, a majestic, luxurious work over six feet tall, to be exhibited for the first time.

The earliest painting in the Forum Gallery exhibition is the haunting Nude Male Leaning on Column, 1979, recalling the Artist’s stay in New York City from 1969 to 1972.  An important example of Bravo’s figurative mastery, the silent, ethereal drama in this work is emblematic of Claudio Bravo, who said he owed much to Velázquez.

Often celebrated as a consummate draughtsman, Claudio Bravo worked on paper as well as canvas throughout his career, and his pastels and drawings are among his most sensitive works.  The shimmering color of the pastels and the depth and beauty of the drawings in the exhibition are exemplified by the pastels Green Sofa, 1991, and Opening the Door, 1991, and the drawings Two Heads and Hands, 1983, and Said, 1995, as well as the rare still life drawing of Engines, 2008.

Claudio Bravo was recognized with fourteen one-person museum exhibitions in the US, Chile, Mexico and France during his lifetime.  His works are included in the collections of the Museum of Modern Art and The Metropolitan Museum of Art, New York; the Philadelphia Museum of Art; The Museum of Fine Arts, Boston; the Museo Nacional de Bellas Artes, Santiago; the Ludwig Museum, Cologne, Germany, the Museum Boijmans Van Beurugen, Rotterdam, Netherlands; and many more throughout the world.  Claudio Bravo was chosen to represent Chile in the Venice Biennale in 2007.

Forum Gallery is located at 475 Park Avenue at 57th Street, New York, NY 10022.  Forum Gallery is open to the public from Monday through Saturday, from 10am to 5:30pm.  Please visit https://www.forumgallery.com/exhibitions/claudio-bravo2 to view the entire exhibition online. The exhibition begins on November 27, 2020 and will be on view through January 9, 2021. A full color catalogue accompanies the exhibition.