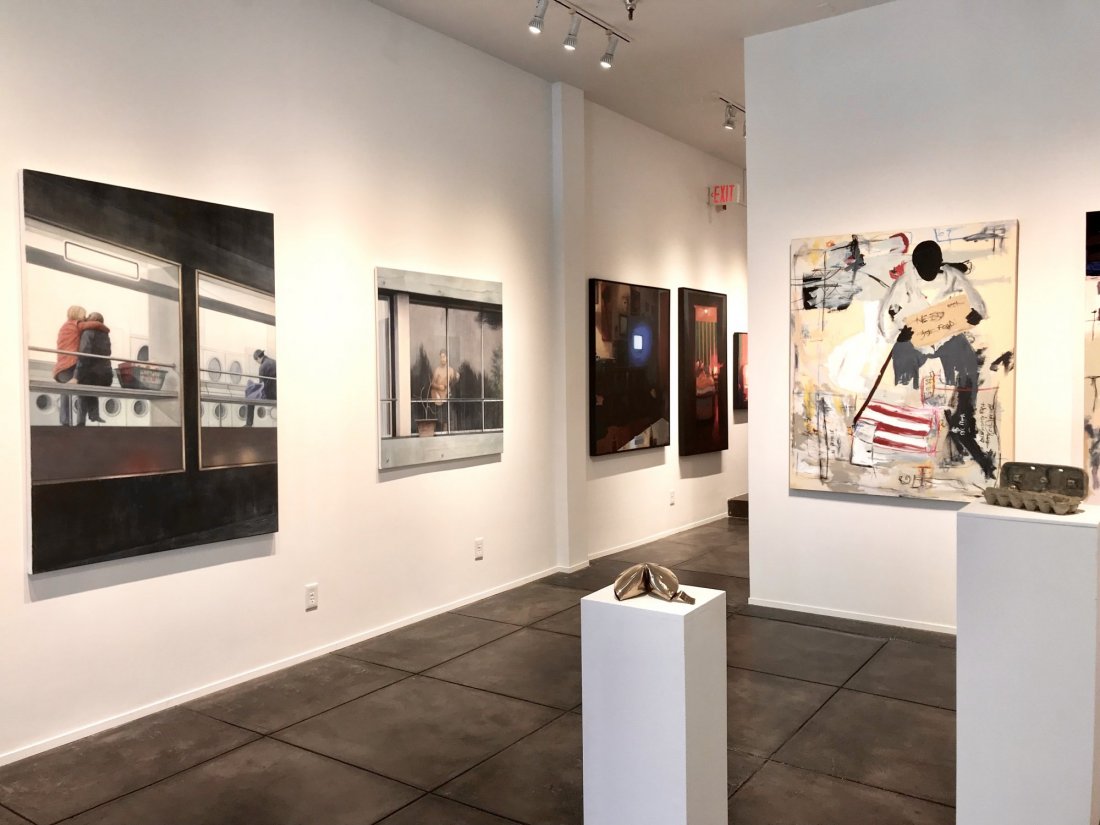 JONATHAN FERRARA GALLERY proudly presents the 23rd Annual NO DEAD ARTISTS International Juried Exhibition of Contemporary Art. For the 2019 installment of the exhibition, the gallery will host works by sixteen artists hailing from across the United States, as well as, Germany and Norway. The exhibition will be on view from 3 to 27 September 2019, with an opening reception on 7 September, 6-9 pm in conjunction with the Arts District New Orleans’ (ADNO) First Saturday Gallery Openings.

The NO DEAD ARTISTS exhibition was founded by Jonathan Ferrara in 1995 to give a voice to emerging artists. The exhibition's name is derived from the old adage that artists never achieve success until they are dead. NO DEAD ARTISTS turns that notion on its head and often gives emerging artists their first break in the art world. In the 90's, the exhibition was open to New Orleans-based artists and subsequently grew to include artists of Louisiana, then becoming a national juried exhibition in 2010. And in 2014, the exhibition went international.  Now in its 23rd iteration, the exhibition has been a springboard for numerous artists; leading to national press coverage, recognition, gallery representation and acquisitions by museums and other prominent collections.

Before joining Matthew Clayton Brown in 2006, Robyn was an Assistant Vice President in Impressionist and Modern Art at Sotheby’s for nine years. Prior to Sotheby’s, she worked with George Stern Fine Arts, Los Angeles, a leading art dealer specializing in California paintings, and Nedra Matteucci’s Fenn Galleries, Santa Fe. Robyn has been a member of the Appraisers Association of America since 2007 and is certified in the Uniform Standards of Professional Appraisal Practice (USPAP). She is also a board member and past president of the Contemporary Art Center, New Orleans, trustee of the Metairie Park Country Day School and a member of Art Table and the Director’s Council of the New Orleans Museum of Art.

Carmon Colangelo is the inaugural dean of the Sam Fox School of Design & Visual Arts, bringing together Washington University’s historic Colleges of Art and Architecture and the distinguished Mildred Lane Kemper Art Museum into a vibrant creative community.  Colangelo is a widely exhibited artist who combines digital and traditional processes to create colorful, mixed-media prints and paintings that explore ideas about the human experience and contemporary condition. He earned a BFA in printmaking and painting from the University of Windsor in Ontario and an MFA in printmaking from Louisiana State University. Colangelo has been featured in more than 40 solo and 150 group exhibitions and his work has been collected by such museums as the National Museum of American Art, the Whitney Museum of American Art, and the Saint Louis Art Museum.

As Executive Vice President, Partner and Show Director of Art Miami LLC, Korniloff oversees the management and creative direction for Art Miami, CONTEXT, Aqua Art Miami, Art New York, Palm Beach Modern & Contemporary, Art Wynwood, Art Southampton and Art Silicon Valley/San Francisco. He is also one of the founders of LUXE Show Ventures. In 2008, Korniloff took the helm at Art Miami LLC and swiftly revitalized Art Miami, now in its 28th year.  By expanding the high-quality and diverse group of international exhibitors, galleries, and institutions, Korniloff reorganized the fair to attract an impressive audience of collectors, dealers, curators and artists.  This expansion and move to the Wynwood Arts District successfully repositioned the show as the city’s most important and anchor fair during Art Week, which takes place in early December when thousands descend upon Miami for a flurry of cultural events and fairs.  Art Miami is now the number one attended fair in America and second globally it now attracts around 85,000 attendees annually.

Of the approximate 3,000 artworks submitted to this jury by over 600 artists worldwide, only sixteen artists were selected to have their work exhibited at JONATHAN FERRARA GALLERY.

Comprised of painting, sculpture, drawing, photography, printmaking, mixed-media, installation, ceramics, video and new media, NO DEAD ARTISTS continues to exhibit a great diversity in media with a cohesive cross-section of the pulse of Contemporary Art. Presenting just over 30 artworks ranging in media, style and purpose from the augmented reality installation by local artistic duo “Momma Tried” to the voyeuristic canvases of German painter Susannah Storch. Other exhibition highlights include the return of Tom Wegrzynowski’s socio-political paintings which were previously included in the 2014 exhibition, Chris Barnard’s monumental-sized, architectural paintings and Abe Abraham’s figurative video work. For the 23rd year in a row, No Dead Artists showcases the latest trends and talent in Contemporary Art adhering to its mission of giving emerging artists a platform to have their creative voices heard.

For the grand prize of the exhibition, one of the selected jury winning artists will be awarded a solo exhibition in 2019 at JFG. Previous recipient awardees: Nikki Rosato (2012, Washington D.C.), Marna Shopoff (2014, Indianapolis), Richelle Gribble (Los Angeles, 2015) and Jenny Day (Santa Fe, 2017) not only received the solo show at gallery, but also, have successfully gone on to exhibit in art fairs in New York, Miami, Basel (Switzerland), Leipzig (Germany), San Francisco, Houston and Seattle and other traveling exhibitions and museums worldwide. These artists and the No Dead Artists exhibition have garnered great interest from curators, museums and press as well as been acquired by many prominent public and private collections. . . Stay tuned for the announcement of the 2018 winner at the close of the exhibition.