Taylor Simmons: Everything All At Once 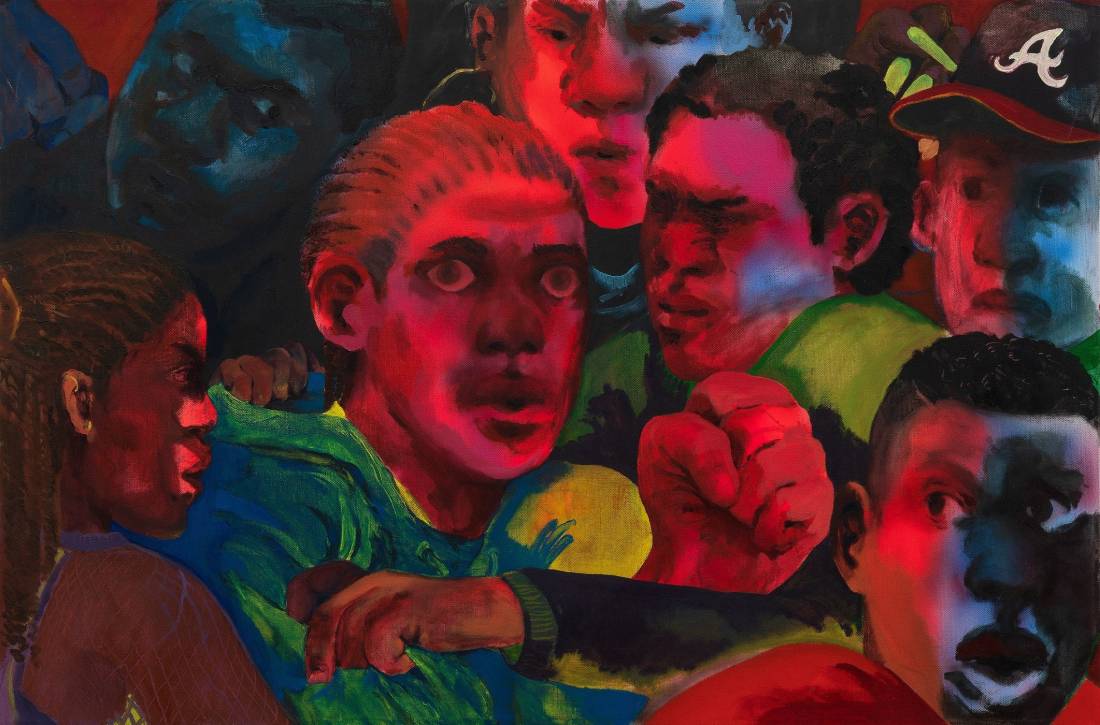 Public Gallery is pleased to present Everything All At Once, the debut solo exhibition of New York-based artist Taylor Simmons. This body of new paintings highlights his exploration of figuration through neon-coloured, cinematic compositions. The exhibition title refers to the momentum of this inaugural display – a cast of vivid characters who vibrate with nervous energy and anticipation.

Simmons’ process centres on his archive of compulsively collated imagery. He gathers fragments of what is around him to create a reflection of who he is and what he sees: a face, a pose, a moment, weaving them together to form dense multi-dimensional scenarios. Growing up in Atlanta, Georgia, a city renowned for it’s musical heritage, the artist cites music as a major influence on his practice – he visually samples, riffs and remixes to make new, while retaining a reverence for his sources. Simmons’ output is inherently intimate; clearing his mind of these accumulated images, exorcising them as a means to question why they meant something in the first place.

In Whole Lotta Red, 2022, a green, suited figure appears self-assured while smoking a cigarette on a train. Could this be a decadent portrait, or otherwise? Simmons carves out another person in the background – through the window they ascend stairs, introducing a new story to be told. Three narrow canvases illustrate bodies that seem to dissolve away from one another, like spectres stepping out of their former selves into a mysterious limbo. Within the airbrushed paintwork, dual studies play out. In Big Feelings, 2021, an individual clutches a bunch of flowers, while another behind peers through a wire fence, their heads aligning in a moment of serendipity.

In reference to his pursuit of meaning, the artist recalls a visit to a touring Pablo Picasso exhibition when he was a child. His reading of the works at the time was very different to his teacher’s – yet no one was wrong, nothing is finite. Through his hazy, fluorescent depictions, Simmons gifts a breadcrumb trail of visual clues, leading the viewer down sensory and cognitive pathways of their own discovery.

Taylor Simmons (b. 1990, Atlanta, GA, USA) lives and works in New York. His practice incorporates painting, printmaking and drawing to make predominantly figurative works. He studied printmaking at the Savannah College of Art and Design in Georgia, USA. His work has featured in group exhibitions including Friend Zone curated by Vaughn Spann at Half Gallery, New York, USA (2021) and Frieze New York (2021) with Half Gallery.