Mike Meiré - Outside the Visible 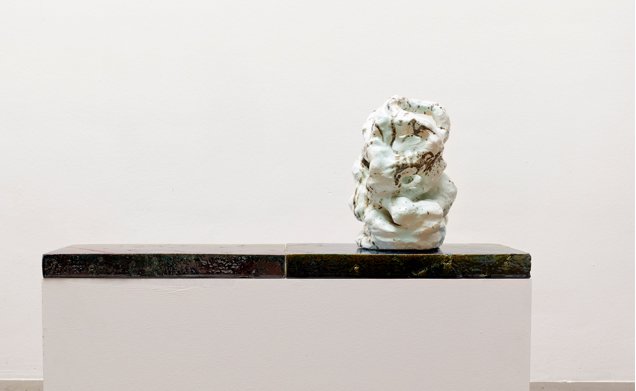 Bartha Contemporary is delighted to announce ‘Outside the Visible’, a solo-exhibition by Mike Meiré (Germany, b. 1964). The show will feature new works in a variety of media, including ceramics, aluminium, silver,
bronze, acrystal as well as a selection of recent paintings on Newsprint. Involved in numerous projects at any given time, at his studio as well as through his work as an art-director, Mike Meiré’s practice evolves from a dialogue between design and fine art.

The artist’s second solo-exhibition with the gallery includes a new body of predominantly sculptural works, that aim to trigger a range of conscious and emotional responses. The viewer is invited to reflect on often overlooked everyday objects, that make up the fabric of the world that we occupy.
By modulating Newspapers or plastic Buckets and thereby changing their original function and appearance, Mike Meiré emphasises their dual existence as mere utilitarian objects on the one hand, and “abstract auto portraits” on the other.

The exhibition follows on from his 2013 show at Figge von Rosen in Berlin, entitled ‘Cologne Material’ this show, which showcased a number of early incarnations of the works now shown here in London, first described an interest in the humble every-day objects and the artifice, “expressing the aesthetic conflict between two opposite views”. At their origin the latest works relate to Duchamp’s Fountain (1917), however unlike this icon, the original function of Meiré’s objects are not immediately recognizable: the source material is alienated and turned into something independent, without denying their origins. This practice refers to that of the objet trouvé; here, however, it is radicalised, revealing both the abilities of the viewer and the potential of the object itself.

In some instances, this process of alienation is taken to extreme, best described in a suite of precious metal cast objects, which are re-incarnations of a single humble newsprint pages. Here the circle between the artists own life and his work goes full circle, as Meiré objectifies the Newspaper and elevates the utilitarian to a precious and undeniable seductive wall-sculpture.