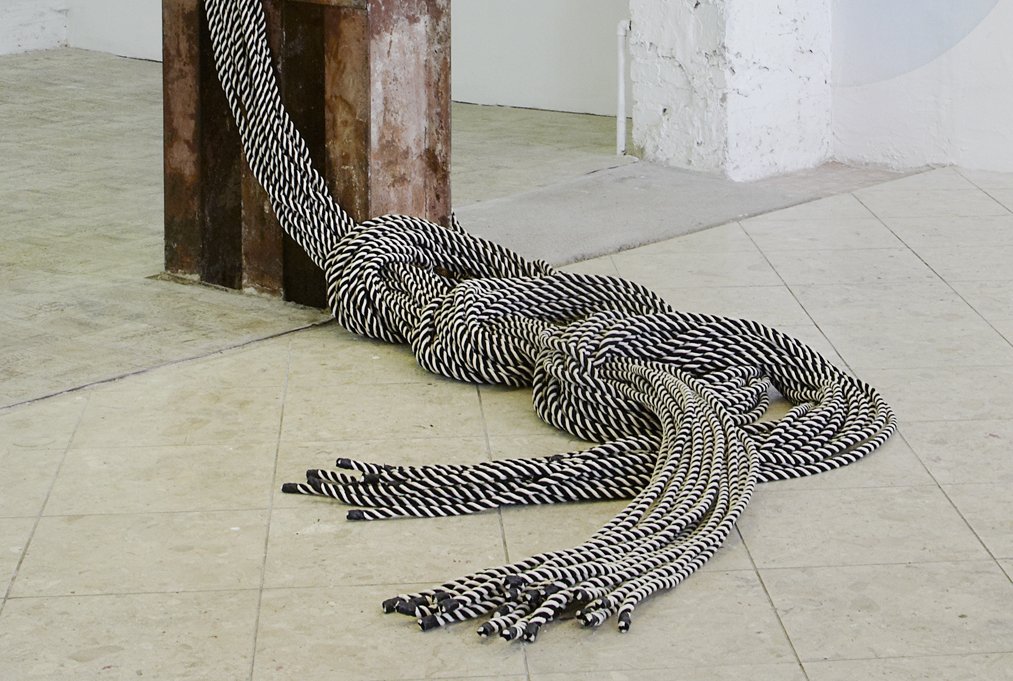 VITRINE is delighted to present the  first solo exhibition of Brussels-based artist Kato Six in the UK. Embracing the tableau-like quality of VITRINE, Six interrogates materiality and immateriality, three-dimensional and two- dimensional, presence and absence.

Through an explorative approach and a rich breadth of material and processes, Six produces minimal but acute sculptural interventions that engage with the margins of space and grapple with the limits and possibilities of form and design. Familiar materials reminiscent of the domestic such as wallpaper, textiles, kitchen table tops and rope recall not only personal, but collective memories. By reconfiguring, disconnecting and abstracting these familiarities, Six produces theatrical assemblages that reference still lives distanced from their original function.

Seemingly drawing influences from arte povera, modernism and abstraction, Six is interested in the role of craft within artistic practice such as carpentry, rope making and knitting. For this exhibition, she presents a series of site-specific sculptural configurations that explore the infinities of VITRINE’s unique architecture. Central to the installation hangs two meticulously knotted rope works which thread throughout the gallery space. A recurring element in many of Six’s assemblages, the work responds directly to the topology of their environment. Amongst the dominant position these works occupy, a series of framed ink boxes lay beneath, reflecting their immediate surroundings and in turn changing the viewer’s perspective of how one engages with the architecture.

As well as the physical and often harsh materials that inhabit the gallery space, intimate gestures are seen throughout. Calling to the intangibility and impermanence of material and matter, coloured MDF dust particles settle across the gallery walls. Alluding to the remnants of former sculptural works, these framed and rendered shapes not only evoke the ephemeral and fragile nature of materiality but also reference the traces and loss of human activity. Through considered use of scale and placement of objects, Six encourages, heightens and triggers the viewer’s awareness of the physicality of space.

Interested in not only the placement of works, but the placement of the viewer; Kato constructs a multifaceted environment which can be viewed from a multitude of perspectives: across the public square, against the window, and through reflections and shadows cast around the works and by the works themselves. Seen in its totality, the work becomes framed and contained by VITRINE itself.

‘State of Matter’, curated by Chris Bayley, continues VITRINE’s engagement with Six’s practice following her participation in the group exhibition ‘Identify your limitations, acknowledge the periphery’ in Basel in 2017.

Kato Six (b. 1986 in Bruges, BE) lives and works in Brussels. She obtained an MA in 3D-multimedia in 2010 and an MA in graphic design in 2008 from School of Arts / KASK, Ghent, BE and was a participant at Skowhegan School of Painting and Sculpture,, USA in 2017. Her work has been exhibited at; Komplot, Brussels; CHANGE-CHANGE, Budapest; VITRINE, Basel; c-o-m-p-o-s-i-t-e, Brussels; KIOSK, Ghent, BE; and P/////AKT, Amsterdam. She was an artist in residency at Wiels in Brussels and RU in New York.