The Grass at our Feet 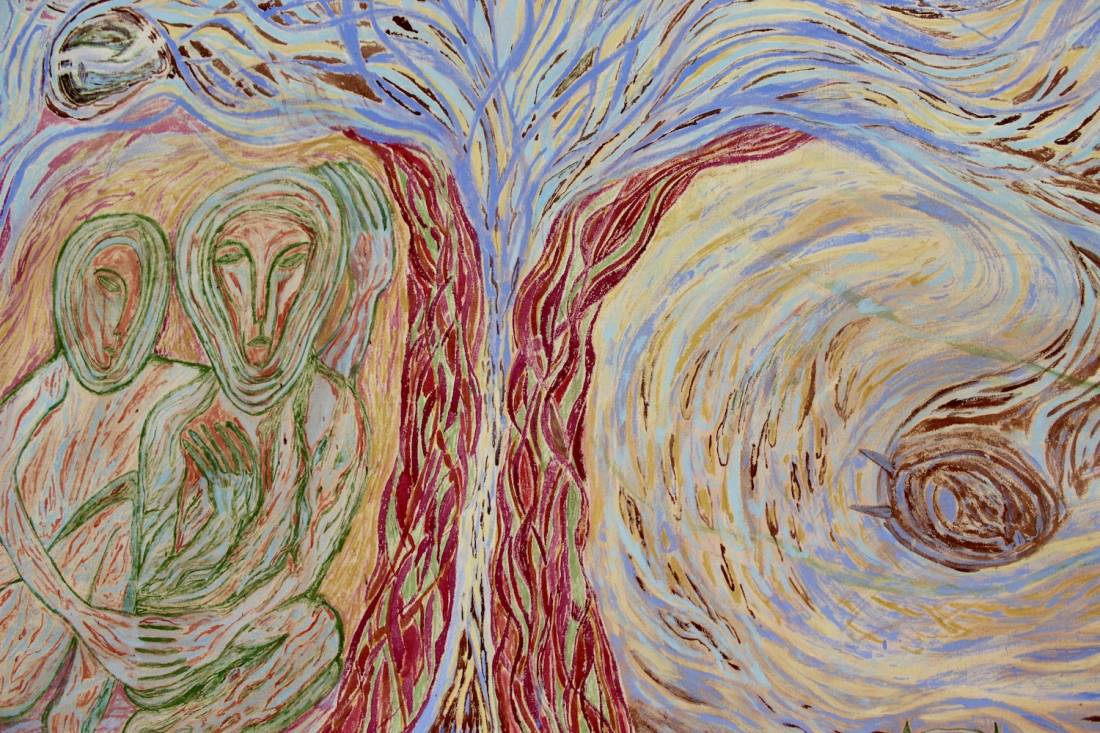 'The Grass at our Feet' is a group show at VITRINE, Basel which explores myths, folktales, and folk methodologies, that have derived from a variety of cultures and sources, related to heritage and roots of identity with a shared rumination on chaos and the Earth.

The exhibition brings together young emerging artists of different nationalities: Ukrainian-Canadian artist Ayla Dmyterko, Danish artist Cecilia Fiona, and Ecuadorian artist Leandro Pesantes B. The exhibition is the first time all artists have shown in Switzerland. It is a continuation of the group show 'The Sun and the Moon' presented at VITRINE, Basel between Mar–Jun2021, which looked at how forces of nature such as the Sun and Moon have been narrativised throughout history into lessons and stories that have been passed down through generations and now form folklores.

The two exhibitions foster the importance of cross-cultural exchange, presenting artists from different countries, places, and heritages, who work with the subjects of myths and folktales, placing them in dialogue with each other. In doing so, the viewer begins to see the interrelated elements of stories and cultures that at first are ambiguous and vague, which then begin to become clear similarities in the form of a character, a lesson, or subjects, etc. Cross-cultural exchange manifests itself through these stories which spans distance and time creating a shared experience.

As a third generation Ukrainian, who grew up in the large diaspora community in Saskatchewan, Canada, which formed in early 1900’s by those fleeing the Soviet-communist collectivisation project of their farmlands, and the Ukrainian genocide by forced starvation imposed by Joseph Stalin, Dmyterko uses painting, sculpture, textiles and film, to research and explore her and her community’s heritage as a displaced, but now rooted group. The work shown in 'The Grass at our Feet' consists of six framed paintings, five of which are shown as part of the exhibition. The paintings include formal qualities similar to religious paintings with layered ethereal, dreamlike characteristics. Recurring in each painting is the symbol of the flower or bulb, which is depicted as blossoming and withering, a signifier of the cycle of life and humans’ current pillaging and degradation of the natural world. Three of the works have ornate, wooden frames, which have been reconfigured by the artist from antique furniture. The other three are simple wooden structures that have been submerged in a water bath and had wax poured over them and then left to harden, a process replicated from an Eastern European folk healing tradition.

Dmyterko uses her familial lived experience, their generational histories, and ancestral wisdom, to revive and disseminate cultural memories in relation to subjects of trauma such as displacement and environmental collapse. The result is visually powerful manifestations of energetic style which seems to want to transcend itself as an art object. Shown concurrently to the paintings are new stoneware sculptures with charcoal glaze incantations and drawings, based on Ukrainian Paska breads that get blessed at church on Easter Saturday, as well as springtime wreaths that are made as part of Slavic Pagan spring festivities.

Fiona is a self-trained artist who has no formal or traditional art training. She graduated from Art History at the University of Copenhagen, DK during summer of 2021 and has since started a painting practice, gaining national attention for her unique style and imagery, working with rabbit skin glue. Her paintings are fantastical creations that offer a glimpse into another world behind reality, inhabited by creatures that are part way between human and animals. The worlds she creates are full of chaos and magic, blending events and figures from existing stories, myths, legends and folklore of different regions. She creates her own mythological world proposing a new fluid, transformative narrative on the relationship between man and earth. Using the mythical, or the idea of the myth, to explore the existential mysteries of life, Fiona creates dreamlike worlds in which life and death occur simultaneously, and where the viewer may recognise the story and the figures, but simultaneously find themselves in the middle of a mystery.

As part of the exhibition, we are presenting two new, double sides, folding screen paintings, which expand on the mediums format as being predominantly wall based. The artist's skill is highlighted in the painting’s complex compositions and details, blending figures into one another creating a state of flow and tumult on the canvas. A number of her works depict the Earth’s surface and what lies beneath it, usually connected with a portal between the two, or showing numerous layers, each seemingly blossoming with life.

Working with painting and sculpture, Leandro Pesantes B's work brings him closer and more connected to the world he inhabits. Branching from his exploration and practising of rituals, including the use of medicinal herbs, specific to the indigenous communities where he lives in Guayaquil, Ecuador, Pesantes B. looks for meaning in the world, trying to heighten his psyche to bring him closer to it. He uses his practice as an artist to do this, mirroring the aesthetics of ritual and the symbology of divination. His series of charred clay sculptures 'Tarot', began in 2021, refer to Tarot cards used to represent life's karmic and spiritual lessons through imagery, symbolism and story, and are traditionally used by those searching for greater meaning and understanding in their life.

Part magic, part religion, his work has roots in, and associates itself with, natures energy and traditions passed down and shared within Ecuador. He is interested in the myths, legends and tales, which influence cultures and religion, which can be seen most predominately in his painting work. His paintings have a stormy atmosphere, as if nature has been disturbed, featuring rural landscapes with a head of a 'divine figure', which seems to be more than human, with a large, protruding head, emerging from the Earth.