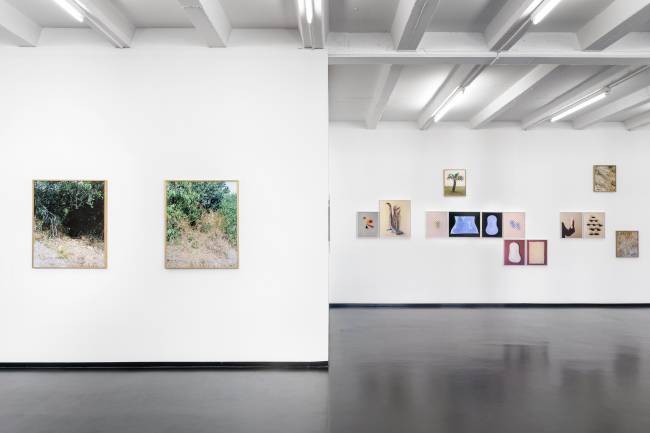 Galerie Wilma Tolksdorf is pleased to present the exhibition Corpi by Johanna Diehl. The photographs were first shown in 2021 at the Felix-Nussbaum-Haus in the Museumsquartier Osnabrück in the solo show Johanna Diehl. Taubes Geäst. For this exhibition, Diehl delved deeply into the life and work of Jewish painter Felix Nussbaum (1904-1944). In her works, Diehl reflects on the biography of Nussbaum, the artist of the New Objectivity, which was marked by persecution, flight, exile, and isolation, and examines in what way his powerful work, marked by resistance, points at our own present day and can say something about the brokenness of the present.

In doing so, the artist has been especially drawn to the things at the edge of the paintings. Trimmed trees, musical instruments, gestures and colors: Things that do not directly catch the eye, as they are on the periphery of the picture, in a sense in the "folds" of the painting. Diehl's artistic approach is characterized by a great sensitivity to direct the gaze to what is not in focus.

The black flags in Nussbaum's Orgelmann, 1943, which marked the homes of the sick in times of plague and serve as metaphors of exclusion and isolation as well as death and ruin in his painting, for example, provided the formal template for the photographic wall objects Fahne I-III. The artist extracted and enlarged the outlines from the painting and filled the forms with pure color taken from the skin tones of Nussbaum's figures in a photo-technical process in an analog color lab. Diehl's photographic, corporeal interpretations of the flags act as a powerful commentary on the flags in Nussbaum's famous painting, which bear witness to decay and ruin.

The imprints and fragmented sections of violins and cellos in the works Gipskörper I-III, Schnecke I-II, and Schwarm (Sammlung von Kinnhaltern) refer to musical instruments once present. Their sound-producing bodies are no longer present, but traces of their presence have been immortalized in the plaster. Geste I, in turn, depicts the hand of a lutenist grasping a note. The instrument is neither visible nor audible, yet the note is imaginable. The artist makes use of the motifs of unplayable instruments in Nussbaum's works, which can be read as symbols for his silent, unnoticed work in exile.

In the series of works Chemin Walter Benjamin I-IX and Saint Cyprien I-XVI, Diehl addresses how history inscribes itself in nature and remains imaginable and tangible in the present. The former bears the name of a hiking trail that traces the route of Walter Benjamin's unsuccessful escape attempt in the Pyrenees. The trampled undergrowth, the partly dead branches and trees, and the stones on the path allude to the hopelessness of the fate of the philosopher, who took his own life in Portbou after being refused permission to continue his journey. In St. Cyprien, not far away, Nussbaum had been imprisoned before escaping into exile. The palm trees and beach vegetation, growing in hostile surroundings and adapting to the difficult conditions, point to the will to survive and the resistance of the artist, who never stopped painting despite his lack of resonance in exile. Pigmente I and Garten (Nussbaum Baumgruppe), as counter-images to the faded growths, dead branches, and black-and-white plants, embody a perspective of vitality and hope that opens up in the face of the memory of Nussbaum's life and work in today.

Johanna Diehl (*1977 Hamburg) lives and works in Berlin. She studied photography and fine arts at the Hochschule für Grafik und Buchkunst in Leipzig with Prof. Timm Rautert and as a master student with Prof. Tina Bara, as well as at the École Nationale Supérieure des Beaux Arts in Paris with Christian Boltanski and Jean-Marc Bustamante. Her works have been shown in numerous national and international exhibitions and are part of the collection of contemporary art of the Federal Republic of Germany, the DZ Bank Kunstsammlung, and the Bayerische Staatsgemäldesammlungen, Sammlung Moderne Kunst der Pinakothek der Moderne, Munich, among others. The artist, who has won several awards, has been Professor of Photography at the Faculty of Design in Würzburg since 2019.