THE UNSEEN HUMAN INTERACTIONS OF URBAN LIVING EXPOSED: AN INTERVIEW WITH DAVID FEBLAND 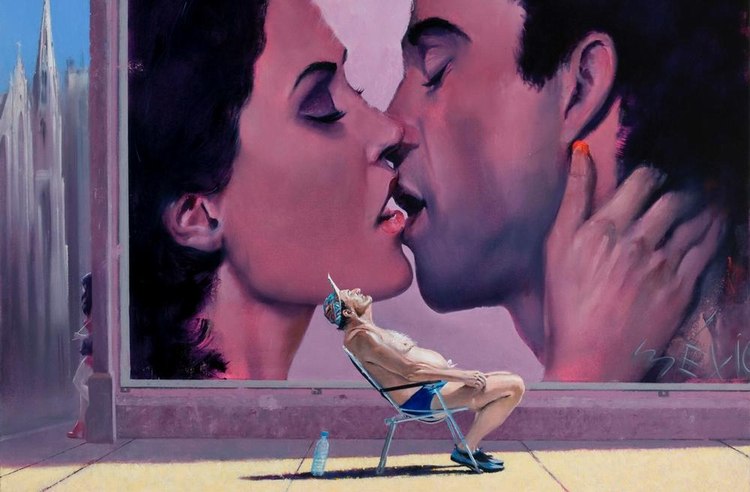 1. You are a self-taught painter. What initially made you want to become an artist ?

That’s a rather difficult question to answer because unlike most traditional forms of work, the creation of art is instinctive, rather than a choice. The harder enterprise is to resist the urge to create in favor of other life choices. I’ve often said that ‘Art finds you, rather than the inverse’.

2. Is there any particular reason why you chose to use the traditional media of oil painting to depict such current subject matters ?

Oil Paint is the king’s medium. It is flexible, versatile, responsive & challenging to master. Beyond that, my work is driven by contemporary narrative ideas, and as such does not depend upon the newness of its medium to communicate with its audience.

" Oil Paint is the king’s medium. It is flexible, versatile, responsive & challenging to master."

3. What are the major issues you want to highlight through your works ?

The major themes of my work deal with the interaction of individuals with the physical world. Isolation, human interaction, issues of privacy and conflict in dense environments, anxiety and its counterbalances are all themes that I return to throughout my work. The context for exploring these issues are often pictorial representations, mostly invented, that describe the common interactions of contemporary life that go un-noticed.

4. Which of your pieces do you think conveys those issues in the most striking way? Why ?

This, again, is a hard question to answer after 25 years of returning again and again to overarching themes. I always think that the current painting in front of me has the potential to be the piece best capable of expressing an important idea - summoning an accumulation of perception and craft and a refinement of concept. If this isn’t true, then why all the hard work? Why all the reductive effort? Having said that, there are always high-water moments of achievement in the life of a career, a point in time when the stars align, when, as in the words of Peter Gallagher’s character, the producer in The Player, 'these film scripts write themselves’.

5. Who or what has been the biggest single influence in your way of thinking ?

I was a 6-year-old child growing up in the bucolic countryside of Southern England when suddenly my family relocated to Coney Island, Brooklyn. It was 1955, during the ebbing but still raucous era of sideshows and bawdy entertainments of the working class seaside town.

My new neighborhood was a lively place where Freak Shows were commonplace and the people who worked them for a living went about their local errands after hours. This seminal experience gestated for a long time before finding its way into art as I engaged in a variety other life pursuits, but it formed my view of public life forever. I never really took my eyes off the street again, and l believe that at that early age my interest in human interaction with our physical surroundings was set. However unconsciously, my lifelong determination to cast the world around me as dramatic narrative was established.  As a young student at architecture school, I began an academic study of crowded city environments, reading many of the urban and cultural theorists of the 1960’s and 70’s. I began to observe such life directly after moving to New York City in the late 1970’s. Art was always in my family. My mother was and is a professional fine artist, and at an early age I was exposed to contemporary painting and sculpture in the great museums. It became a natural fit, when the time came, to embrace picture making as a way of expressing my own view of the observable world.

6. You bicycled through 55 countries around the world. Can you tell us some of the most memorable observations you made which later inspired you ?

Over 35 years of traveling the globe, I have developed the conviction that despite great differences in cultures, many human interactions are universal in nature. Our desires to express love, our reaction to stress under extreme conditions are recognizable in very different environments. Additionally, the clash between Eastern and Western thinking remains consistent through time. Thirty-five years ago, while traveling in Morocco, I participated in an early-morning voyage into the dessert that crystalized this separation of cultures. A group of us, all Westerners, hired a jeep with a local driver to see the sun rise over the dunes. We were impatient to get there while the driver stopped well short of our destination, seemingly for no reason. 29 years later, while flying to London on an Arabic-owned airline, during a mid-flight call to prayer where all men kneeled facing a symbolic red dot on the ceiling of the fuselage, I recalled this earlier experience and soon after created the painting, Ka’aba, a re-creation of that long-passed moment.

" I have developed the conviction that despite great differences in cultures, many human interactions are universal in nature. Our desires to express love, our reaction to stress under extreme conditions are recognizable in very different environments. "

7. What are you currently fascinated by and how does it feed into your work ?

Lately, I am experiencing in a mental departure from the physical world l occupy. I have migrated from the crowded, cacophonous city in which I find myself. As a result, the paintings I’m producing right now are more spacious, filled with more light and air; encompass a vastness unavailable in New York City.  Themes of isolation have been transported to the world beyond.

8. What is the key to success these days for any artist hoping to make a name in the Art World ?

As a practical matter, this is unanswerable. So much of the art world is irrational in nature. Serendipity & chance play a substantial role in raising an artist’s profile. There are, however, a few things an artist should do to place one’s self in the path of good luck: circulate, both literally and digitally. There is no chance for success if no one knows you exist.  Do not follow trends. Dig deeply and find the themes that are crucially important to you. If your work isn’t an honest reflection of who you are as a human being, you are wasting your time. Better to go into law or politics where inauthenticity will not serve as an obstacle to fame or material success.

" Do not follow trends. Dig deeply and find the themes that are crucially important to you. If your work isn’t an honest reflection of who you are as a human being, you are wasting your time. "