SHE'S HAD HER WORK FEATURED ON 'THE CATCH', FIND OUT MORE ABOUT HER STYLE AND HER MULTI-MEDIA PIECES MARIA KREYN 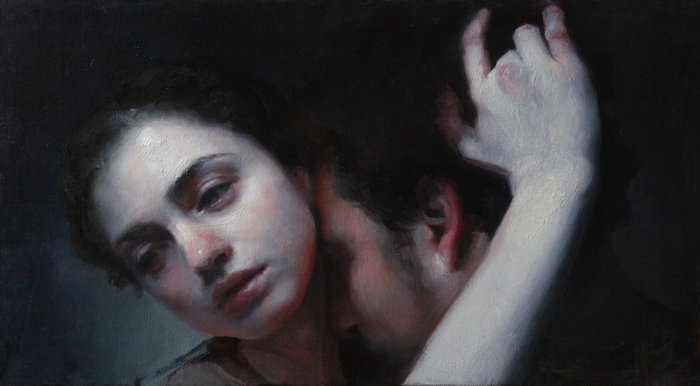 Tell us a bit about yourself and your evolution as an artist?

As a child I would doodle all days long with pen on paper. I loved surrealism, and Salvador Dali. In a way, looking at his work also inspired my interest in science. His work always seemed to reference some kind of understanding of origins, whether religious or scientific— not only would you see distorted, wild figures, but also cells dividing, DNA coiling, holograms, experimental renditions of the forth dimension. So these worlds of drawing, art, and science, were always blended for me. As a teenager I discovered Renaissance drawings and Baroque painters, and over time my drawing began to change from investigating purely imaginative content to being able to deeply see the world right in front of me. At that time I was still only drawing. I went on to study philosophy and math at the University of Chicago for a couple of years, and when I was finally magnetized into the world of painting at age 20, I left university and dove into oils. Figurative painting allowed me to turn the surreal world of external visual symbols inward, into the interior psychological world of the individual mind. The nuance of internal emotion became equally as intense and psychedelic, just more elusive. With the surrealist approach I felt like I was closing my eyes and reaching my hand out into a universe of infinitely complex images, able to grab any which one, and there were many. With figurative painting, the process felt completely different. I felt as though I was wandering with my eyes open, but in darkness, attempting to find and grab ahold of something that seemed literal, but so much more illusive than my imagination, and to illuminate it. Even as I write it, it must sound vague, but probing the labyrinth of the human experience has that feeling for me. Perhaps that is why the paintings take on their chiaroscuro form.

My work is very much indebted to and paying homage to the western tradition of painting. I’m reframing these techniques and using them to confront our contemporary world—one of speed, mechanization, and detachment— in order to ask, how can we stay deeply human in the face of this rapid political and technological change? I feel like the chaos of our time actually throws in relief the type of intimacy and human connection I’m painting for and about. So even though my characters are deeply emotional, and often physically connected, they are suspended in a state of ambivalence—at once confronting  their intense individuality (sometimes even isolation), and their need to merge with something larger. Likewise, the interaction of the figures in the paintings is meant to translate to the interaction of the viewer with those characters—deeply connected, distant. 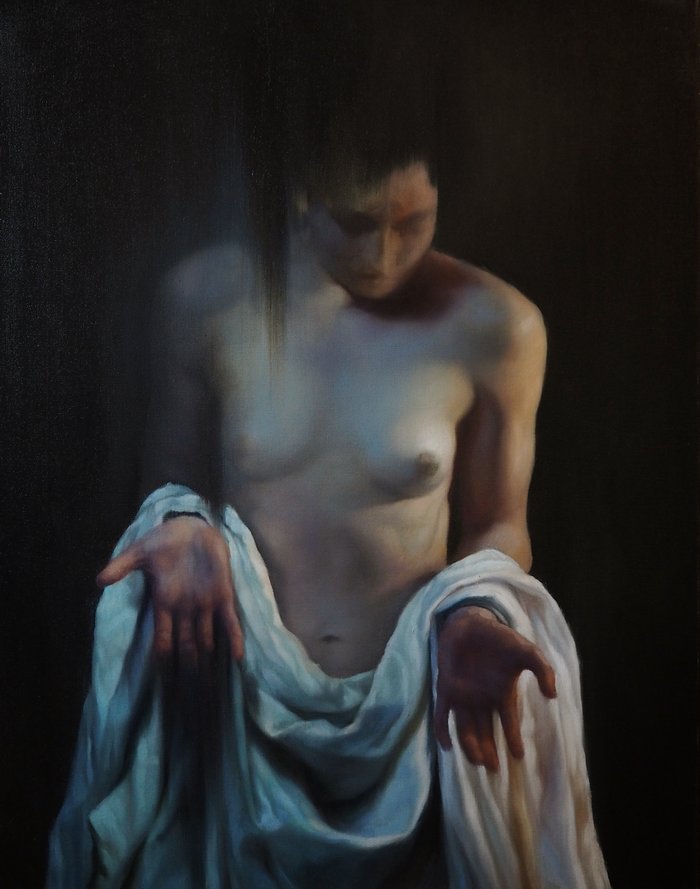 Your work ‘alone together' has recently been featured on television show 'the catch’, what was it like to be asked and why do you think they selected your painting?

The writers scoured the internet looking for a painting that would help them tell a specific story of connection and distance between their two main characters. It was a great match… and to my amazement, it was beautifully integrated into the narrative, helping to guide and drive the emotional narrative. When they ultimately reached out to me and we met, they were surprised that the work was not only made by a living artist, but by a young woman.

This painting has deep personal value. The image and its title, “alone together,” are autobiographical, as I use my work to process what occurs in my life and around me, and to recycle those feelings and thoughts through a visual medium. What was wonderful and surprising was the thousands of emails that poured in after the show aired. People tracked down the painting, found my website (which the tv station did not actually link to, even though my name appears in the show as the author of the painting), found my email, and wrote to me. I received so many heartfelt, personal responses from people whom the image had touched deeply— who interpreted its emotion in their own unique way, and through which they were able to have a deep experience or catharsis of their own. So many people shared their times of love, loss, connection, transformation. It was an honor. It made all of my years of lonely studio time feel profoundly worthwhile. 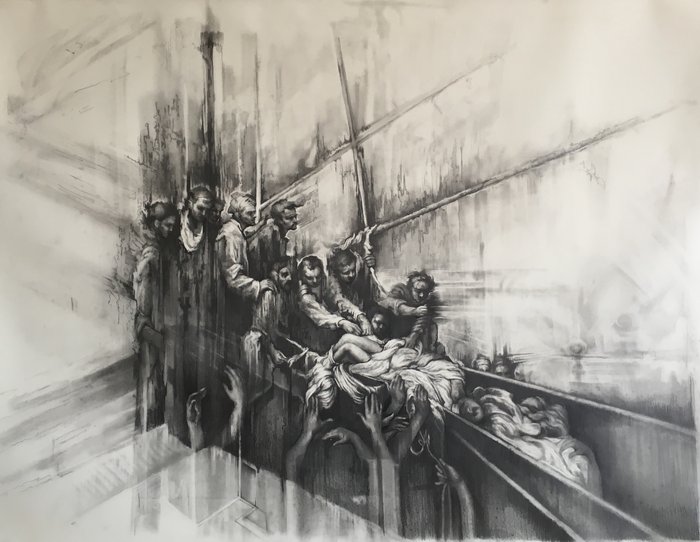 You’ve developed a wonderful signature painting style, tell us more about its progression and the process you undertake when creating a piece?

The bodies of work I have made are all experiments into a thought and emotion that cannot be fully spoken. (Otherwise I would simply write it.) My physical process is also often experimental. I spent a lot of time starting paintings in a messy way, just massing in and attempting to create relative order from relative chaos. In the very recent past, I’ve learned to become more methodical, more organized, and develop highly resolved underpaintings. What is consistent in my practice is layering. Figurative work has the potential to feel like magic. And I’ve noticed that often when creating emotive faces, the more I work into something, layer it, or glaze it, the more nuanced I can make it, as though its even moving slightly in front of you. The idea is always to make it feel alive—strong, but delicate—even if its a monochrome. 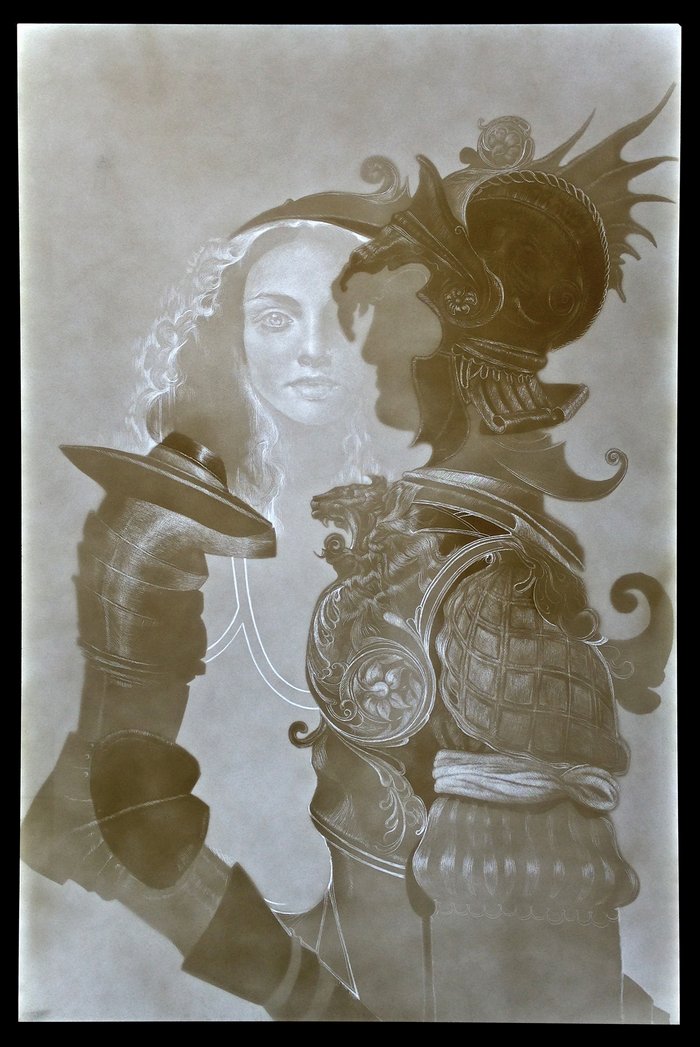 Your figurative works feature quite a lot of female subjects and you explore concepts of passion and isolation of the human condition within them, where did this exploration originate and what specific areas of it are you playing with in your most recent works?

I love painting women. To me, showing a scene with women feels even more private than one with men. And a lot of the work is about that: looking into a private moment, whether its a single subject or a group. Paying homage to classical form, these paintings highlight modern notions of female ambivalence: Particularly in a scene of romantic love, I’m pushing to accommodate uncertainty, fear, and doubt. This combination is deeply contemporary. The woman is in control, yet frightened. She is neither happy nor sad, but suspended in a liminal state of simultaneous strength and fragility. And its this contemporary psychological moment in-between that I want to capture, using a form and technique that makes the subject look and feel real.  Again, the emotion in the works is often autobiographical; its the way I process what happens to me and extrapolate backward as far as I can take it… so the woman in the image becomes every woman, the man every man. 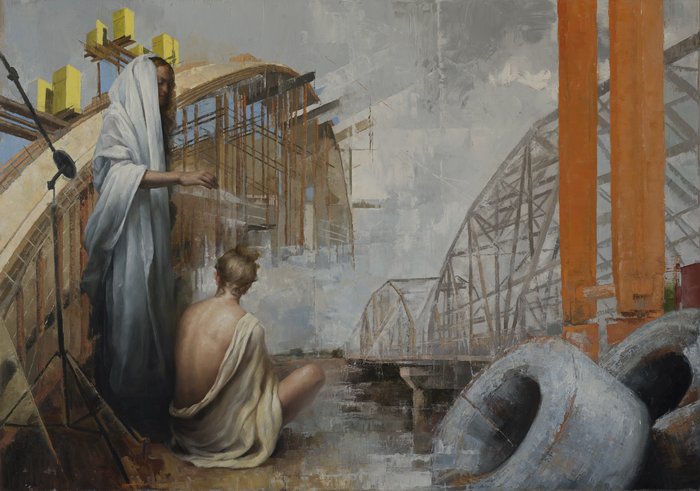 Some of your pieces are light boxes, tell us more about these. The choice of subject matter and how you go about creating them?

Painting is a medium which creates a sense of light but needs to still be lit to see it. The light box project began with the desire to make an image that was its own light source. After many daydreams, I suddenly came up with this idea of coating plexiglass and etching into it with a needle. The images wandered a bit into the mystical and surreal. They were meant to all be hung together, to feel like a sort of sanctuary space or altar. Whats beautiful about them is that every delicate mark is its own light source.

You’ve also created a large scale installation ‘chapel of dancing shadows’, its quite different to your other pieces. What prompted the change and how did if feel working on a more spatially diverse scale?

As a child I dreamt of being an architect. With this project, my aim was to create an immersive experience that transitioned from 2d images into 3d space. The installation itself was initially inspired by my childhood surrealist drawings. In October 2015 I decided to re-cultivate that “doodling” practice.  What began to emerge on paper was a stream-of-consciousness exploration, which quickly evolved into a stylistically consistent and intriguing world of its own. If you could take my actual creative impulse, isolate it, and see what that bedrock looks like on which I build all of my paintings, and even my thoughts… these drawings would be the closest thing to that bedrock. When I look at them personally, they bring to mind a strange and abstract creation myth. What you see in the installation is the beginning of a large, ongoing project of drawing and exploration.

Tangent to this, I have always been curious about the experiences people have inside temples, chapels, or so-called sacred spaces—about the sort of essential, common denominator features of those experiences. Loving the drawings so much, I felt like I was building them their own altar to live in. The first 12 plates of the series became the 8-foot walls of the installation. I designed the ceiling like a deconstructed Renaissance chapel, covering it with arabesque, laser cut designs. Standing inside, one might feel as though they were below a giant lace canopy.

It was a great first experiment. I loved the challenge, and I was truly stunned that I was able to pull it off at all, given the many moving parts to the process. As a painter, I’m used to taking a work from concept to completion in the privacy of my own studio. I’m not used to creating something so big that I can’t handle it myself, and this project required me to work with many people, particularly on fabrication and installation. It definitely pushed the boundaries of my skill set and experience, as the engineering required to transfer a small scale model to a safe piece of interactive architecture is non-trivial. Most rewarding was, as always, the experience of others. Human beings are so good at creating impromptu rituals and improvised ceremonies when given the chance. The installation was meant to invite them into their own personal, contemplative experience. Those who did, and who relayed the moment to me, truly made the work worthwhile. 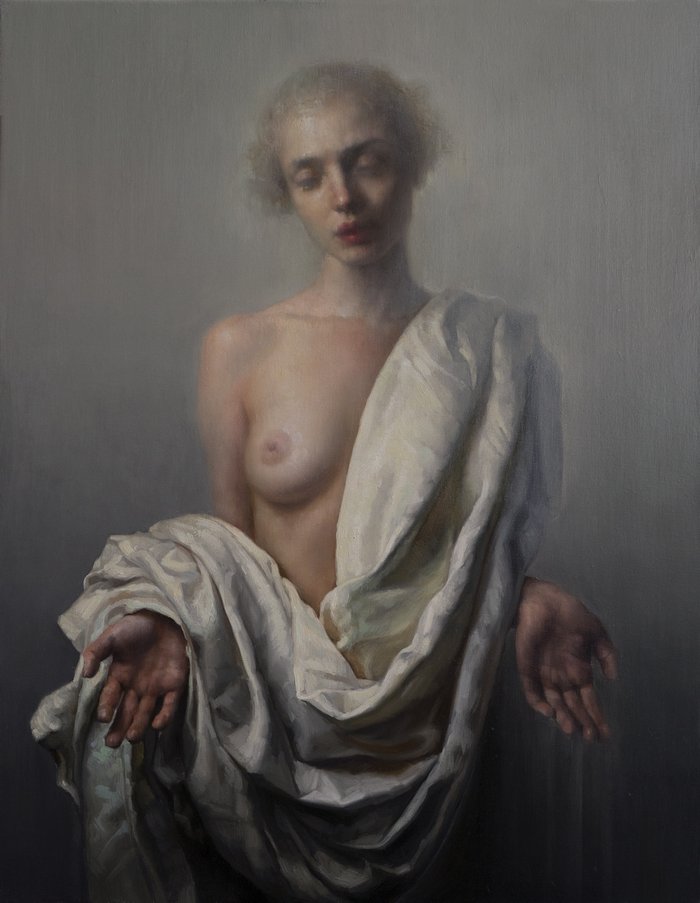