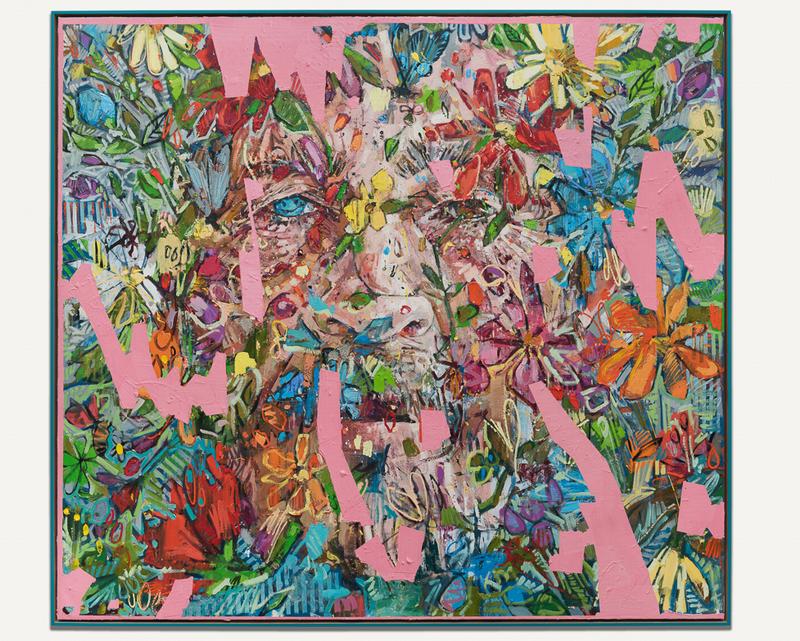 I like this question. I think it’s kind of strange, but very telling. It does dictate whom you become, doesn't it? Those formative years. I had a great group of kind, loving friends - many of whom I am still very close with to this day. But I was definitely one of the freaks and geeks. I always have been a bit odd; I think most artists would say that about themselves. We are also incredibly sensitive. I was obsessed with Tori Amos and spent my final year basically holed up in the art room, jamming out to Tori Amos albums. To Venus And Back came out my senior year. So like I am now, I was quite introverted but learned to be extroverted. I was actually valedictorian. I think my pals respected the fact that as a young closeted queer (I came out at 19), I wasn’t in any position to treat anyone else with anything but respect and kindness. I’m still very close to my high school art teacher, Donna. She probably changed the course of my life.

" I always have been a bit odd; I think most artists would say that about themselves. We are also incredibly sensitive. I was obsessed with Tori Amos and spent my final year basically holed up in the art room, jamming out to Tori Amos albums. "

2. In your opinion, what role do artists currently have in society? Do you believe Art can change the world ?

Well yes, absolutely. I was victimized by a homophobic hate-crime in 2008 when 8 men assaulted me and I lost my teeth. It was a turning point for me as a young man with dreams of being an artist: my work became my weapon. I still describe my work as drawing tangentially from that. An event like that shapes who you are as a human being…you can move on, you can heal, but it changes you forever. It makes you a better person. For me, it grounded me, gave me laser-sharp focus, and I am the person I am as a result of that incident. And certainly art has become the vehicle for that voice. I’m still political with my work, but I’ve grown up. I’m not an angry youth anymore, so I’m not such a flag-waver these days though I am actively involved in numerous LGBT charities and art is an amazing way to talk about political issues that interest me. My show The Misanthrope in 2012 was a turning point where I began to look at misanthropy in a broader sense. Not just internalizing it in such a solipsistic manner. Years later, in 2015, I did a body of work called This is Not the Way to Disneyland which were the words apparently spoken by the 13yr old victim of a group of men in the 80s who kidnapped, raped, tortured, and murdered young boys for years. A group of men. My art allows me to talk about these ideas in abstract ways and generate awareness. My gallerist, Kurt Beers made an observation recently: my 2015 show A Quiet Man was originally titled Youth in Revolt. But something changed, I found peace in my skin and the work reflects that maturation. But the themes are big themes; they’re just coded a bit more cleverly. My last show was The Fool… and after Bowie died I began thinking a lot about the passing of time, and loss, but its all wrapped in quite sugary paintings. I don’t need to take a hammer to a nail anymore, so to speak. I like to let people decode things for themselves. Just days ago, 49 people were murdered in a gay bar in Orlando. I can’t even speak about it without tearing up. The LGBT community has banded together like I have never seen before. Inevitably this will come up in my forthcoming show The Snake, and I’ve come up with what I think is a really touching and personal tribute to include in that show, which opens at Beers this November.

" I was victimized by a homophobic hate-crime in 2008 when 8 men assaulted me and I lost my teeth. It was a turning point for me as a young man with dreams of being an artist: my work became my weapon. I still describe my work as drawing tangentially from that. An event like that shapes who you are as a human being…you can move on, you can heal, but it changes you forever. "

3. You have been described as “one of the most promising young figurative painters at work today". To who or what do you attribute your success ?

I mean these are rhetorical statements in a sense. How can we quantify these things? But yes some people have called me that. I have had a lot of success if you consider that I’ve had 10 sell-out shows in a row since 2012. But there’s a giant onus that comes with that as well. There’s a guillotine floating above my head: I have to perform well. And there are certainly my detractors, but you’re never going to convince everyone. Nor do I want to. The best art always polarizes so if anything, my detractors prove that I’m doing something right. Love me or hate me, I always say, but never in-between. However, I’m incredibly hardworking. And I always strive to better my work. I have long said that mediocrity is not an option. Interpret that as you will, but I can also be my own worst enemy. I have to remember to acknowledge the little victories along the way. It’s easy to get trapped comparing yourself to others whom you perceive as doing better than you are. Art is competitive, and can be a really ugly world. It’s all politics and show business. I was recently at Art Basel and asked about a Peter Doig painting at 40x30cm…it was $650,000. No wonder I bought a small Doig print instead. Hah! Anyway, I’m doing fine. Can always improve. And am trying to do figurative work that is unlike anything we’ve ever seen. It’s important to stop and allow yourself to be happy with what you’ve accomplished. We probably all need to do that with our lives.

" The best art always polarizes so if anything, my detractors prove that I’m doing something right. Love me or hate me, I always say, but never in-between. "

4. How do you select a new subject to paint? What are some of the key things you look for that inspires you to paint them ?

People come in and out of my life randomly and things tend to evolve quite naturally. I tend to work with a subject that I really like for about a year…he can pop up in maybe 2 or 3 shows but then I like to find someone new. I’ve been painting the artist Sandro Kopp lately. He’s Tilda Swinton’s partner and an accomplished painter in his own right. There’s something serpentine and Romantic about his face that tells a big story… I’ve asked a few women to come in - the last show was all men. I think the girls get a better go this time round. But I hate being asked. And it is an absolute and emphatic no to commissioned work. I’m sorry if it sounds arrogant but no, I do not want to paint your daughter.

5. What materials do you work with ? Describe the process of creating a new piece.

I am pretty much an oil on canvas kind of guy. Sometimes linen. But things are changing. I use oil pastels and I’ve been hand-dying linen lately to play with and have been experimenting with sticking for some time. I get bored easily, and I often compare myself to a scientist tinkering about in a laboratory…I just go in and like to play and have fun. My process is always causal; one gesture informs the next and so on. I tend to have a mental map of things, but I rarely sketch because I like the process of exploration and accidents that occur through the process of creation. Often people ask me to describe my techniques and its a question that really stumps me…I mean, how long is a piece of string? I just go in and do. Sometimes things work, sometimes they end up in the rubbish bin.

" my process is always causal; one gesture informs the next and so on. I tend to have a mental map of things, but I rarely sketch because I like the process of exploration and accidents that occur through the process of creation."

6. How long have you been in London and what do you love most about London ?

I moved in 2008 do complete a Masters at Chelsea College of Art. Same old story: I became a victim to its clutches! I love the fact that I never feel like I fully understand London. The city surprises me, all the time. I live in Shoreditch and recently relocated my studio to London Fields. Broadway Market is what Shoreditch used to be, free, fun, youthful, artistic. I really love it there.

7. Name 3 artists you would like to be compared to ?

Well, my favorite living artist is Daniel Richter. That comparison would be just fine…albeit superlative. I just looked myself up on Artsy and it suggested Kim Dorland. That’s cool too. I know Kim and he’s a fellow Canadian with his own perspective and a solid career. I think he must be about 10 years older than me? I’ll show with his longtime representation Angell Gallery in Toronto in 2017. But when I grow up I want to be Tal R. That would be the best.

8. What are you currently fascinated by and how does it feed into your work ?

Ah, I just love music. This new Radiohead album is all sorts of wonderful. My forthcoming show The Snake is about shedding your skin because I think I’m sensing a momentous change of direction. But I’m looking at the Laocoön as a source of inspiration. Ideas of classicism and philosophy, religion and literature. Even sexuality. This concept of the snake is very broad, so I have room to explore and surprise myself. I was recently in Mexico (I’m actually half-Mexican) and started learning about all the Aztec and Mayan sacrifices, all to worship a god who would ride on a chariot of snakes. Oh man, these ideas are so salacious, so darkly twisted and sexual! I love shit like that. But one door opens another, and as an artist I have to be flexible to swim where the water runs, you know?