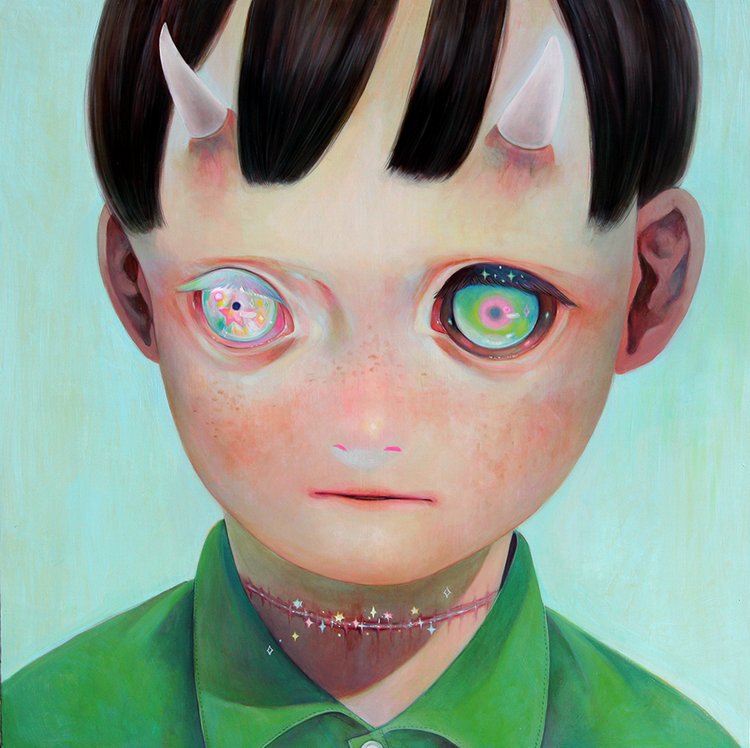 1. Hikari, has you upbringing in Nagano influenced your work in any way? If yes, how ?

I don’t feel like my upbringing in Nagano has had a direct influence on me, but I do think it helps me in terms of my work flow. Since Nagano is located in the countryside, there is a lot of nature around me; it’s quiet and there is plenty of fresh air. On the contrary, there’s nothing around here that is really modern, or especially “bright", and I think that fuels my imagination about surrealistic things.

2. How important is a higher education in the arts for any aspiring artist today? What do you feel a prestigious institution such as the Kyoto Saga University has given you ?

To be honest, I am skeptical of the education system of art schools in Japan. Now, it seems like things are changing, little by little - but as a whole, Japan has many art schools, especially for painting, that focus more on the fundamentals of art and less on discussions about how students can become active members of their creative community.

" There are many young, aspiring artists who are eager to learn, but they must make their own observations outside of the school system in order to grow.  "

So, a lot of the “educating” is not occurring inside the school.

As for me, I studied painting for two years at Kyoto Saga University of Arts. Looking back, I thought my painting was terrible at first, and even though I did not learn how to paint in the way that I do now (that came much later, with hard work) it was a very meaningful two years for me.

3. What elements of Japanese pop culture inspires you the most ?

This is a hard question to answer because my paintings feature a complex web of motifs. Lots of things inspire me, like anime and manga, which are products of the human imagination;

" I guess I could describe my art as the “imagination of the human imagination”. "

In particular, I am strongly influenced by Hayao Miyazaki, and how his stories express a love and despair for the world.

4. What are some of the social issues and struggles you explore in your work ?

I try to reflect modern issues in society in my work as a whole. Light and dark, hope and despair, war and peace, has all been incorporated into a combination of cute and scary, and the expression depends entirely on the viewer. Just as we all have our own impressions of the world around us, I hope my viewers can take their own personal meaning from looking at my work. In Japan, there is a general social anxiety that comes from a long-term economic recession, and the recent nuclear accident in Fukushima. I adopted my own impressions of this “anxiety” into my work after the accident ocurred, such as in images of the death of the human race.

5. Why have you decided to use children as the motifs to explore these complexities ?

" Things like age, identity, personality, and gender are ambigious in young children, and I believe these can be expressed without being bound to the traditional image of a “human being”. "

Also, I am not necessarily depicting real “children”- these characters are more like a vessel for my narrative and emotions.

6. How would you describe your personality as an artist ?

I try to challenge myself with every new work that I create. I prefer to take my time planning things out, and paint on a single piece over time - rather than paint multiple pieces at a time.

7. You have received plenty of interest from the global gallery scene. Where in the world have you had the most positive reception ?

It’s hard to compare level of acceptance between countries, but there’s certainly been a strong reaction in the US, and Los Angeles in particular. I think this may be because Los Angeles is where I made my debut, and I exhibit with Lowbrow Art and Pop Surrealism artists, which are styles born in that city.

8. To what do you attribute your success as an artist ?

I don’t think of myself as “successful”, but I think any success is a result of continous trial and error. In my case, I have always tried to paint things that are interesting to me, but that others might be interested in too; whether it be influenced by what is going on in society, or by a popular anime movie, or manga. So I think those elements give something for a viewer to “latch onto”, and I continue to due my best to engage anyone who is looking at my art.