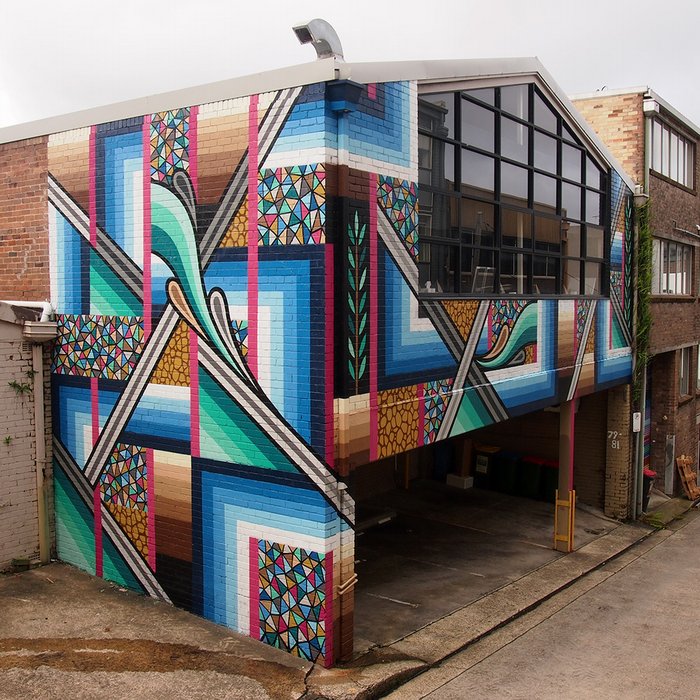 I honestly have no idea what initially inspired me to start making art, I just always remember drawing. As a kid i loved drawing and then as a teenager I loved messing around with painting, collage, design, photography, video cameras and anything else I could get my hands on. I became heavily involved in skateboarding culture in the 90s which was very encouraging and accepting of my creativity, individuality, experimentation and visual thinking. This early exposure to other like minded and creative people spawned my appetite to continue making art and try new mediums. Slowly over the last 20 years, my artwork changed from being very free and random, to becoming a very distinct and refined visual language. The work evolves itself over time, as long as I continue making, the artwork moves into new styles, mediums, themes, sizes, genres and colour palettes. I'm always trying to visually interpret the future, trying to create unique imagery. 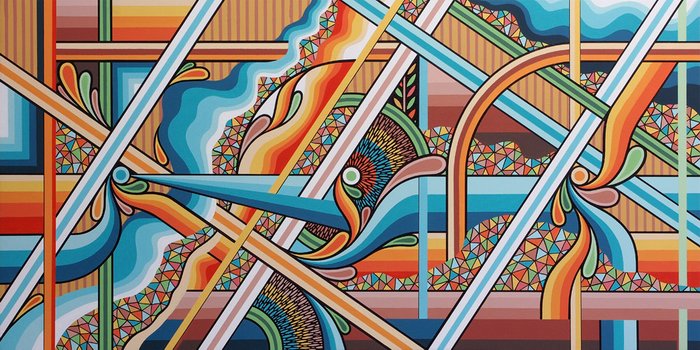 2. Your practice is influenced by natures organic shapes much like the works of pioneering land artists such as Robert Smithson, would you say your work has been influenced by them or could be considered a part of the land art family in 2D form?

I have always been generally amazed by nature and have always drawn from nature for inspiration. I have never been exposed to or influenced by land artists, in my early years I was more inspired by artists I was introduced to through skateboarding culture, artists presenting a more stylised and designed approach which was more in line with how I also liked to draw and paint. Some of these artists were Don Pendleton, Ed Templeton, Andy Jenkins, Evan Hecox, Doze Green and more. I enjoy the process of reinterpreting nature in my own way, and in turn maybe attempting to portray the future of nature in a time of extreme human intervention. I still am unsure what art genre my work belongs in, it is what it is, spanning various mediums and genres. Almost all of my artworks could be considered landscape paintings, they are inspired by the land, and seem to create their own environments. 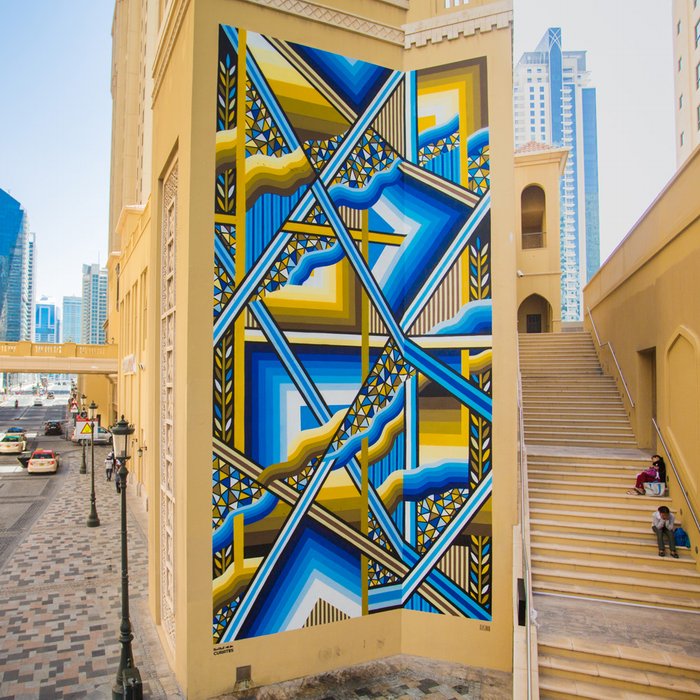 3. For those like myself with only a superficial knowledge of Australian Aboriginal Art some might see influences of it in your works, in the colours and shapes? Is this so and if so where did your interest in Aboriginal art begin?

I have always been aware of and fascinated by indigenous art, not just from Australia but from all over the world, but I have never really been influenced by it when making my own artwork. I am trying to present a unique, modern and futuristic portrayal of the natural world, and human interaction with nature. I think my works use more enhanced colour palettes and are far too complex, measured and precise to be closely compared to aboriginal artworks. 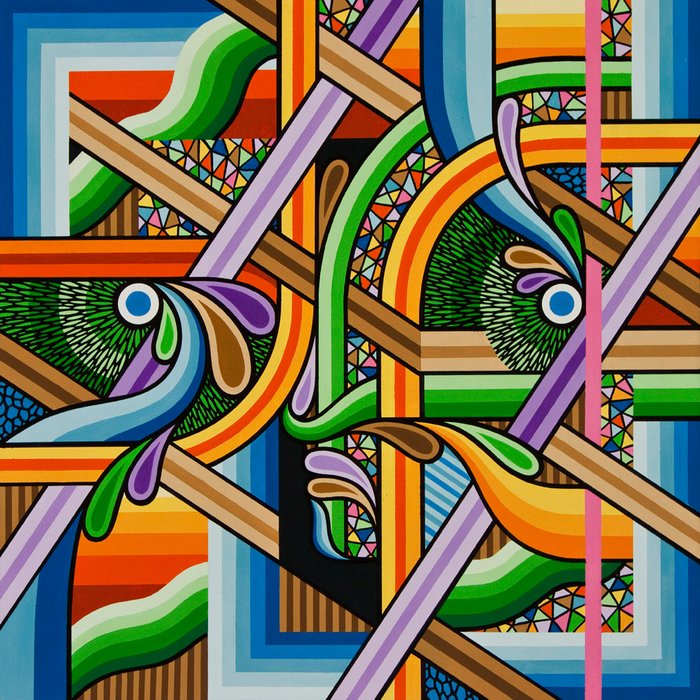 4. Your paintings and murals explore ideas around potential species and landscapes evolution, would you consider them dystopic (undesirable frightening) or eutopic (normal)?

I’m recently exploring the theme of human intervention, and what nature might become in the future, through compositions that either balance or clash organic and living elements with geometric ones. I don’t think I am necessarily portraying a reality, but more just abstracted ideas of what could be, and in turn maybe having the viewer think differently about their future interactions with their natural landscapes. 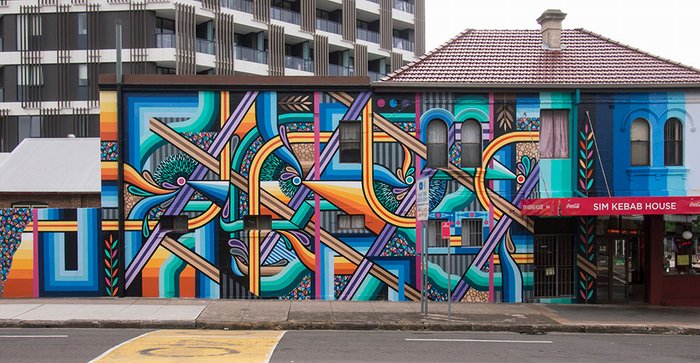 5. Do you have particular locations or creatures that inspire your works more so?

I tend to lean more toward coastal environments in the works, I guess due to my current location in Bali, and also because these are locations that tend to generate more contrasted relationships and drastic changes between the different elements of nature. The life forms injected into the works are either human in form, to represent the human presence, or they are a unique life form unlike any other, as nature is going to continue to recreate itself into the future. 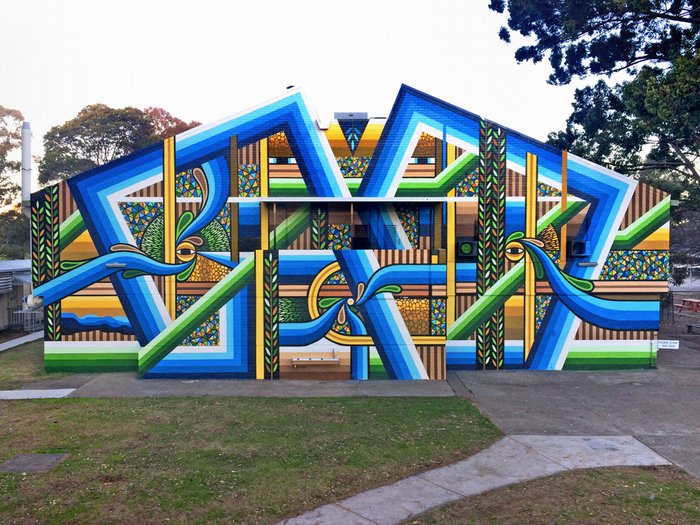 6. The use of colour in your works is quite varied, but each piece tends to have its own micro palette. Are the colours you use a method of symbolism, and how do you make decisions about the colours during the creation process?

I tend to either create works in a full colour palette which I have developed over many years, adding more colours to it as I move into different levels of detail, complexity and balance in the works. Or I create works in a much more reduced palette, usually to have the work interact with and belong in its surroundings, especially when painting murals or doing commercial projects. I love working with all colours, but over the years the palette I am most known for is definitely derived from nature, with each colour spectrum representing different elements of nature and their potential origins. A lot can be suggested by colour, so sometimes its great to create works without any colour, just to try experiment new things and ideas. I always draw sketches in black and white, to develop composition, before colours even come into the equation of the artwork.

7. You’ve done some really wonderful Murals, take us through the process of creating them and how it differs to your singular paintings?

Most of the murals I paint are a combination of acrylic and aerosol paints. I usually prefer to work with the architecture of the building I am painting, and alter my colour palette slightly to suit the location and surrounding buildings or surfaces etc. The process would usually involve a small simple sketch just to solidify the composition, and then I just start painting using a grid system. I like to have elements repeat and be measured, so by starting with a grid on the surface I can achieve precision in measurement and placement. Sometimes I paint murals based on a smaller paintings I have already done, and other times if the canvas is unique I will design something new to work with the features of the building. The murals are essentially the same body of artwork I am making across all mediums, the difference is obviously the scale and mediums used to create the work. I enjoy making artworks in lots of mediums including acrylic & ink on board, aerosol murals, digital illustration, animation, print making and of course just simple pen and paper. Although the mural works actually give me more freedom to experiment with new ideas and try new things, as the large wall canvases are much more forgiving and aerosol paint is great for layering paint quickly, so you can try things and then easily just paint over them if you want to change anything. Such a fun medium to work with on a large scale. 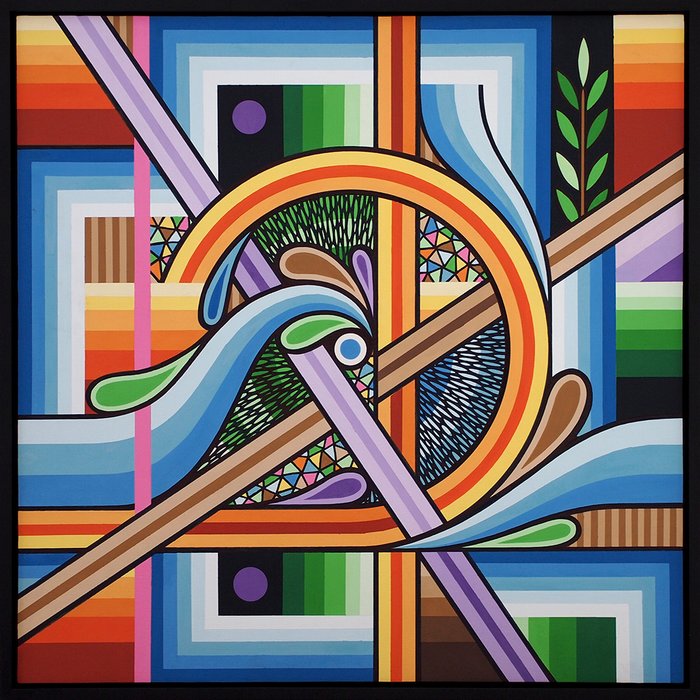 CHECK OUT www.beastman.com.au FOR MORE DETAILS