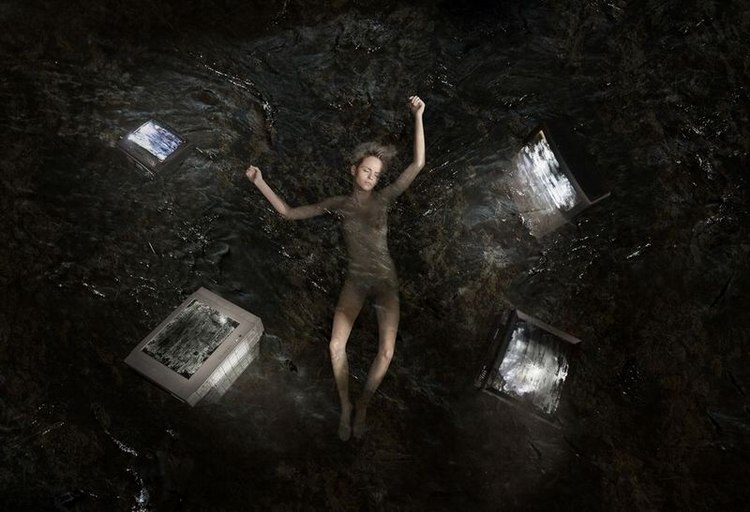 1. Anna, tell us a little bit about your background. What got you started in photography?

I was born in Moscow and I lived there until I was 22. Before I moved to London to study art, I graduated from the Financial University under the Government of Russian Federation with a specialist degree in International Economics. That sounds pretty serious! I really hated it, if I’m honest. Unfortunately, there’s still a strong belief in many Russian families – even progressive ones – that you should have a “real profession” just in case. There’s this idea that: “you never know what life throws at you, so you should be prepared to be a bread winner”.

" If you are reading this and are doing something you hate, please give it up and don't wait like I did! "

I started to do photography as a hobby when I was 17. My mum was always taking pictures of our family, nature and other things she took a liking to, and put the images together in photo albums, writing captions and little stories for each page. I think at the  time I didn’t appreciate what she was doing because I was a very rebellious kid and wanted to do everything differently. I was often skipping classes at university to hang out with my friends in AD&D clubs and one day when there was nothing on, and I wasn't sure what to do, I took my mum's small digital camera. She never used it, as she preferred analog.

" I took the camera along with me on a walk with my boyfriend at the time and, well, fell in love. Not with the guy, but with the process of creating images! Up until that point I never realized, that I could CREATE with a camera. "

I always viewed photography as a means of documenting – and I couldn't be interested in anything less. But then, I realised that I could ask a person in front of the lens to pose for me, or to think of something specific to project the emotions I wanted to show. It was a way of not simply documenting something that was already happening, but rather MAKING it happen. This gave me an unforgettable feeling of power – I had discovered my creative potential and an outlet for freedom of expression.

2) As a member of the new breed of Russian artists using London as their creative space, has studying and working in London influenced your work in anyway? Do you feel there are elements of your Russian upbringing in your photography and installations?

200%! I have enough to say on this topic that it could probably exist as a full article by itself! But in a nutshell, there is a big difference between the Russian perception of beauty (and Eastern European as a whole to be honest) and the way the West deals with aesthetics. Of course I'm generalizing and there are exemptions, but there’s significant evidence to support the point.

" In Russia, many photographers strive to create a “perfect” image – they want everything to be beautiful and ideal. In Europe and in London in particular, I see a completely different vision. It’s more of an “ugly beauty”, if that makes sense. There’s this need for an imperfect element, because perfection is super boring. "

This approach has influenced me a lot. I’ve started to collaborate with “unusual” models (at least what I would consider unusual!). I’ve worked with models aged 70+ and I’ve found myself saying “nothing too pretty please” to make-up artists. I’ve also tried to overcome this longing for a “pretty pose”.

However, there are of course influences derived from my Russian background that I absolutely love. There’s a passion for rich colors, theatricality and the extensive use of set design. There’s also a constant need to incorporate deeper meanings – we love a good drama and to explore the concept of an existential crisis.

3. If you could describe your work, whether that be your style or overall theme, what would that description be?

A visually arresting mixture of surrealism, fantasy and contemporary reality.

4. Where do you find most of your inspiration? What advice would you give to someone lacking in the ability to develop such interesting ideas and discover their inner creativity?

I know a lot of people say this, but inspiration is everywhere – especially once you’ve  found a theme that you find really important. As soon as you have that theme in your mind, everything you see, hear and experience on a day-to-day basis starts to evoke all sorts of associations with that theme. Of course there’s a way to boost this process. Make sure to attend thought provoking event – visit places that will offer you new experiences and triggers for your brain. Whether that’s art galleries or music concerts, scientific talks or poetry evenings.

Another important thing is allowing your brain to wonder and to daydream. Nowadays we don't do that because of our smart phones – it’s harder to lapse into boredom. Even when standing in the queue or waiting for a bus – we always distract ourselves with social media or games or something else. So I would say learn to manage your use of technology and allow time for your brain to wonder. Some of the best ideas will come to you when you are very bored! What works best for me is going to an opera (I'm not a very big fan), I get really bored there, and I have to sit and stay till the end. Then I have an amazing couple of hours simply brainstorming.

" Remember that creativity is a muscle and you have to train it. "

Create moodboards (use Pinterest, its amazing!), read texts with a lot of metaphors (poetry is great for that) and try to find connections with your theme, talk to other people about your theme and ask them to give their opinion and ideas – just try, try, try!

5. In your opinion, which is your most powerful image and why?

It’s super difficult to judge your own work...I think the most powerful image I’ve created is the one that has influenced the most people thus far. It would therefore probably have to be the one with a fat lady with a sandwich and a ballerina girl. I received dozens of emails from people telling me rather sad stories about their parents trying to achieve self-realization through them, as their kids.

6. You have also ventured into Fashion Film. What can Fashion Film do for Fashion that other media forms can’t?

Fashion designers don't create their collections and outfits in order for them to be still – they are created to be seen and experienced in movement.

" That’s why fashion films are so powerful: they provide an opportunity to see the garments moving. There are also amazing possibilities for creativity and storytelling, which are limited within a still image. "

I also believe that as image-makers we need to the push boundaries of traditional media, and photography is a very traditional format within fashion. It is most likely just a matter of time before still image disappears completely to give way to new and innovative forms of moving image.

7. What has been the most memorable moment in your career so far?

The opening of my first solo show last year, in which I invested a hell of a lot of sweat and tears!

8. Tell us about your upcoming projects and show?

I'm really into mixed media art now, so my next project will be a mixture of photography, collage and animation – I’m very excited about it! In regards to shows, the next one will be a group exhibition with some great artists at the end of August in Mykonos, Greece. Come over if you are around!