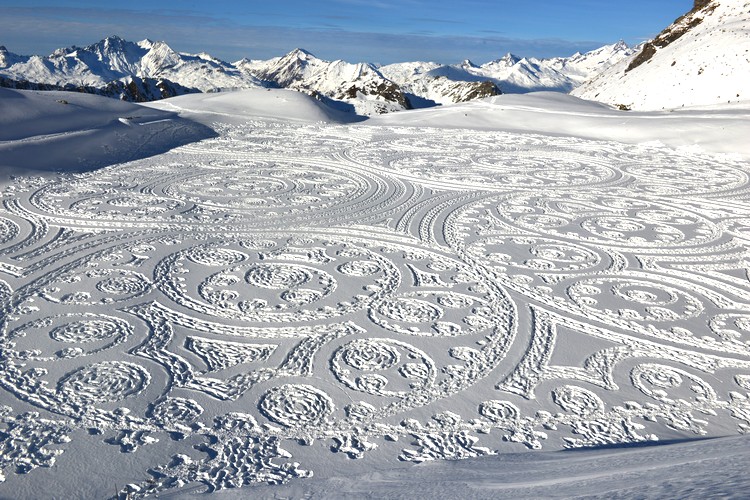 1. Simon, you have an educational background in Engineering and spent most of your life as a freelance orienteering map maker. Could you ever imagine you would be considered an “artist” before you begun the SNOW ART project ?

In a word, no! It all just started as a bit of fun, and it wasn't until over 4 years after I made my first, that I decided to "take it seriously" and make it my primary form of physical activity during the winter.

2. What initially gave you the idea to create such stunning wintery creations? What was the first one you ever did ?

I wish I could find a photo of it  (there is one somewhere on the internet).  It was a simple 5 pointed star with balloon shaped shaded areas added to use up the space between the points of the star.

3. Do describe the process and what the most difficult part of creating these installations is ?

The first stage is to establish the main lines through a drawing with careful compass bearings and measuring along them using pace counting. This requires thought to avoid small errors that could add up to larger ones.

" The easiest and the best designs are created by working your way out from a central point. "

Next, secondary lines are drawn, linking together points that are measured along the primary lines. Finally the shaded areas are added.

4. In which part of the world was your most memorable SNOW ART experience. Why ?

Quite honestly, the one for Corona in Argentina a year ago.

" We were so relieved to get a result after a week of bad weather and the location itself, which was a large lake at the bottom of an active volcano with steam coming out of it."

5. Given that such works of art are ephemeral, is it not sad to know that they will not stay there forever after so many hours of intense work ?

Now that we have photography, they are never gone! And when you say so many hours....  well I have some copies of the "environmental art calendar" containing 12 ephemeral works including one of mine, I would guess mine took the least amount of time to create. Besides, one would soon run out of locations to make drawings if they stayed forever. The Nasca lines is an example of what it would be like if they did not get destroyed.

6. You have also worked in sand. Do you prefer sand or snow? Which one has more favorable properties for what you do ?

Snow is better, because the end result is better and there is more time to create it. But it is nice to work on the beach where one doesn’t get freezing cold if one takes more than the briefest of rests or stops to eat.

7. You almost always draw mathematical patterns. In your opinion, how would you describe the relationship between art and mathematics in general ?

Many natural creations such as crystals and plants grow according to simple rules, and humans think they are beautiful, but some people seem to think that it all comes down to mathematics and not art therefore they are not included in art galleries.

" I am unhappy with the choice of artworks that galleries see fit to allow the public to see, I would like to get rid of a lot of the junk that art galleries display and replace it with the sort of stuff I do. "

For one thing, it would encourage more people to create beautiful things for everyone to enjoy.

8. Is there anywhere else in the world you wish to travel in order to create your next large-scale artwork ?

I have a long wish list, although a lot of the locations would be impossible for one of several possible reasons. One of the lakes near the Towers of Paine would be great; the main lakes probably never freeze but perhaps a smaller shallow lake might, but I would expect it is too windy most of the time.