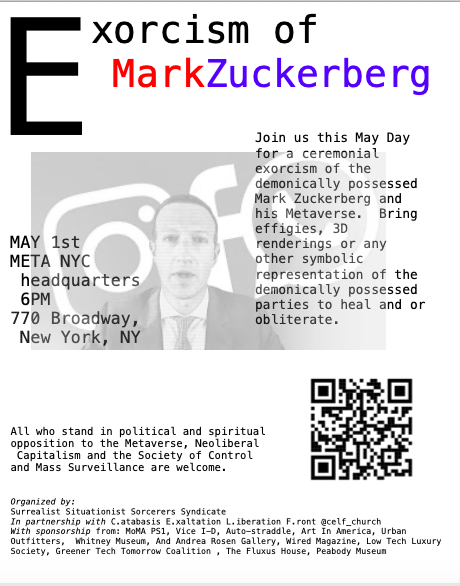 Have you ever felt that social media was controlling you in such a way that it actually felt like a demonic entity who was sucking your soul, transforming who you are, draining you of your spirit and controlling how you thought, behaved and what you did? Have you ever seen what happens on the internet and its world wide effects and thought - yes-this indeed is hell? If you answered yes to those questions- I am certain you have never thought “ Gee- you know what sounds divine, heavenly even? A totally immersive world designs by Mark Zuckerberg.”

If these are thoughts going through your head your in luck- as  some of the art world’s most notorious faces in performance art will go incognito under the ominous collective name of The Syndicate, to perform an “Exorcism” of a Mark Zuckerberg puppet and by proxy- his Metaverse this Sunday May 1st outside of the Meta headquarters in Manhattan. Sponsored by MoMa PS1, Vice-ID and other groups critical of the Metaverse- The Syndicate will draw out the demonic affect of  our neoliberal techno feudal lords nd banish them through a ritual exorcism. They will be   dawning  handmade “priestly” gowns crafted by local designers, incorporating sculptures from members of the Solo.Show community, and work with an actually ordained minister to craft their DIY religious rite of spiritual liberation of Zuck.

Over a speaker, will play the haunting sermon explaining the ways in which the Metaverse truly is a layer of hell within capitalist society.  This idea is influenced by spirituality but also by writers like Walter Benjamin who theorized around capitalism itself being a religious cult. The Syndicates “religion” is more of a metaphysics meets mysticism meets political theory, inspired  by Fluxus, the Situationists, Elsa Von Freytag Loringhven, and contemporary wild performers meet theorists meet activists.

The public will be invited to interact with the group to help draw the “demons” out of  the Zuckerberg puppet through playful, spontaneous ritual acts, with their goal to create more community that defies the cults of personality and ego and social capitalism within the art world that are a symptom of the “demonic” impacts of a controlled surveillance capitalist society.

The action is meant to honor more deeply the power of spontaneous, playful and surreal actions that can heal our isolation and help connect us in ways that make life worth living….like avant garde public ritual theater that banishes the demon of Mark Zuckerberg and any reality he could design and force us all into…which would obviously be hell if anything is!.

The performance was created in tandem with a non-profit called The C.E.L.F. They are a group of artists, religious practitioners and charity workers who unite across different faith’s to  create opportunities for disadvantaged, disabled, domestic violence survivors and houseless people through art based employment and experiences that can brighten their lives through experimentation, open mindedness and caring community.  For their group- they say the rise in Meta-centered economy and lifestyle will further isolate those who are trying to heal  and integrate back into the community- and that for them- it is clear that the creation of an alternate reality that we are manipulated to participate in is spiritually ominous on multiple levels.

MoMa PS1 is glad to sponsor the Syndicate and the CELF. Admission is free to attend and starts at 6 pm.

We are a group of concerned citizens of faith,of action and faith- within various creative professions and religious communities who sense that something spiritually sinister is afoot. Unifying us is the ever lasting life of the memories of light, and the waves complex arrays as poetic union with non dual sacred and profane- the world within the swirling of lines of flight. We seek to invert the curses through an exposure of the transparent blasphemy of the gods of sinister banality, of course evil would indeed be boring. We take then an effigie we breath light and its rhythmic partner shadow into its limpness, its eyes. We carefully strew our our implements, bricks perhaps or worse. We violently assault the one who names himself innocent in the casual dress of a grocery store clerk

Other events from MoMa PS1