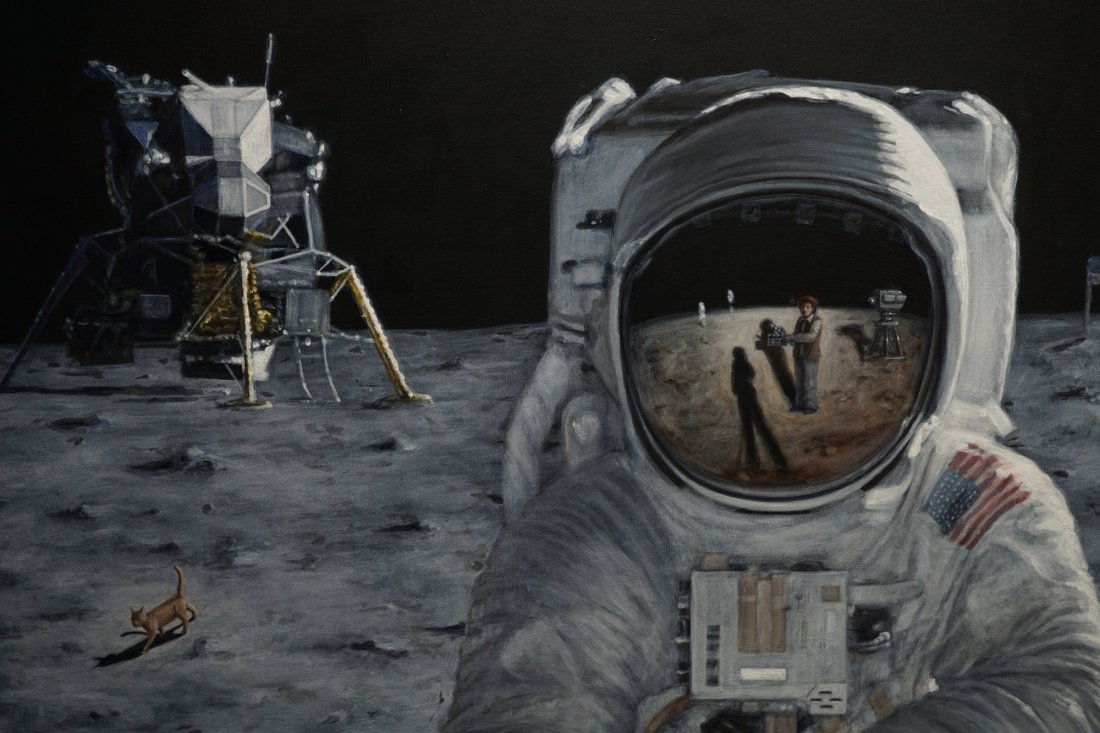 Mirus Gallery is pleased to present the NoMe Edonna first exhibition with the gallery, titled “CON:THEORY”.  The opening reception will be Friday August 16, 7-10 pm and the exhibition is free and open to the public for viewing through September 7th.

The term, ‘Conspiracy Theory’ has become a significant meme in our contemporary culture. The idea that there are people or forces, ‘Up on high’ or hidden behind the scenes, controlling the world and keeping the masses in the dark about what is really going on, is no longer a fringe subject. The rise of events happening throughout the world, which lack an honest, transparent explanation, have, in turn given rise to a growing community who are realizing there’s often much more to the, ‘Official’ stories presented to us by the mainstream media.  Most will find, with an open mind and a small amount of research, that there are gaping holes in the official reports on subjects such as; the JFK Assassination, 9/11 and government interest and knowledge of UFOs. The more information uncovered by researchers, the more we see a backlash of distraction, spin and misinformation unleashed by the mass media. In fact the term, ‘Conspiracy theorist’ was popularized by the C.I.A. in the 1960’s, after a surge of public distrust in the official Warren Report findings. In turn, the term has become a label of ridicule and discredit for anyone embracing a skeptical viewpoint, seeking the facts about events to which the official reports seem unreliable and misleading.

Questions quickly arise as to how, why and by whom such conspiracies could be carried out. A lack of what some consider credible, verifiable evidence is often the point of contention in such matters. Some see this lack of reliable information as being a fundamental facet, in the effectiveness of such conspiracies being carried out and kept from public knowledge.  Most of our beliefs and opinions are based on the information we have about a particular subject. Unfortunately, it’s often difficult to trace the information back to its origin and whether or not it is factual, biased or just plain false. To make matters even more unclear, there is the tendency in many people to believe things simply because they want to, based on faith and fancy alone, regardless of the information available. This, of course leads to a world in which anything goes, personal theories become dogma and social divisions abound.

The search for truth and the meaning of life is a fundamental human quest. The predominant answers to such questions are often fed to us, in the forms of religion, corporate-sponsored science, and government authority. However, the light shed by independent institutional analysis, often reveals these to be the very sources of the conspiracies themselves. From this point of view, the history we’ve been taught, the news we see and read each day, the unnecessary products we’re subliminally coerced to buy, the manufactured celebrities were encouraged to idolize; could all be viewed as cogs in some grand mechanism which keeps the majority of the population in a constant state of blind, entertained complacency and cyclical consumerism. A giant CON-game, played out on the masses of humanity for the benefit and safety of a few.

The works in this show reflect some of the most prevalent conspiratorial questions and ideas, now residing in our greater collective consciousness. Through various approaches and styles, these works attempt to bring a light of curiosity, intrigue and possible humor to the viewer - yet in no way attempt to make any solid judgments or final verdicts.

This, of course, is up to you…

This is his first solo exhibition with Mirus Gallery.  He has participated in various group shows, as well as live paintings as member of the Furtherrr Collective.  NoMe’s work has been shown at worldwide, from street to museum and has been featured in numerous print and web publications. He’s held artist residencies at the San Francisco dump as well as at S.F.’s School Of The Arts high school.

NoMe Edonna is a self-taught artist from California, working primarily in the fields of painting and drawing. Techniques and styles rooted in Dada/Surrealism, Art Nouveau, Symbolism and ‘Graffiti’ Art, are visually prevalent yet re-contextualized addressing contemporary issues.  In recent years, his work has become increasingly focused on social, political and environmental concerns as well as inquiries of science, technology and study of ancient civilizations.