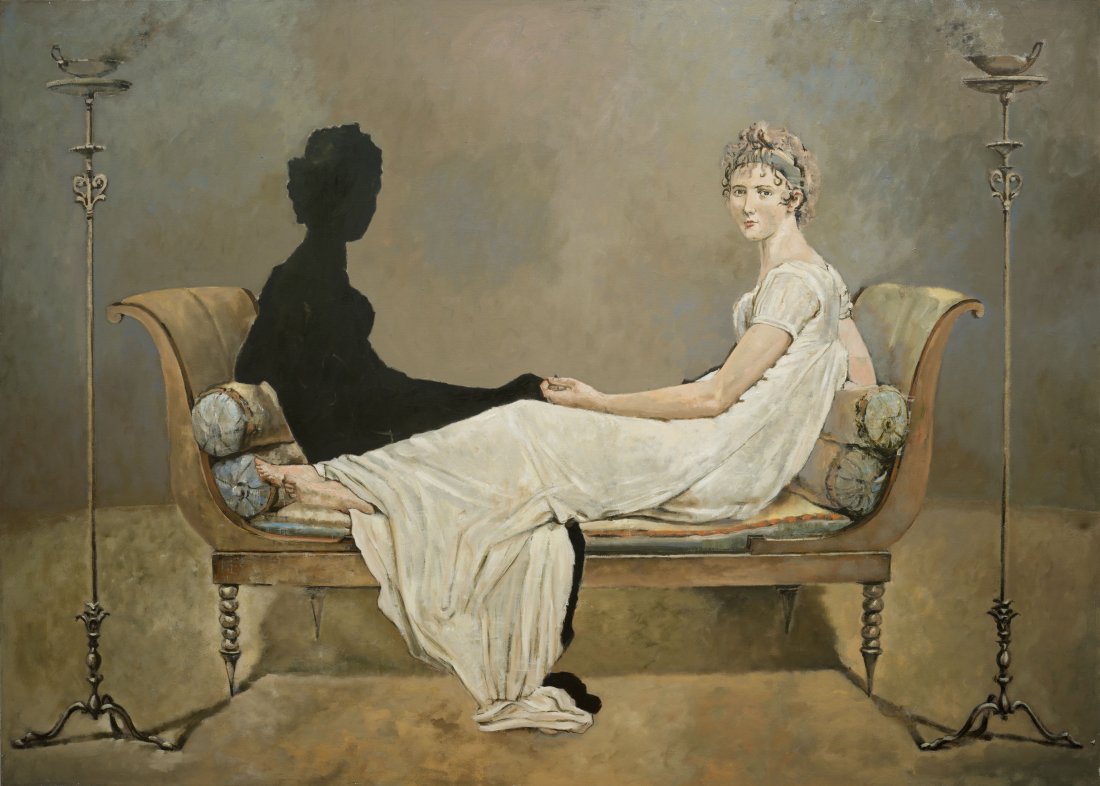 Typically depicting buildings from famous cities, delicate nudes, or relating to Greek stories, this show diverges from Pietropoli’s norm, revisiting his favorite paintings from Ingres, Vermeer, Picasso, Rembrandt, and started visiting painter’s studios-- introducing some reminiscences from the cultural past. When asked about this shift, Pietropoli explained that he always worked on cultural citations, but when asked to do this show, he had in mind something, of course, different, but on the same path. Wanting to get away for a while from cityscapes and architecture, he revisited his favorite paintings from Ingres, Vermeer, Picasso, Rembrandt and started playing with portraits and these painters’ studios in an unconventional way.  This is how “La Baigneuse” was born: he placed “La Baigneuse de Valpincon” of Ingres in Anders Zorn’s studio. Similarly, “Vermeer at Work” was relocated into David Lynch’s studio.”

His personal studio was also included in these works. Pietropoli says he initially didn’t expect for his studio to be a part of this show—working on Picasso’s studio, for example, he couldn’t change the set so much, having to respect what made the studio a special and unique place. Working with his own studio, Pietropoli says he found an easy way to work on the set, physically speaking. “La Favorite” was the starting point; it opened a new path where painting is reduced to a preparatory work. In this set, he could introduce his characters and to play with them by deconstructing and reconstructing them. This process gave birth to a brand-new collection of digital prints.

When asked how he reconciles his new print collection and his work as a painter, Pietropoli responded:

“Firstly, they belong to the same spirit and the same theme. Secondly, they complement each other: the prints give my reconstructed figures some realistic presence that I couldn’t expect to achieve so sharply by painting.”

Patrick Pietropoli is a French painter born in Paris in 1953. After Sciences Po Paris and Master’s degree in Ancient History, he taught history for six years before fully devoting himself to sculpture and painting. This passion started in early childhood and developed through various experiments with fine arts techniques into a life-long commitment. He was a teacher of political studies for several years before becoming a professional artist. Trained as both a painter and a sculptor, his oil on linen paintings have both an antique feel and a very contemporary freeness.