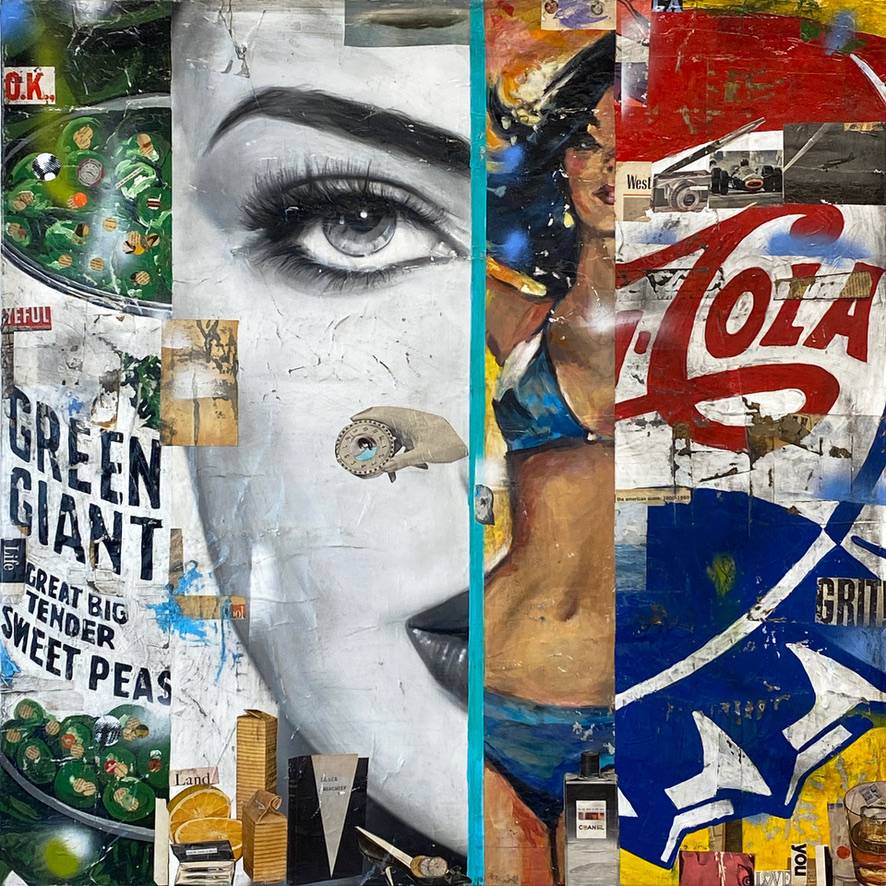 On the occasion of William Turner Gallery’s thirtieth anniversary, it is with great pleasure to conclude the observance with the gallery’s inaugural artist, Greg Miller by presenting “FLASHBACKS.”

Contextually within the framework of postmodern Neo-pop and Post-pop, Miller utilizes a semiotic process of mining familiar pictorial codes from the popular culture of his youth for his visual vocabulary. Through his examination of sign systems, the modality of their transmission, as well as methods of production, Miller constructs paradoxes of the collective appointments awarded to the conventional iconography of post-war America. Informed by a uniquely ‘California’ lens, his gaze assembles a complex of interwoven images and text, high and low culture, with allegorical references to labor, leisure and Capitalism in medium and process.

With “FLASHBACKS,” Miller binarily indexes the polemics of “universal literacy,” while considering the problematic nuances of cultural relativism. Parsing his canvases is to unpack ethnographic maps which not only survey the landscape of industrialized Americana, but additionally addresses the global reach of what some have interpreted as cultural imperialism, others as soft diplomacy. Richly laced with irony and humor, Miller exploits the spectacle and banality of mass culture in an eclectic pastiche void of overt social commentary.

Miller’s investigation of materials associated with Venice, California’s surf, car and graffiti cultures introduced mediums and techniques he continues to incorporate. In his strategies involving the appropriated image, Miller paints and airbrushes rendered quotations of cowboys and glamazons amidst an assemblage of photographs and text from newspapers and magazines. The overlapping layers of archived prints are accretively assembled and embalmed as inclusions below a capsule of crystalline resin. Beginning in the 1940’s, “Glassing” surfboards with resin became a process of waterproofing and finishing employed by Southern California’s professional surfboard shapers and appropriated by Miller.

Cultural relativism applies not only to geographic boundaries but generational and economic intersectionalities. “FLASHBACKS” canvases afford materials new lives in a transformative process of negotiating the radically shifting cultural constructs of contemporary social mores and re-contextualizes them, provoking questions on our relationship with the images we consume.

Greg Miller was born in 1951 in Sacramento, California. His work is featured in numerous museum and private collections, including those of the Frederick R. Weisman Foundation and Charles Saatchi Foundation. The Get Go, a volume of his writings, photography and paintings, was published in 2010, and the first comprehensive monograph on the artist, Signs of the Nearly Actual, was published in 2009.

Other events from William Turner Gallery