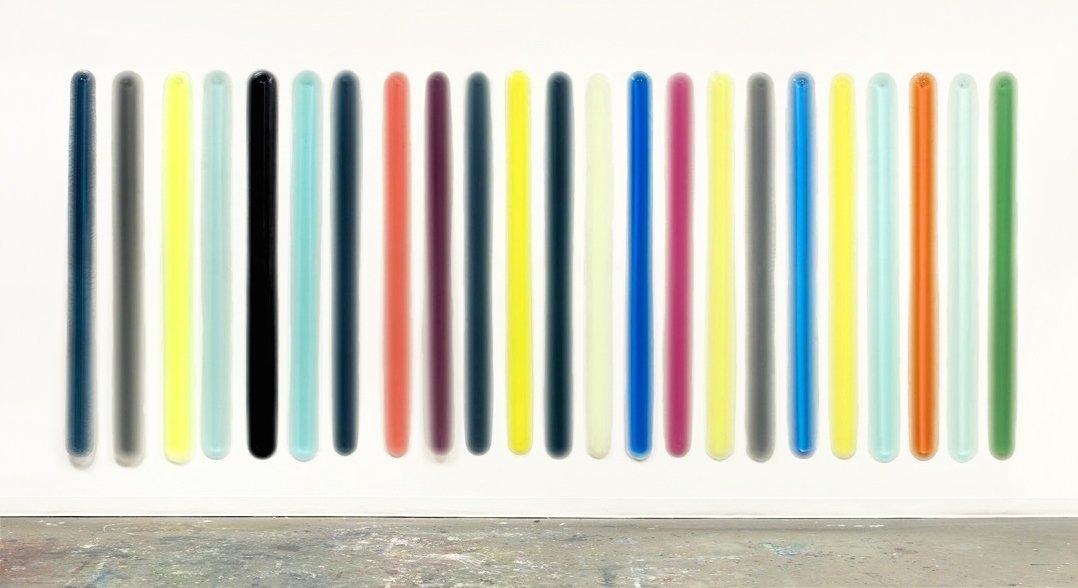 Brian Gross Fine Art is pleased to announce the opening of COLOR, an exhibition of new works by veteran Los Angeles artist Peter Alexander, on Saturday, May 5th, from 4 to 6pm.  On view will be seven of his signature cast urethane sculptures, including a wall sculpture composed of 23 bars, along with a selection of recent gouache drawings on paper.  Throughout his use of diverse media, Alexander creates experiential encounters with color.  Alexander is associated with the Light and Space artists active in Los Angeles from the late 1960s to the present and he has gained an international reputation for his paintings, sculptures, and installations concerning the properties of light and color.  The exhibition will be on view through June 30, 2018.

Vibrating with the powerful sensation of color and its dissipation, Peter Alexander’s works in cast urethane deliver an optically charged interplay of tonalities.  Making its debut is Alexander’s multicolored, monumental wall sculpture entitled 23 Bars.  Each of its elements fade in color and depth along their tapered edges, allowing the elements to merge with their surroundings.  They are also equally opaque and translucent, simultaneously absorbing and reflecting light.  Combined together, the elements in 23 Bars form a transformative experience in rhythmic, pulsating hues.

Peter Alexander will also present free standing urethane sculptures in various shapes, colors, and volumes, including an eight foot yellow “needle”, a leaning column in inky black, a mysterious green-black wedge, and boxes in soft lavender and deep citrus orange.  These works embody the endless possibilities of shadow and illumination within and around the pieces.  Additionally, the exhibition features five new vibrant gouache drawings on black paper.  Formed from a single stroke layered and repeated, Alexander modulates the pressure of his brush to leave thin veils of color on the page.

After working from 1965 to 1972 with polyester resin, Alexander turned to painting, creating his acclaimed “exploding sunsets” and the LAX series, which captured the night grid of the city’s lights. Continuing to investigate the manifestations of light in paintings, drawings, and fabric works, Alexander returned to sculpture in 2009 with a shift to urethane.  This new material has provided a distinct clarity and intensity of color, which has allowed Alexander’s work to evolve.

Peter Alexander was born in Los Angeles in 1939 and received his BFA and MFA from the University of California, Los Angeles. In 2011, he was included in the Pacific Standard Time exhibitions, Phenomenal: California Light and Space and Pacific Standard Time: Crosscurrents in L.A. Paintings and Sculpture 1945-1970, sponsored by the J. Paul Getty Museum.  In 2018, his work was included in the exhibition Endless Summer at the Museum of Contemporary Art, Chicago.