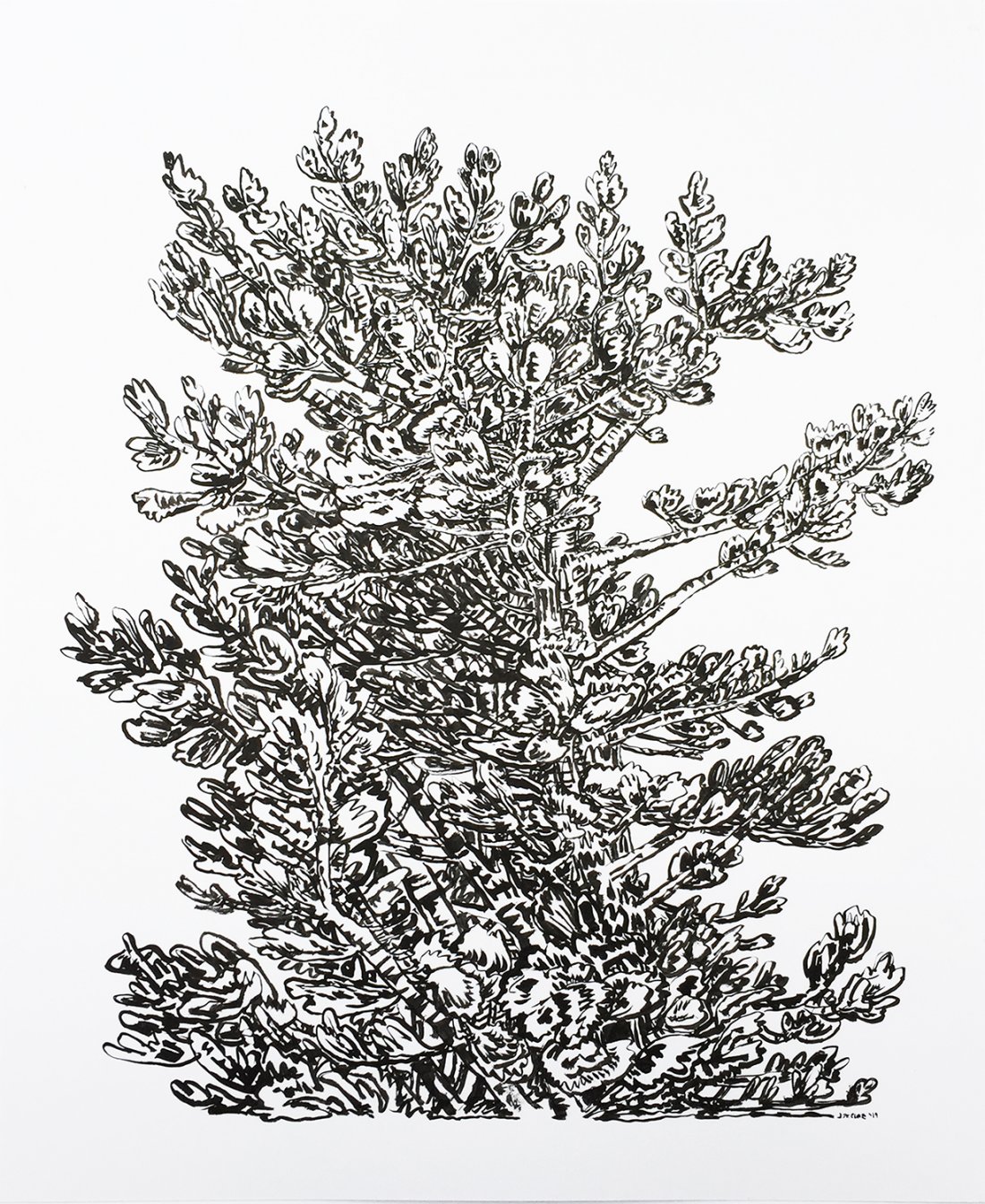 Gallery 16 is pleased to welcome artist Johanna St. Clair to the gallery for her first solo exhibition, The Upsurge. There will be an opening reception for the artist on Friday, February 7th, from 6-9pm.

The Upsurge includes work from the artist’s long investigation using Sumi ink and brush on paper into the pattern-structure of the trees, the ocean, and the sky just outside her door. St. Clair will present a series of minimal, black and white works on paper alongside a series of colorful small oil paintings.

In her early work, St. Clair painted intricate, detailed oil on panel renderings of atmospheric chaos: dots, trees, tangled branches, dense foliage. Shifting away from this in favor of more immediate, looser renderings, the artist’s idea is to capture a direct line to some fundamental aspect of the way the world is organized and to do it with greater freedom and less fuss. St. Clair distills the gestures down to the essence of the subject, creating images that draw you in with their understated yet expressive beauty. ‘I have the feeling that the ink and brush, with their wild fluidity, are conduits to a fundamental current that runs through the subjects. But there is some blurring because I can’t tell if the current that I find is in the subject or in me - perhaps it’s the common thread that runs through both. The works look outward to the world, and also turn inward to the experience of being in the world: the upsurge of consciousness, of perception, that orients us in the world.’

In addition to the works on paper, St. Clair recently started making oil paintings of the same subjects. Much like the ink pieces, the paintings connect some aspect of the outward way that nature is organized with the artist’s inner experience of the subject. “Just like with ink, I have found that they are only successful when I sit directly in front of the subject (as it is shifting in the wind and light), and also know the subject internally from many sessions of drawing it.” Whether working with the black Sumi ink or the range of colorful oil pants, the color (or lack thereof) is not tethered to what the artist sees. It is the artist’s internal logic rather than a literal transcription that is being recorded. Both mediums are fluid and chaotic, but the ink is unalterable, while oil paint builds up, allowing for a deeper, more inward exploration into the idea of the world.

Johanna St. Clair lives and works in San Francisco. Along with her husband, John McCambridge, she co-founded Mollusk Surf Shop which has developed into a cultural institution that integrates surfing, art, craft, music, and film. Mollusk has brick and mortar store in San Francisco’s Outer Sunset Neighborhood, Venice Beach, and Silver Lake, and a clothing line which is widely distributed. A few years after starting the business, Johanna returned to making art. First with drawings from observation on small, blank cards (she keeps a pocket-studio with her at all times), then with her larger-scale ink and brush paintings on paper, and recently with paintings in oil, Johanna's work has grown more direct, fluid, and urgent. Her work has been exhibited in New York, Los Angeles, Paris, Tokyo, and at the Tucson Desert Art Museum. This is her first show at Gallery 16.