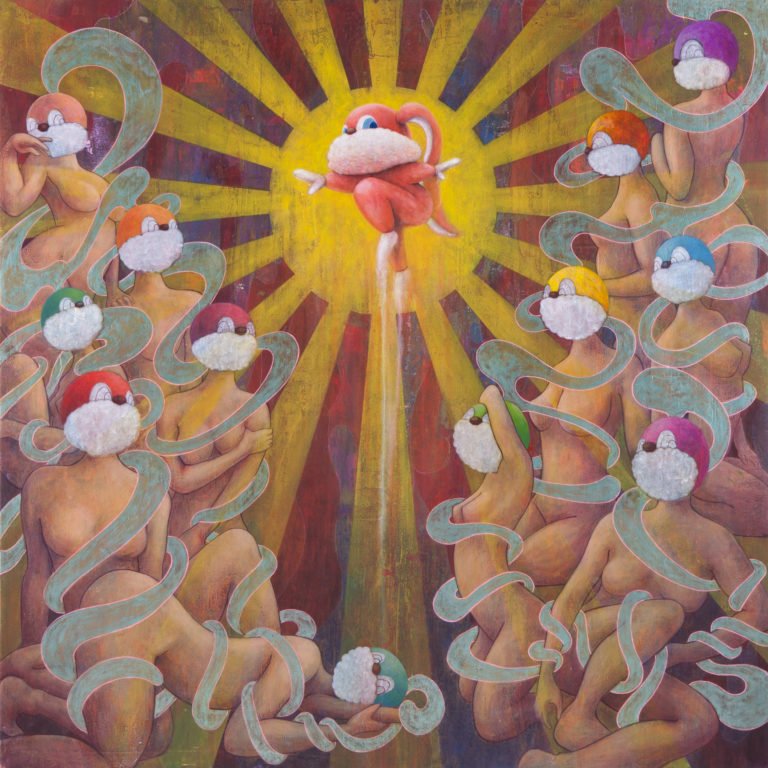 Onishi Gallery is proud to present Poi: A Messenger of Love, the first U.S.-based solo exhibition of Japanese artist Yusuke Ochiai. Working as a street artist in New York City for several years already, Ochiai has gained attention through his public installations, foremost among which is “poieverywhere,” a project in which Ochiai placed miniature anime-style figurines in hidden corners of the city—on traffic lights, in building nooks, on sidewalk crevices. The small, sweet, monochromatic creatures search for belonging in their stillness amidst the towering urban landscape.

Building on this playful engagement with New York City’s public, Poi: A Messenger of Love features “Poi”-related creations—artworks that variously represent Ochiai’s muse named “Poi,” short for “Path Of Imagination.” As Ochiai explains this character, “That’s exactly how I found him, through my own imagination – but now Poi manifests himself in countless forms, on canvas, in concrete, and with paint immersing himself in the colors I absorb. Poi gives me the happiness that I hope to bring to the world.” A fantastical anime figure, Poi has long rabbit-like ears and a round head, and two long arms and legs often extended confidently in a mid-air jump or an expression of happiness. Poi came to Ochiai in a dream in 2012 and conveyed a clear message to the artist: “Just do it. Believe in yourself. Do not give up. I love you.” Ochiai now gives form, color, and opportunity to Poi in order to teach love, and this exhibition offers viewers a glimpse of his creative vision.

Colorful, large paintings fill the gallery like bursts of energy, all centered on depictions of Poi. Borders of creeping flowers, concentric circles of color evoking the mandala, and bright, otherworldly orbs of light frame the unique figure. While his images appear playful and innocent to the eye, titles such as “Sunrise 12+1” and “Super Head Banging” reveal deeper layers of meaning. As Ochiai notes, these visual expressions “represent my emotions and experiences at that particular moment of my life – whether stemming from reality or my own imagined dreamscapes.” They are colorful swirls of love and lust, earthly experience and otherworldly possibility. The paintings pull in viewers to share a moment of connection with Poi, this messenger of love, and envision a dream of another reality.

Yusuke Ochiai was born in Tokyo in 1977 and became entranced with the vibrant colors of his surrounding Japanese landscape at five years old, mixing and matching materials ever since. Today, he lives and works in Bushwick, Brooklyn and has been participating in Bushwick Open Studios in Brooklyn since 2012.

This exhibition is curated by Nana Onishi, the Director of Onishi Gallery, and Kyoko Sato, a New York-based independent curator. For more information, please contact Nana Onishi at 212-695-8035 or nana@onishigallery.com. Or, please visit the gallery website at www.onishigallery.com.