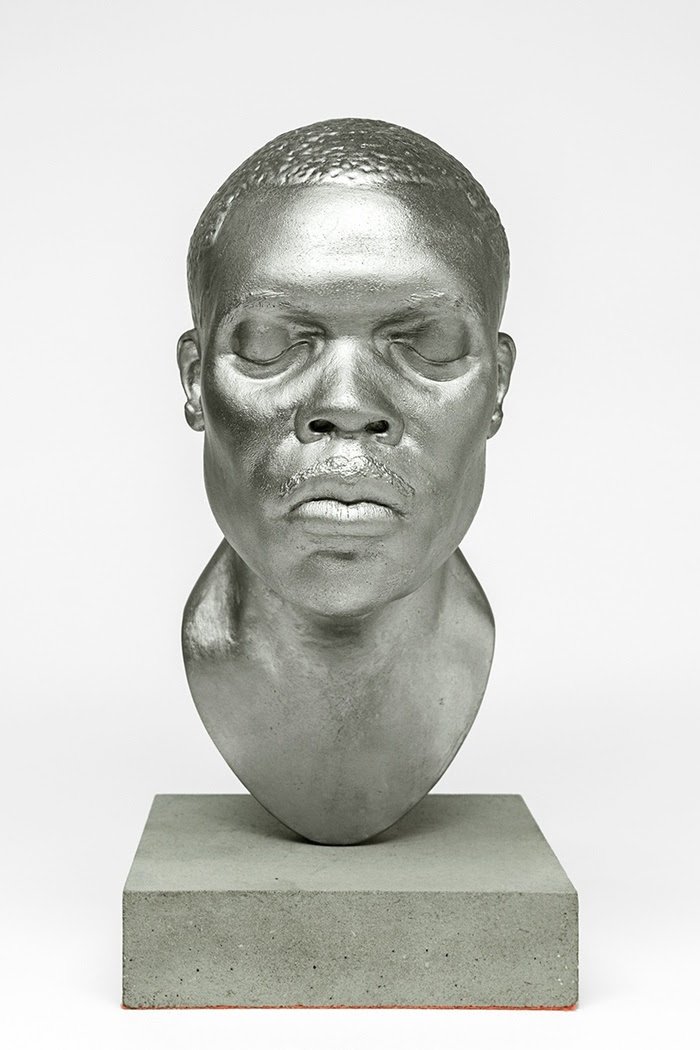 Hales Gallery is delighted to announce Material Visions, a solo exhibition of recent works by Thomas J Price, to be presented at the Hales New York Project Room. This is Price’s fourth solo show with the gallery.

The exhibition of work across media spotlights Price’s use of material culture and materiality in his wider explorations of racial and social identity, perception and representation. It centers on Price’s ongoing series of figurative sculptures, which he has been making since 2005, that interrogate expectations of cultural and aesthetic value and notions of monumentality. Material Visions provides a timely contribution to  increasingly urgent conversations about the histories and meanings of monuments and statues.

The exhibition centers on a bronze statue, Plain to See (2015). The subject, like nearly all of the characters Price depicts, is a black male figure. He wears a plain hooded sweatshirt and sweatpants and holds what appears to be a mobile phone in one hand. His expression and stance are neutral, except for one hand stuffed into a pocket of his sweatshirt. The work poses a challenge to the viewer: how will you choose to see me? The aesthetic and social value traditionally conferred upon the subjects depicted in classical bronze sculptures is recontextualized within a very different contemporary discourse of class, race and gender signifiers. In its arresting monumentality, this anonymous portrait asserts the value of the depicted subject, powerfully subverting traditional social and aesthetic hierarchies.

Alongside this figure, a set of small head sculptures are presented, representing a recent development in the artist’s ongoing series of numbered heads (Head 1 was created in 2005, while Price was still a student at the Royal College of Art in London; in this exhibition, viewers will find numbers 17 to 20). These portraits, like all of Price’s work, depict imaginary subjects amalgamated from a range of sources from classical sculpture to individuals observed in the artist’s everyday life. Fictional, silent beings with no history or identity behind an assigned number, the question of how we see these anonymous characters becomes a fertile field for conversations about materiality and conditioned perception of race and masculinity.

Four of these heads are cast in white acrylic composite, a pale, almost ghostly plaster-like material that simultaneously evokes the luxury of marble surfaces and the more provisional, layered history of raw plaster as a material for the casting of statues. A fifth head, Material Visions (2016), has a very different matieral identity. Cast in an aluminum composite and gilded in palladium, despite its scaled-down proportions and the subject’s quiet, detached expression, this object immediately asserts itself as a venerable object of value and beauty.

Finally, drawing on a less commonly known element of Price’s practice is a two-channel video work, From the Ground Up (2016). This piece turns from imagined sculptural portraits to an unconventional filmed portrait of the artist himself, scrubbing and tying up the laces of a series of his own sneakers and formal leather shoes, framed by a plain white background. Material culture in its broadest sense – the consumption and use of objects and the complex rituals and norms they participate in – is invoked, drawing our attention once more to the processes by which identity is constructed in contemporary society.