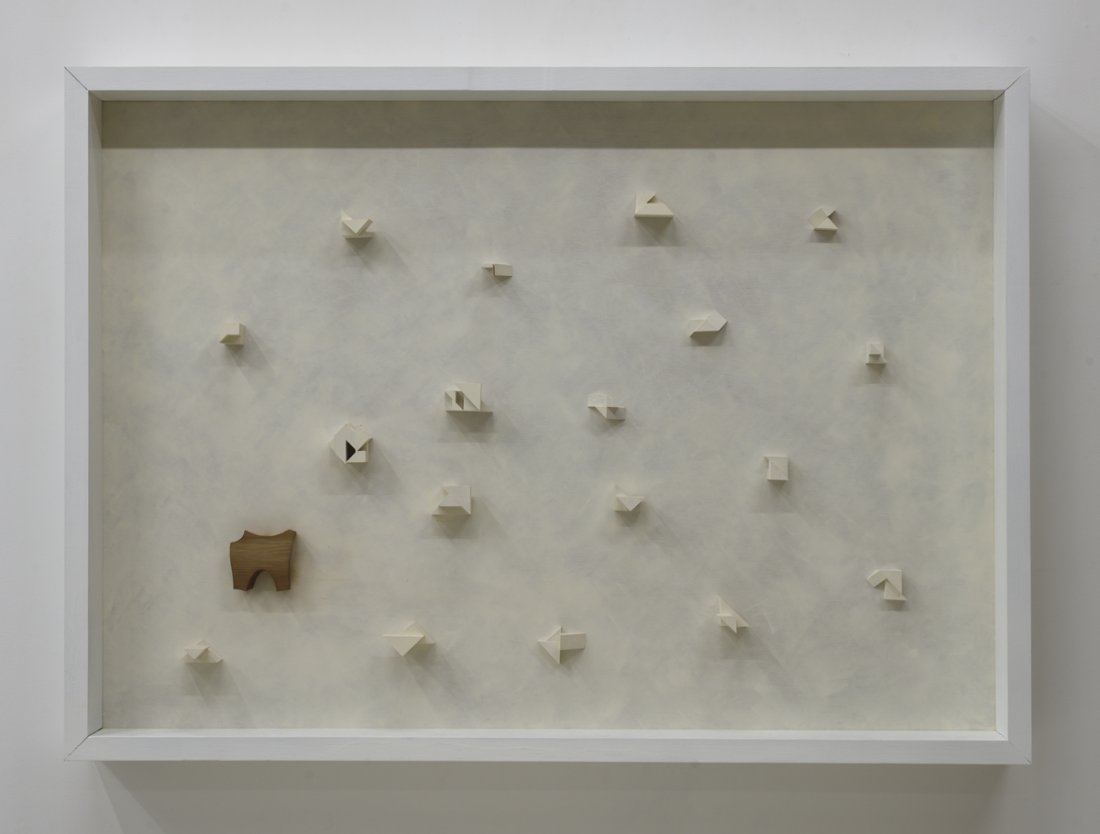 Taka Ishii Gallery New York is pleased to present a solo exhibition of works by Shozo Kitadai from October 19 to November 22. From the 1940s to the 1990s, Kitadai carried out unique conceptual experiments in form and simulation by making works in and crossing various media ranging from two-dimensional ones such as painting and photography to three-dimensional ones such as mobiles and mixed media, as well as stage design, graphic design and model making. This exhibition, his second with Taka Ishii Gallery New York, will primarily feature six works from the 1980s, which represent his playful mind and experimental spirit that he pursued.

Kitadai developed an interest in art while serving in the Japanese military and stationed in Southeast Asia. Inspired by Paul Klee’s poetic, organic paintings and Alexander Calder’s mobiles that incorporate motion and time published in the April 1948 issue of the art magazine Sobi, he began his pursuit of avant-garde art. His submission to the first Yomiuri Independent Exhibition in 1949, a machine-like, abstract oil painting, drew tremendous attention when it was reproduced with praise from Shuzo Takiguchi in the Yomiuri Shimbun newspaper. In 1950, he formed the multimedia art collective Jikken Kōbō  [Experimental Workshop], centered around the charismatic critic Takiguchi, along with Katsuhiro Yamaguchi, Hideko Fukushima, and others, including musicians, whom they met and developed strong friendships with at Fukushima’s house. Jikken Kōbō’s works, which were free of political ideology, were created and presented collectively. Through his involvement with the collective, Kitadai focused his practice on producing mobiles and “auto-slide” (a film projector combining a taped recording and a projection of a color slide film projection, invented by Tokyo Tsushin Kogyo in 1920, a precursor to Sony) over his painting. In 1953, Kitadai was exposed to the photographic work of Kiyoji Otsuji, who photographed Kitadai and Yamaguchi’s sculptural works for the “APN” [Asahi Picture News] series published in Asahi Graph magazine. The encounter led Kitadai to shift his attention to photograms and photographs, announcing his switch in media by publishing the essay “From Painter to Photographer” in the September 1956 issue of Geijutsu Shincho. Kitadai critically dissociated himself from the post-1960s contemporary art world by deliberately presenting his photographic experiments in magazines, a medium premised on mechanical reproducibility. He gradually also distanced himself from photography after the Expo ’70 Osaka, devoting himself to making model airplanes. Finally, in his last years, he produced three-dimensional objects out of wood.

Kitadai, who worked in various media using numerous methodologies, recounts a childhood dream in which he flew model airplanes that he meticulously scaled down on his desk, as follows in the opening pages of his book Mokei Hikōki Nyūmon [Introduction to model airplanes]. “Creating a space of simulation and allowing the spirit freed in that space to play”, the photo-archivist Kin’ichi Obinata summarizes Kitadai’s modelling philosophy in his essay ‘Form and Simulation: Adventure of Kitadai Shozo’ in Form and Simulation: Experiment & Photography of Kitadai Shozo (Kawasaki: Taro Okamoto Museum of Art, 2013), and these words articulates Kitadai’s fundamental interest in modelling. Just as the mobiles, which he made for years, depend on their relation to external conditions of wind and air flow, Kitadai’s experimental production is not concluded in any single work. Every one of his works crucially incorporates its interactions with external factors; this characteristic can be seen in “Meiro Sekkeisha Hikkei” [Handbook for labyrinth designers] (1987-1994) included in this exhibition. In this work, however, it has been pushed further, with human will acting as transformational mediation. The work, which was based on the theme “changes and shifts,” inspired by chess, and exhibited in Kitadai’s last solo exhibition held during his life, features wooden pieces that are placed systematically on a panel, but also accompanied with a string spool. The string, threaded between the pieces, infinitely expand the pattern in which the string is positioned. In his production notes for the exhibition, he wrote the following about the piece in terms of the relation between the figurative merits and demerits and increase and decrease in entropy of the arrangement of the pieces:

This group of works experimentally interrogate the numerous problems that exist between the intended and unintended, the conscious and unconscious… including the problems of Surrealist automatism and automatic writing.

Shozo Kitadai was born in Tokyo in 1921 (and passed in 2001). He studied mechanical engineering at Niihama Engineering School (currently Faculty of Engineering, Ehime University). After being drafted into the army, he served as an engineer officer in Singapore and other locations, where he was exposed to art and began making sketches in his free time. In 1948, after his discharge, he participated in the Summer Modern Art Seminar organized by the Nihon Avant-Garde Artists’ Club and formed the study group Trident with Katsuhiro Yamaguchi and Hideko Fukushima, who were also participants. His oil painting, submitted to the first Yomiuri Independent Exhibition in 1949 received acclaim from Shuzo Takiguchi. That same year, he joined and became the head of the painting section of Seiki-no-kai [Society of the Century], associated with the Avant-garde Geijutsu Kenkyū kai [Society of Avant-garde Art Studies]. Around this time, he developed relationships with the musician Hiroyoshi Suzuki and Toru Takemitsu through Fukushima. In 1951, the Yomiuri Shimbun commissioned them to produce the ballet “Joy of Life” to coincide with the first Picasso retrospective exhibition in postwar Japan and the art collective Jikken Kōbō [Experimental Workshop] was formed to realize the ballet. In 1953, based on Kitadai’s proposal, the visual column ‘APN’, comprising Kiyoji Otsuji’s photographs of sculptures made by Kitadai, Yamaguchi, and Yoshishige Saito, was serialized in Asahi Graph. From then on, Kitadai became seriously engaged with photography and produced a series of photographic print. At the end of the 1950s, he began working in the Graphic Shudan [Graphic Group] and producing commercial photography. When Expo ’70 was staged in Osaka, he gradually turned to model-making. In addition to essays, he wrote Ōgata Kamera no Sekai [The world of large format cameras] (1976), and Mokei Hikōki Nyūmon [Introduction to model airplanes] (1976). His refabricated works included in the exhibition “Japon des avant-gardes 1910-1970”, held at the Pompidou Center (Paris, 1986) drew strong critical interest and helped prompt a reevaluation of his work. His solo exhibitions include “Form and Simulation: Experiment & Photography of Kitadai Shozo”, Taro Okamoto Museum of Art (Kawasaki, 2013) and his group exhibitions include “Tokyo 1955-1970: A New Avant-Garde”, Museum of Modern Art, New York (2013). His works are included in the collections of the Museum of Modern Art, New York; Freer and Sackler Galleries, Washington, D.C.; Tate Modern, London; National Museum of Modern Art, Tokyo; and Taro Okamoto Museum of Art, Kawasaki.