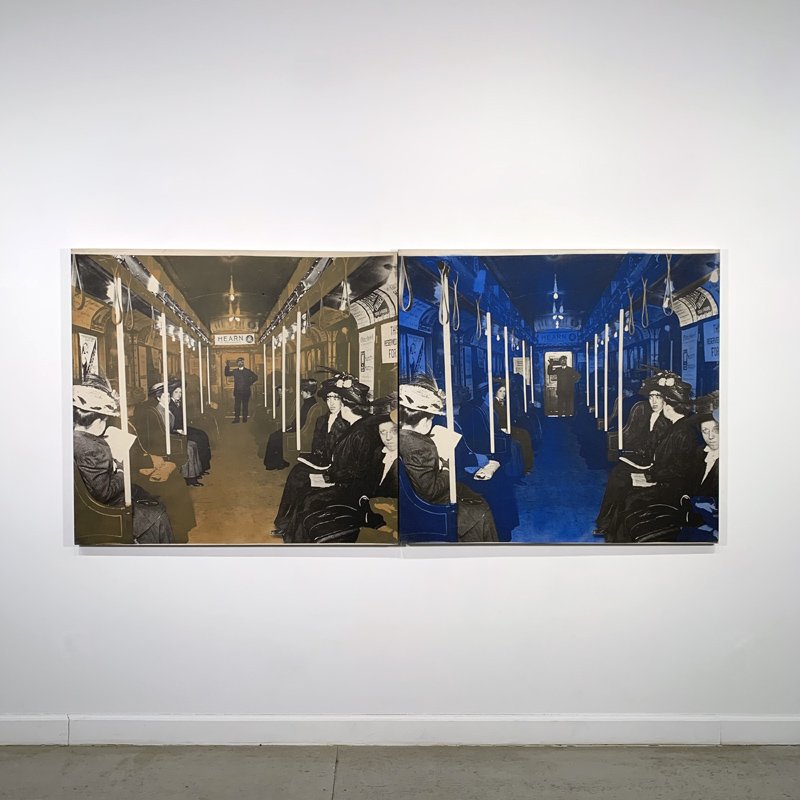 WESTWOOD GALLERY NYC presents a solo exhibition by New York artist, Roger Welch, entitled Expressions of Memory. This is his first solo show with the gallery and the first solo show of Welch’s work in New York in fifteen years. The exhibition will be on view March 4 - May 8, 2021.

Expressions of Memory highlights twenty works from Roger Welch’s narrative art movement founded in the 1970s, alongside artists John Baldessari, William Wegman, and Bill Beckley. The aim of narrative art is to tell a sequential story, often based on personal memories. Welch works in a variety of media including sculpture, photography, video, painting, and performance. This exhibition features four main bodies of work produced from the 1970s through the 1990s: the autobiographic ‘Welch Family’ series, ‘Woven Narratives’ series, ‘Photo Perception’ series, and ‘Austin, Texas Children’ series.

Included in the exhibition is a video installation, “Welch”, 16mm motion picture with sound, 1:27:00, first exhibited in 1972 at the Ileana Sonnabend Gallery in SoHo. The film was edited from family home movies dating back to 1927, to show the cyclical nature of a middle-class family in the suburbs, overlaid with Welch’s own recollections of his family’s life through his relatives’ stories. Coupled with the video are photo diptychs and triptychs utilizing vintage photographs sourced from his family’s archive with participatory hand scripted memories of events by his father, mother, grandfather, and grandmother. The shared memories exemplify the quest of a middle-class family in pursuit of the American Dream in the 1970s as they operated their paint and wallpaper shop in Westfield, New Jersey, family-owned for over three generations.

As Welch’s work evolved through the 1970s, he began to source memories and moments from lives outside of his personal history. In “Preliminaries, First Round: Larry Lee vs Clyde Vaughn” (1976), Welch collaged photos of the boxers during their February ‘76 round with a post-fight interview asking each boxer about their strategy in psychologically besting their opponent. The conceptual work reveals not only the particular memories of the individual, but also the idiosyncratic nature of the sportsman’s psyche. In a similar series “Romantic Dialogues: Pele” (1977), Welch intertwines photographs of a soccer crowd watching a New York Cosmos game, with handwritten love notes depicting a romantic conversation between random spectators revealing their love for their champion Pele, and the sport of the game.

Welch shifted from memories in present time to memories of past time in an analytical series of diptychs from his ‘Photo Perception’ series. Sourcing photographs from the 1930s, Welch asked two collaborators to choose what they remember after briefly studying an image of the interior of a streetcar. The participants’ memories of people and objects were then isolated from the original image, to create a juxtaposed new ‘memory’ image highlighting the individual narratives superimposed onto the historic representation. In “Street Cars: Two Perspectives” (1979-80), the participants remembered streetcar railings and straps, but only one observed the exit door at the rear of the car.

In the 1990s Welch turned his attention to the future, asking children from Austin, Texas to envision what they want to be when they grow up. After working with teachers to cull hundreds of student submissions, Welch worked with a select group of children to create a single collaged portrait of each child’s vision of their future, along with a century old photograph of the town. Speaking about the artworks in a 1991 interview, Welch stated: “I used to work with the past from the view of the present. Now, I wanted to work with the future from the view of today, this present time… I asked the kids to draw over this old image and do something of what they thought the place might look like in the future or, draw what came into their mind. In effect, as they drew, it became a drawing of a change of that place. When they are older, whatever they may be doing, they will be changing the way that city is. No matter what they do, it will be a new environment.”

Roger Welch is an American conceptual artist who moved to New York City in 1970. He holds his BFA from Miami University in Oxford, OH, his MFA from the School of the Art Institute of Chicago, and participated in the Whitney Museum of American Art Independent Study Program. Throughout his career, Welch has pioneered the exploration of memory and identity as an art form. He is best known for his works Memory Maps (1973), Niagara Falls (1974), and Drive In: Second Feature (1982).