Nobuho Nagasawa: Drawn to the Light 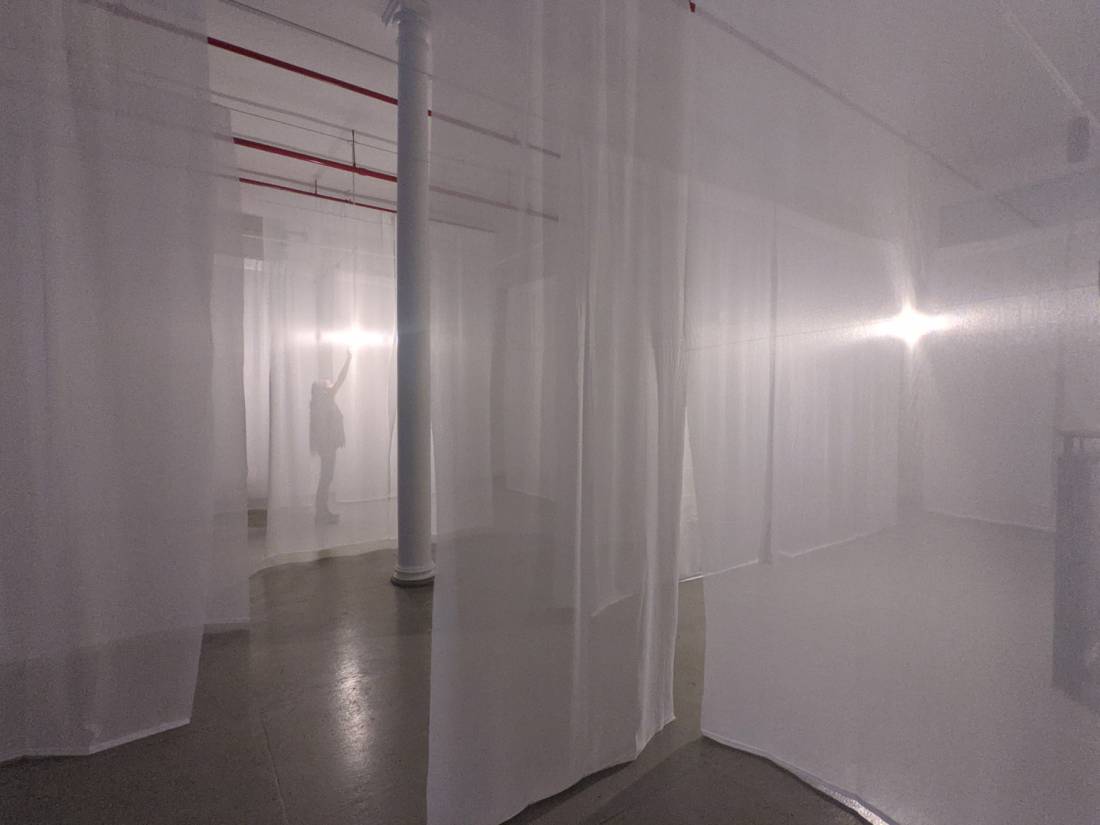 WESTWOOD GALLERY NYC presents a solo exhibition by New York based artist Nobuho Nagasawa. This is her first solo show with the gallery and includes an all-encompassing, site-specific installation entitled Drawn to the Light, which combines the artist’s deep-rooted tradition of multidisciplinary art, fusing technology, light, sound, and healing through community engagement.

The gallery installation turns the space into an ephemeral city to honor the cycle of life through symbolisms from nature. Prior to the exhibition, Nagasawa recorded stories from individuals in three public spaces, Tompkins Square, Washington Square, and Columbus Park. The three parks triangulate an area in which WESTWOOD GALLERY NYC is located, in the center of the Bowery community. Visitors can walk through the gallery as an ethereal space with white scrim panels hanging from the ceiling and marking off three contextual spaces related to each park. Each of these three areas will have a single light source, to which the symbolic luna moths are drawn to; and the light will emanate the oral stories of those who lost loved ones.

On a 35-foot gallery wall with sculptures of the moon, Nagasawa will stencil hundreds of luna moths over the course of the exhibition, marking a visual memory which connects to emotional memory. The luna moth, a mythical symbol in many cultures, represents the inner spirit, intuition, awareness, and trust in ourselves. After 12 months in metamorphosis, the luna moth exists for less than 10 days as a winged adult and is rarely seen due to its nocturnal nature. Their short life span reminds us of our moments to live and love to the fullest.  On the final day of the exhibition, Nagasawa will erase the moths as a symbolic act of release for all we have lost during Covid-19.

The ‘Drawn to the Light’ installation also references the 500-year tradition of Japan’s Obon, a summer festival to commemorate ancestors. On the last day of Obon, candle-lit lanterns are released into rivers to guide the spirits of ancestors back to the other world. Following this tradition, Nagasawa’s installation in the gallery is a two-month extension of the three-day Obon festival, which ends according to the lunar calendar on August 16th. The three light and sound environments capture the same spiritual qualities of the Bon-chochin, releasing many stories in remembrance of the spirit of precious lives lost.

Nagasawa works in unconventional environments, often outside the mainstream art world and gallery settings. She revitalized a destroyed synagogue site in Berlin, transformed abandoned World War II bunkers into motels for lovers, adapted a Turkish penitentiary into a sonic environment, created a tribute to the lost knowledge at the Alexandria Library in Egypt and flew kites with the local community in Fukushima after the nuclear disaster. Her works invite audience participation and community collaboration to reveal and address wounds from the past and give dignity to the healing process by juxtaposing the weight of dark history with resilient and revitalizing poetic gestures.

Nobuho Nagasawa is a trans-disciplinary artist whose site-specific and community responsive works explore the politics, ecology, and psychological dimensions of space and people. Her projects range from sculptural installation, architectural intervention, and time-based work, to activism, and public art. Based in New York since 2001, Nobuho Nagasawa was raised in Europe and Japan, and received her Master’s degree at Hochschule der Künste in Berlin. She came to the United States in 1986 by invitation of the California Institute of the Arts, where she studied art, critical theory, and music.

Her work has been published in books including Contemporary Artists in Japan: Sculptors and Installation Artists (Yuji Maeyama, 1992), Japanese Art After 1945: Scream Japanese Against the Sky (Alexandra Munroe, 1994), Lure of the Local: Senses of Place in a Multicentered Society (Lucy Lippard, 1997), Wander on this Planet: Alternative Way of Life in the Age of Internet (Takashi Serizawa, 1997), Epicenter: San Francisco Bay Area Art Now (Mark Johnstone, Leslie Aboud Holzman, 2002), Critique of Art about Tenno Emperor System: Beauty and Universalism and Nature (Hiroyuki Arai, 2004), and Art after the Bomb: Iconographies of Trauma in Late Modern Art  (Darrell Davisson, 2008). Her essays in academic journals include Beyond Japanese Women Artists: Transnational Dialogues in the Art of Chiharu Shiota and Nobuho Nagasawa (Midori Yoshimoto, 2014) and Umi no Utsuwa and Earth Vortex: Nobuho Nagasawa Interweaves Oceanic and Island Imageries (Midori Yoshimoto, 2016). In the US, her work has also been reviewed in Art in America, Art Asia Pacific, Sculpture, The Los Angeles Times, The San Francisco Chronicle, the Pittsburgh Tribune-Review, and The New York Times by Holland Cotter.

In the field of public art, Nagasawa has completed over forty commissioned projects and has received numerous awards. She has also published master plans and worked in collaboration with architects and engineers for civic projects such as City Halls, government plazas, schools, libraries, parks, and transportation projects. She is a three-time recipient of the “Excellence in Design Award,” the highest governments' public art honor, first in Los Angeles (1996) and then in New York (2006 and 2016) given by the Public Design Commissions. In 2018, she created a sculptural environment entitled “Luminescence” at Hunter’s Point South Waterfront Park, one of New York City’s most ambitious park and developments in decades. This project has been awarded numerous awards including Excellence in Civic Development Award (Urban Land Institute 2020), Regional & Urban Design Award, (AIA 2020), Honor Award, National (ASLA 2019), and Best Urban Landscape MASterworks Award (The Municipal Art Society of NY 2019) among others. Awards and recognition of "Luminescence" includes Excellence in Design Award (2016), The Best Public Art in NYC, Curbed New York (2018) and Women-Designed NYC (2019) by the City of New York.  "Luminescence" was recently highlighted in The New Yorker’s ‘Going On About Town’ column.