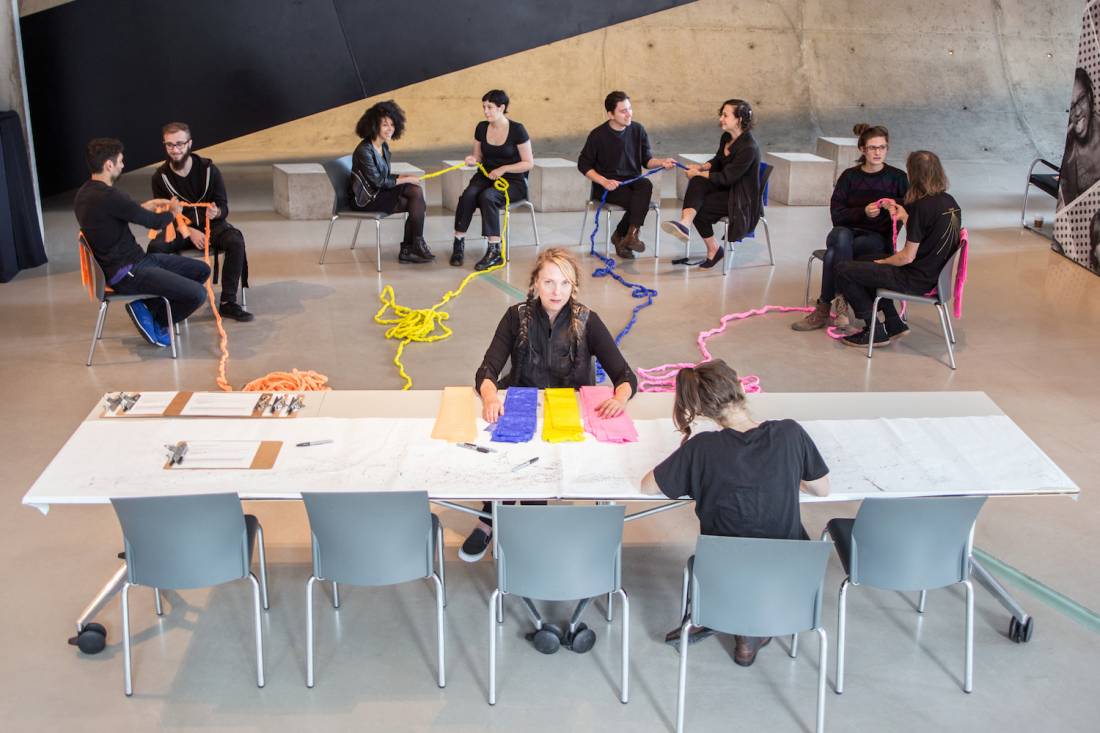 Cristin Tierney Gallery is pleased to announce Be Part of It!, a new interactive performance and exhibition by MK Guth. Be Part of It! begins at 10:00 am on Monday, July 18th. The artist will be in residence at the gallery for the first two weeks of the exhibition, and the public is invited to create the artwork with her from July 18th through the 23rd. A reception will be held halfway through the exhibition on Friday, July 29th, from 6:00 to 8:00 pm.

Guth has undertaken several performances braiding hair in the past two decades. In 2008, she created two participatory artworks using braids: one with the Yerba Buena Center for the Arts and one for the Whitney Biennial. In Yerba Buena, Guth asked people to write their thoughts about the word “feminist” on pieces of brown fabric that were braided into Guth’s hair. At the Biennial, she created a growing sculpture from fake hair braided with scraps of red flannel on which visitors wrote their answers to the question, “What is worth protecting?” At perhaps the artist’s most grueling performance, her 2011 residency at the Cosmopolitan’s P3 Studio in Las Vegas, Guth asked people to write their wishes on ribbons that were braided into extensions attached to the artist’s hair. By the end of the project, the braids were each 300 feet long and weighed several hundred pounds.

Be Part of It! is the artist’s first interactive braiding performance with the gallery. Visitors between July 18-23 will be asked to write their names onto silver satin ribbons, which will be added to a braid extending off Guth’s hair. In the process of contributing their names, the public will have the chance to speak to Guth about their thoughts on connection and participation. The artist compares the request to include one’s own name in the artwork to a risk: “It is being willing to engage the unknown, to chart new territory in order to gain new knowledge or experience. It speaks about commitment.”

Guth will keep the work attached to her hair as the braid grows in length and weight through July 23rd. Over the following week, July 25-29, the braid will be cut and she will begin to sew the ribbons and faux hair into vessel-like sculptures in the gallery. The artist’s residency concludes on the 29th, and the finished works will remain on view through August 12th.

Audience interaction is at the heart of Guth’s practice. With each performance she hopes to shift viewers’ mindsets and prescribed patterns of navigating life through one-on-one conversation. Conceived in early 2022, Be Part of It! was directly influenced by the isolation and loneliness experienced by many during the pandemic. Guth seized the opportunity to create a work about belonging, in which authorship would be completed by participants. The title is not just a summation of the performance, but an invitation to be included in something larger than ourselves, linked to other people. Join Guth in Be Part of It!, and question what it means to be allied to something, be classified in a group, or own allegiance to another.

Small shifts in what is familiar amplify human presence and speak to the intricacies of social relations in MK Guth’s work. Guth (b. 1963, Stevens Point, WI) is a visual artist working in sculpture, performance, and interactive projects. She has exhibited and performed with numerous galleries and institutions in the US and abroad including The Contemporary Art Center, Cincinnati; The Whitney Museum of American Art; Boise Art Museum; Yerba Buena Center for the Arts; Henry Art Museum; Art Museum of Sonoma; Weatherspoon Art Museum; Akron Art Museum; Hallie Ford Museum of Art; Willamette University; The Melbourne International Arts Festival; Nottdance Festival; Swiss Institute; Gallery-Pfeister; Gudhjem Denmark; and with the Art Production Fund (NYC/Las Vegas). She is a recipient of a Ford Family Foundation Fellowship, Bonnie Bronson Award, Betty Bowen Special Recognition Award through the Seattle Art Museum, and an Award of Merit from the Bellevue Art Museum. Guth is Emeritus faculty at the Pacific Northwest College at Willamette University in Portland Oregon. Her studios are located in Portland, OR and Coeur d'Alene, ID.