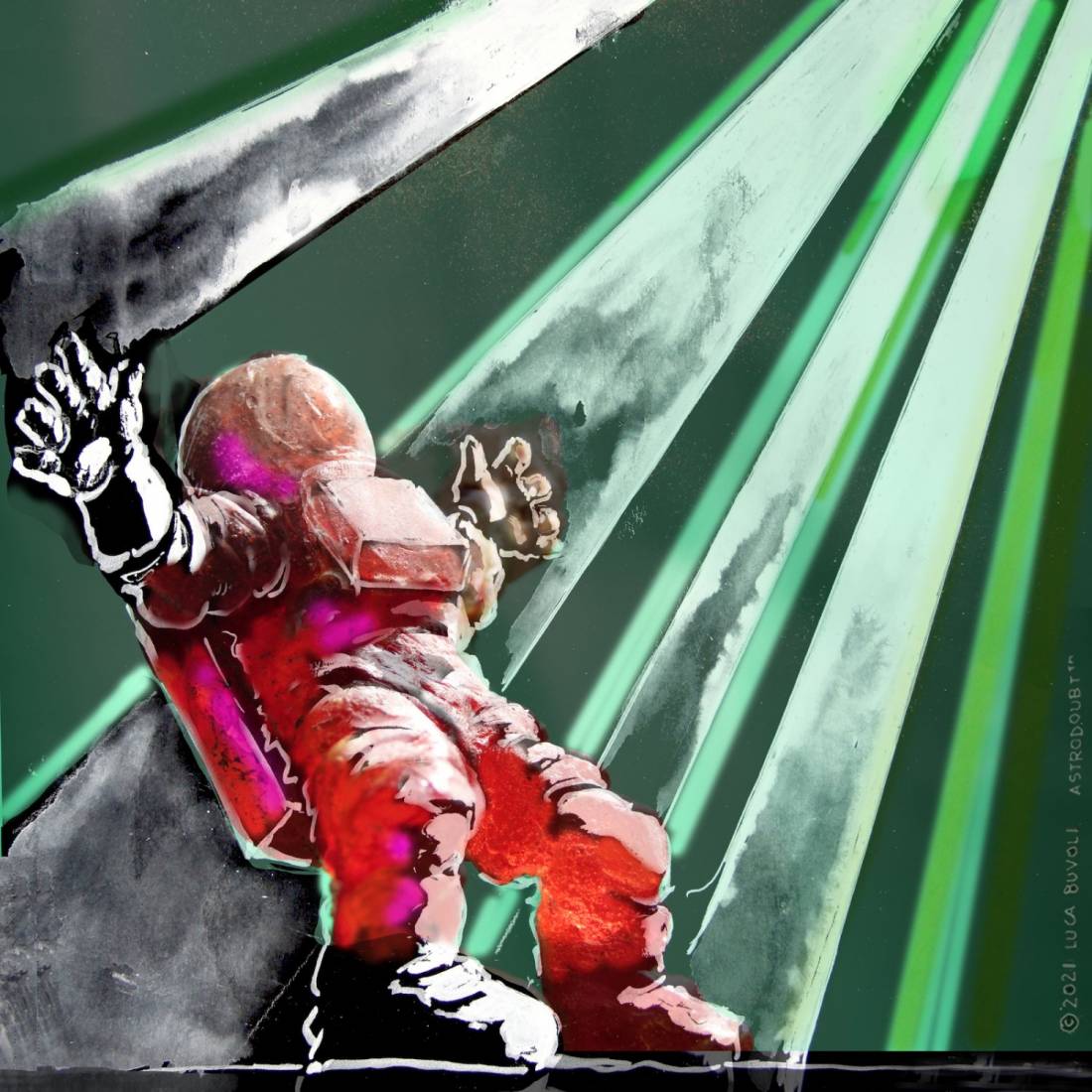 Cristin Tierney Gallery is pleased to announce Astrodoubt and the Quarantine Chronicles (An Introduction), an exhibition of Luca Buvoli's new work curated by John G. Hanhardt. This is Buvoli's first project with the gallery, and his first solo show in New York in 13 years. Astrodoubt and the Quarantine Chronicles (An Introduction) opens the evening of Friday, January 28th with a reception from 6:00 to 8:00 pm. The artist will be present.

Astrodoubt and the Quarantine Chronicles (An Introduction) speaks directly to our times and the changing expectations, hopes, fears and vulnerability that fill our lives. Based on a conceptual and tragicomic graphic novel posted on Buvoli's Instagram (@astrodoubt_) beginning in April 2020, the exhibition explores the challenges of navigating daily life in a pandemic-ridden world. Through the perspective of the spacesuit-wearing protagonist, Astrodoubt, the works excavate the impact of our collective divergence from and return to "normalcy." As guest curator John G. Hanhardt notes in his catalog essay, "Preparing the exhibition of Luca's drawings, sculptures, installations, and videos on view in the Cristin Tierney Gallery was like putting together a conceptual jigsaw puzzle of pieces that revealed the artist's understanding of the traditions of drawing, the graphic languages within scientific and popular culture, the narrative forms of comics and the graphic novel, and the movement of graphic animation."

Hanhardt was reintroduced to the work in the last year as Buvoli, who recently reemerged from a battle with cancer, cultivated a virtual audience in isolation, sharing video works and images online daily on Instagram.

At the center of the exhibition is a large-scale wall sculpture Galaxy Wall that invites the viewer on an epic imaginary journey, turning a mundane episode of home vacuum cleaning into black holes merging in outer space. Projected across the gallery is A Brief History of Time (Under Covid) - in 7 Lessons, Buvoli's latest video. Through engaging hand-painted animated sequences, the work chronicles how time is understood in philosophy and science. Welcome to Covidville, a 5-channel video animation, uses DIY sets and low-tech claymation to narrate Astrodoubt's drifting and wandering with drama, absurdity and humor. Related gouaches, watercolors, collages, sculptures, portfolios and artist's books, and narrative sequences of drawings will also be on view.

The series Astrodoubt and the Quarantine Chronicles is part of Space Doubt, a multimedia "science and art expedition" started in 2009 thanks to a collaboration with NASA scientists.

Luca Buvoli (b. 1963, Italy) is a multimedia artist who has exhibited internationally for over 30 years. His sculptures are included in the permanent collections of institutions such as the Museum of Modern Art, New York, and the Guggenheim Museum; his animated films and videos have been shown individually or as part of his expanded multimedia projects at the 2007 Venice Biennale, the 1997 Johannesburg Biennale, and at many international museums, biennials, and institutions. Museum solo shows include the Philadelphia Museum of Art (Video Gallery), M.I.T. List Center, ICA in Philadelphia, Weatherspoon Art Museum, Glassell School of Art of the Museum of Fine Art, Houston, Austin Museum of Art, Queens Museum of Art, and the Santa Monica Museum of Art. In 2020, the Phillips Collection, Washington, D.C., commissioned Buvoli an episode of Astrodoubt for the inaugural online solo exhibition of the museum's Digital Intersections series. Buvoli is the Director of the Mount Royal School of Art Multidisciplinary Master of Fine Arts Program at the Maryland Institute College of Art (MICA) in Baltimore, MD. His studio is based in New York.

John G. Hanhardt is an independent film scholar based in New York. He began his career in the Museum of Modern Art's Department of Film and went on to establish the film program and study collection at the Walker Art Center. He was curator and head of the film and video department at the Whitney Museum of American Art, where he curated the film and video selections for the Biennials from 1975 to 1995. Hanhardt was also Senior Curator of Film and Media Art at the Solomon R. Guggenheim Museum and the Smithsonian American Art Museum and Consulting Senior Curator of Film and Media Art at the Memorial Art Gallery of the University of Rochester.

Founded in 2010, Cristin Tierney Gallery is a contemporary art gallery located on The Bowery with a deep commitment to the presentation, development, and support of a roster of both established and emerging artists. Its program emphasizes artists engaged with critical theory and art history, with an emphasis on conceptual, video, and performance art. Education and audience engagement is central to our mission.

Cristin Tierney Gallery is a member of the ADAA (Art Dealers Association of America).