"Kind of blue" by Benoît Trimborn 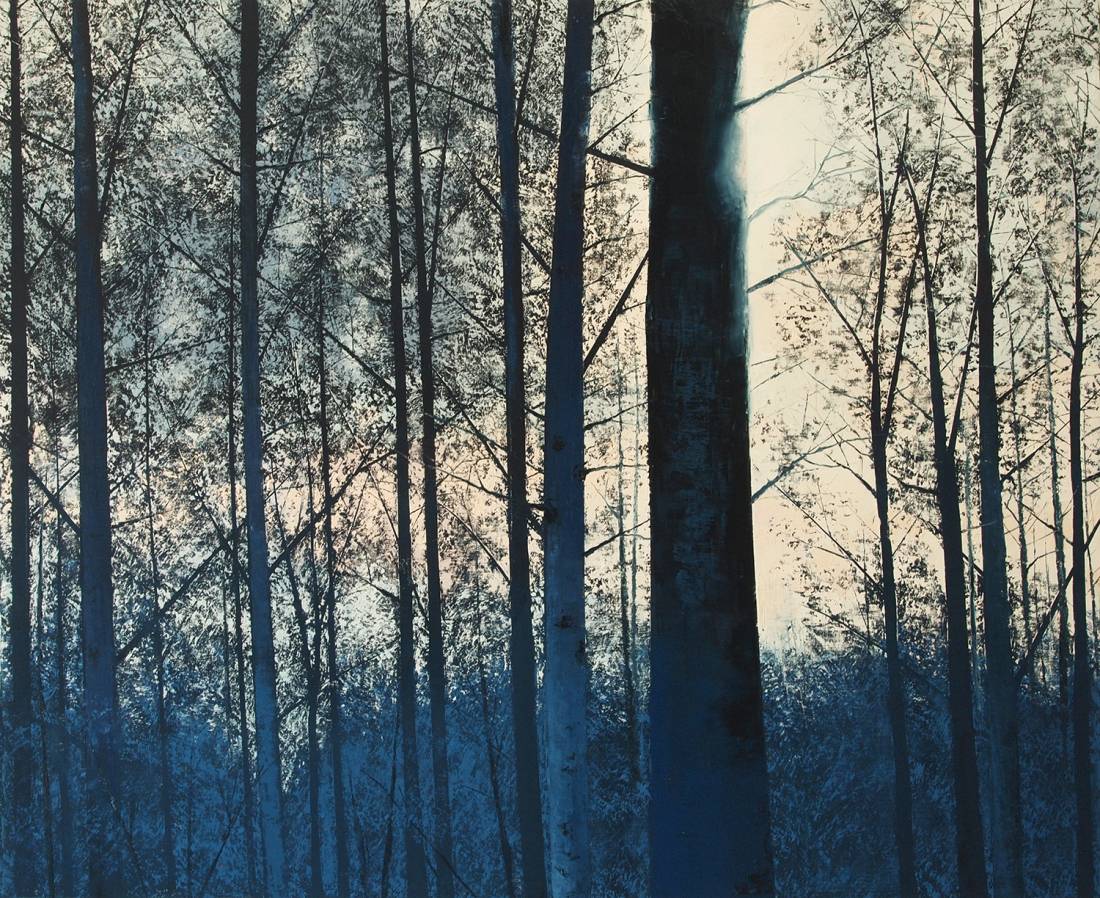 HUGO GALERIE is pleased to present Kind of Blue, a solo exhibition of Benoît Trimborn’s paintings of our wondrous, natural world. Named for the Miles Davis album, Trimborn’s show shares more with the jazz masterpiece than a sublime mood; it is genre bending.

Trimborn may be internationally lauded as a painter, but he is in fact an equally talented, classical pianist—even treating attendees to an impromptu concert at his last opening reception at HUGO. His musical sensibilities infuse his artwork, lending his paintings an unmistakable balance, serenity, and harmony.

Whereas classical music is known for its complex arrangements, jazz is known for improvisation and variation. Similarly, this collection—or composition—of paintings is a riff on classic landscapes. Like a jazz musician inspired in the moment, Trimborn describes the emphasis for the color blue as a calling he did not question, saying “the real question is to know how to paint a landscape specifically highlighting this color rather than knowing why.”

Davis’ revolutionary album was groundbreaking for its use of modal jazz. Modal jazz operates according to characteristic melodic and harmonic behaviors, but beyond the constraints of chords. Davis referred to modal composition as “a return to melody,” and described it as “a challenge to see how melodically innovative you can be,” stating there are “fewer chords but infinite possibilities as to what to do with them.”

Trimborn has extemporized with color previously, depicting the countryside and coastline as if through tinted filters. But there is something special about his use of the color blue here. Landscapes awash in its cool palette are melodic and mesmerizing. Their atmospheric quality is immersive. His tone on tone variations of bucolic environments do not constrict vision but spark imagination. The synchronicity of hues spurs movement and texture that defy realism. Who knew that fewer colors would invite infinite possibilities as to what to do with them? How to experience them? What can be understood from them? Perhaps not even Trimborn, who reminds us “artistic creation has its own authority that ignores reason.” Don’t just look—listen to his paintings. There is music to be heard.

French artist Benoît Trimborn is renowned for his large-­scale, stunning landscapes in oil on canvas. Trimborn, trained as an architect, categorizes his work as “contemporary impressionism;” by this, he is referencing his unusual approach to ordinary subjects, his emphasis on the ethereal quality of light, and his focus on the natural world.

On his work, Trimborn states:

The morphology of the landscapes, or more essentially, the space that the countryside paints, draws my attention and is like the spark of an idea. As an architect, I see there a breath, a light, a rhythm that can form on its own a principle of beauty. Thus, in painting, I am guided by these places of the countryside, they go through the seasons, but also through meteorological and agricultural variations… So, I imagine the passage from the space of the countryside to the space of the canvas. It is a passage to do without useless chatter, because everything is there… More than using the painting as a means of communication of my own message, I prefer making the painting talk, leaving it to ‘say the last word’… The represented elements compose atmospheres whose impression I seek to accurately convey, like the musician, who accurately follows his sheet music. The figure of the man, who is never represented, is, however, sensibly present in these strongly altered and elaborate landscapes. In this effort, the contemplative attitude prevails, much more than the adventurous attitude. No message and no story should disturb the viewer’s perspective…

Trimborn’s extensive country and water scenes lack human forms thus they encourage contemplation and a careful study of nature. While the presence of humanity is, at times, hinted at by a well-­maintained field of crops or pasture of cows, his paintings tend to highlight the immeasurable vastness of nature and the relative smallness of everything else. His work brilliantly captures the changing seasons, the fleeting visions reflected in his pools of water, and the complex relationships between light, water, and the sky.

Other events from Hugo Galerie