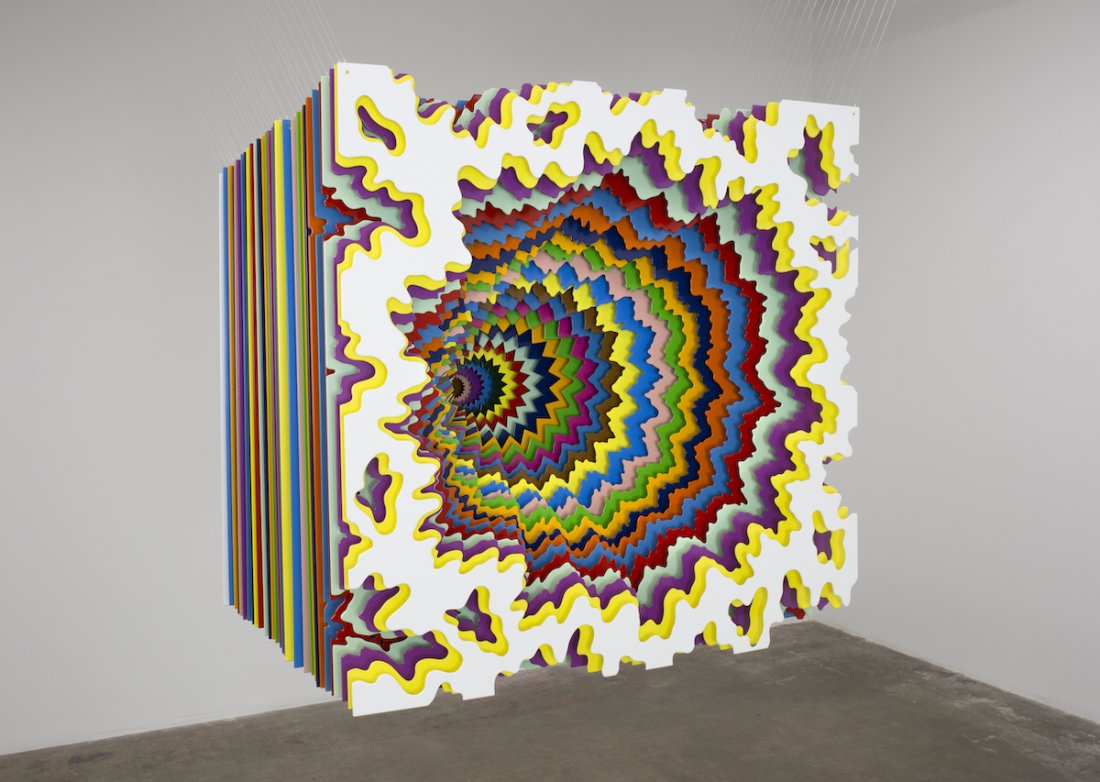 Joshua Liner Gallery is pleased to announce Jen Stark's inaugural solo exhibition with the gallery, Dimensionality. The Los Angeles based artist will transform the white cube into a kaleidoscope of color. Dimensionality opens June 20 and will remain on view through July 19, 2019. The artist will attend the opening reception.

In her practice, Stark balances optical seduction and perceptual engagement. Imbued with kinetic, undulating effects, Stark’s work resembles organic, molecular, or cloud-like structures. At first glance, the artist’s compositions and vivid colors appear alien and otherworldly, when in fact they are based on the natural world. The vibrant colors are inspired by the “attractant/repellent properties of flowers encouraging pollination or insects warning birds of their poisonous traits, and the luminous mystery of phosphorescent sea creatures,” while the visual systems “simulate plant growth, evolution, infinity, fractals, mimetic topographies, and sacred geometries.” In addition to the biological, Starks’ atmospheric and minimalist configurations tap into the visual lineages of Yayoi Kusama, Sol Lewitt, Tara Donovan, Tom Friedman, Andy Goldsworthy, Ernst Haeckel, and the Finish Fetish artists of 1960s Los Angeles.

The fields of math, science, and physics also heavily influence Stark, most notably, concepts such as, optical illusions, The Fibonacci Sequence, fractals, and Riemannian geometry that explores the theory of curved space in the flat universe. As the artist explains, “I think a lot about fractals–one small shape that is identical to the next and keeps on going infinitely.” Suspended from the ceiling, 30 Cubed, is a cube fashioned from thirty uniformly spaced aluminum sheets. From the front, a spiral fractal manifests from inside of the cube, moving outward.

Dimensionality features Stark’s colorful paintings, sculptures, installations, and a mural. As the exhibition title suggests, Stark plays with painting and sculpture by adding or accentuating the dimensions of her work, often transforming two-dimensional objects into three-dimensional ones. Squared, composed of thirty-five square sheets of powder coated aluminum, inhabits the wall like a painting. Each sheet, painted a different color, has a concentric square fold that extends outside the picture plane towards the viewer. Stark adds an extra dimension to Ethereal Vortex by projecting subtle moving waves of light onto the surface of the painting using Lightform, a device that projects augmented reality. The waves strobe and pulsate, creating the illusion of something static coming to life. Gradial Continuumtransforms as the viewer walks around the work. One side of the sculpture features a full color gradient and a mirrored surface on the other. From the front, it appears as a cohesive composition of concentric circles, while from the side, it resembles an elongated sequence of rings.

Above and below the reception desk, a mural showcases the artist’s signature drips, adorned with contrasting colors. This vibrant work reinforces Stark’s aim to jolt the viewer out of their complacency, into an immersive environment full of “echoing patterns and the implausible designs found in nature,” as the artist describes.