Gestures of Affection: In Memory of Louise Fishman 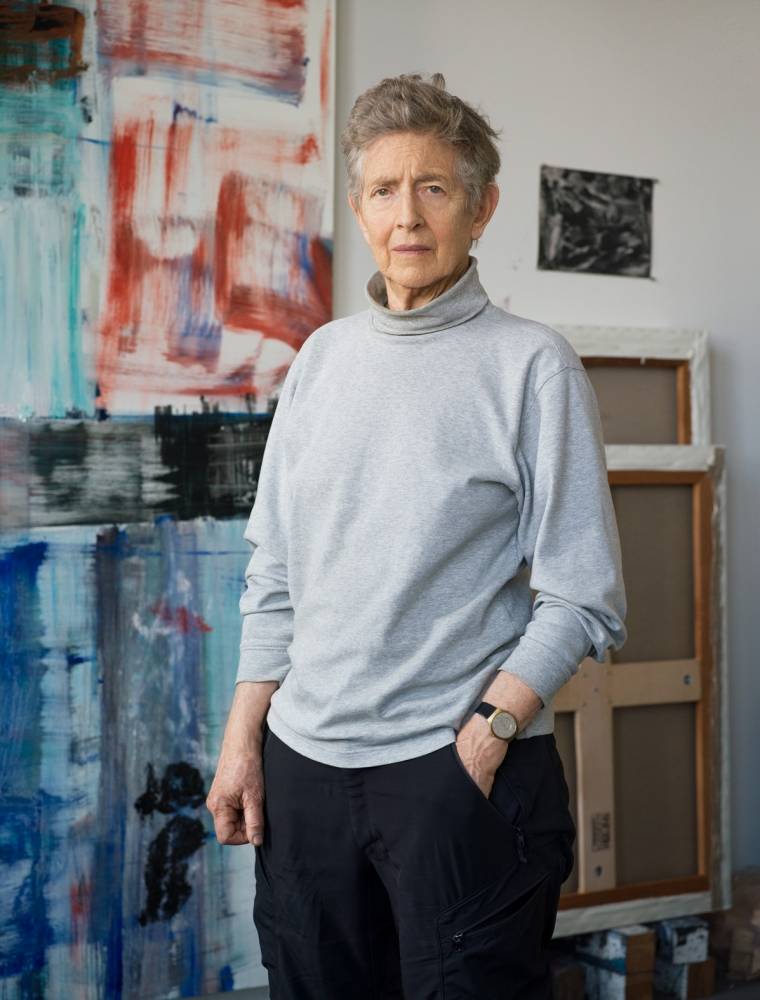 Thomas Erben Gallery is honored to present Gestures of Affection: In Memory of Louise Fishman, a special exhibition of work by Louise Fishman (1939-2021), who passed away over the summer, alongside that of some of her closest friends and colleagues, Suzan Frecon (b. 1941), Harriet Korman (b. 1947), Carrie Moyer (b. 1960), Ulrike Müller (b. 1971), and Dona Nelson (b. 1947). The exhibition has been organized by independent curator Melissa E. Feldman, who has known Fishman since she began writing about the artist's work in the '90s. Thomas Erben knew Fishman through Korman and Nelson, gallery artists, and as a neighbor, with his gallery occupying the same building as Fishman’s studio of over 25 years.

Fishman’s circle consisted mainly of fellow abstract painters. Taking this as a natural point of departure, Gestures of Affection focuses on the genre to which Fishman singularly devoted herself. The New York-based, all-women show evokes the downtown women’s consciousness-raising and feminist art groups that were so formative for Fishman.

Gestures of Affection surveys an artist’s life not only through her work - of which a few major examples are on display - but through these friendships. Nelson and Fishman met in the '70s through the women's movement, in which Korman was also involved, as were most ambitious, tuned-in New York women artists at the time. It was during this period that Fishman swore off conventional painting, stitching cut-up canvases into woven grids and making hand-sized object-paintings from found materials.

By the '80s, Fishman had made peace with the fact that, despite the gender politics around American Abstract Expressionism, she was an abstract painter. However, the rise of postmodernism dismissed any kind of painting besides Neo-Geo and pop-graffiti as irresponsibly apolitical, self-indulgent, bourgeois, and theoretically naïve. Fishman and her contemporaries – those featured here as well as Guy Goodwin, Margery Mellman, Judy Rifka, Amy Sillman, Joan Snyder, and Stanley Whitney, among others – carried on while endgame semiotics and histrionics around the death of painting raged outside the studio door.

The varied practices represented by the selection of artists signals Fishman’s openness to new art and changing times, an openness which might seem unexpected for a lifelong practitioner of gestural abstraction who was drawn to the classics: Chinese calligraphy, Cézanne, Soutine, and Duccio. While there is inevitably some overlap, each artist’s work points to different registers of abstract painting, beginning with the idioms that ground Fishman’s work: the allover composition, the gesture and the grid.

Nelson takes these elements to the extreme in freestanding, two-sided paintings. Stretcher bars themselves become bright grids in these unconventional door- and wall-sized diptychs set back-to-front as opposed to side-by-side. Layers of stained, poured, and hosed-down paint, three-dimensional brushstrokes of paint-soaked cheesecloth, and occasional figurative elements accumulate across every surface.

By contrast, Frecon and Müller’s paintings are studies in simplicity and reduction. While Frecon had been close to Fishman since the '90s, Müller is a more recent colleague. Both Müller and Frecon craft compositions of clean-edged color, but the resemblance ends there. Müller contributes a pair of characteristically diminutive, jewel-like enamel paintings that reference the world of design, decor and fashion. Given that her practice encompasses murals and woven rugs with pre-pop Warhol-type figuration, the subtext here points to art’s entanglements with consumerism and desire. Frecon’s serene, spacious compositions have no such roots in contemporary life, existing instead in a world unto itself. In the tone-on-tone monochrome haematites (undated) named after the principal form of iron ore and borrowing the mineral’s color, Frecon references nature only insofar as it serves her eye for light, color, and space. The composition of casta diva (for Louise), 2021, is a tenuous arrangement of figure and ground, forest green hovering on an indescribable pink, evoking the same mood as the Bellini aria for which it is named, Fishman’s favorite Maria Callas performance.

Like Müller, her contemporary, Moyer is also a product of the digital era, toggling between surrealism and abstraction in a way that only a digital savant - and former graphic artist - can. She updates these modernist traditions through keyed-up color, smooth, photoshop-like transitions, revivalist mystical imagery, and glitter. The large painting Peg Leg with Strawberry Jam, 2012, dates back to a time when Moyer was engaging deeply with Fishman’s work and writing about it for art publications. The all-over, swirling composition and its unusually raw, unleashed quality reflect the artist's preoccupation with classic gestural abstraction during this time.

Korman serves as the group’s mediator, her work marking a middle path between gesture and geometry, the intuitive and the preconceived. In the grisaille Untitled, 1996, semi-circles, triangles, and other shapes echo those found in Müller and Frecon’s work, with its expressive brushwork siding with Fishman - at least in this series. Though always cerebral, human touch is fundamental to her work, appearing in the freehandedness of the application and the tendency to overpaint and adjust particular passages. With its practiced unfussiness and penchant for puzzles, Korman’s approach contrasts with Fishman’s more intuitive, unmediated athleticism.

Each of the artists featured here was not only important to Fishman, but to abstract painting more broadly. They, along with Fishman, count among the artists of our time who have kept the genre relevant and vital, each in her own way. Viewed in this group context, Fishman's work is distinctive in the way that each mark expresses itself physically and indexically: alive in the moment, even after that moment has passed.

Special thanks to Ingrid Nyeboe, Fishman’s widow and manager of the Louise Fishman Estate.