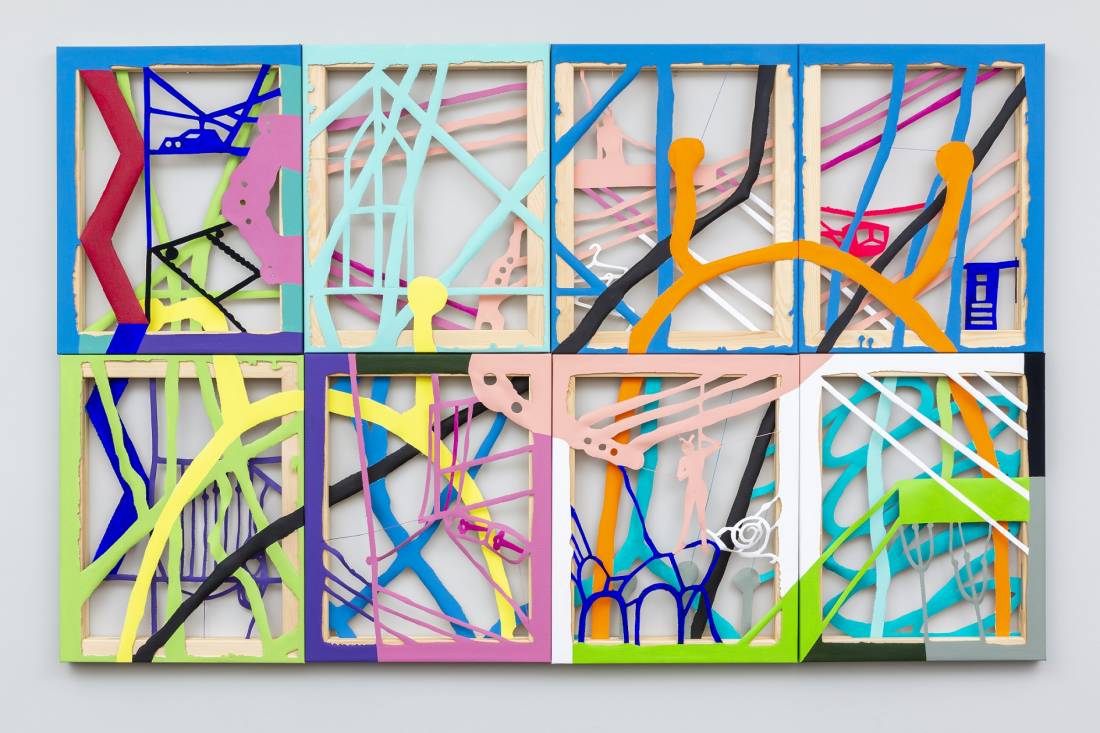 Nous sommes tous des flâneurs. After lockdowns and quarantines, the ability to cast about city streets with no clear purpose in mind other than moving one’s body and observing one’s surroundings is not to be taken lightly. And while it is still possible to assume the air of a dandy (Baudelaire) or a critic of modern life (Benjamin), wanderings during These Times seem to propose a new paradigm, one in which one scurries away from a fellow ambler, and in an urban environment decidedly devoid of bustle.

Given such an anxious context, the vibrancy of Zelene Jiang Schlosberg’s latest works might seem surprising, even welcoming. A general sense of abstraction under closer scrutiny leads to observations of helicopters, cats, doors, flora and most tellingly, alien(ated) creatures, which may or may not be self-portraits. Whether these icons constitute figurative comfort food or something more apprehensive and conceptual is up for grabs.

Jiang Schlosberg begins her art making process with sketches and then proceeds to cut canvases before applying acrylic paint and deciding on an ordering scheme. The idea of stacking, juxtaposing, and layering responds to her intense study of Old Master paintings, including triptychs, as well as the Eastern influence of Chinese ink paintings. The effect also responds to the sense of general repetition our recent times have produced: patterned itineraries without end, with discoveries made daily, even if in a desultory fashion.

Zelene Jiang Schlosberg (b.1977) is a Chinese-American artist living and working in Chicago who has been hailed for her bold approach to art-making that has resonances in both painting and sculpture. Solo exhibitions include Chinese American Arts Council Gallery (NYC), North Central College (IL), University of Illinois at Chicago, East Central College (MO) and Woldt Gallery London. She has participated in numerous group shows, including at Zhoub Art Center, CICA Art Museum Korea and The Royal British Society of Sculptors. Her painting “Directions #0” was featured on the cover of composer John Liberatore's 2018 debut CD album, "Line Drawings” (Albany Records). Her works can also be seen in Artist Talk Magazine (UK), Studio Visit (US) and Art Market Magazine (Israel). An enthusiastic lover of contemporary classical new music, she frequently collaborates with notable avant-garde musicians, who also collect her work, in addition to several museums. She is a participant at Context Art Miami (2021) with Fabrik Projects Gallery. Jiang Schlosberg received a master’s degree from Beijing Normal University.

Please RSVP your visit to this exhibition: https://forms.gle/L3i7yssEwJsmSbR36